Aeronautical Oddities
An unstructured wander through tales of the unusual. 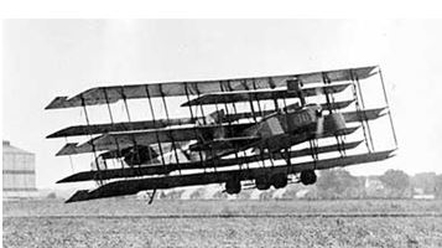 ​​Somewhere in there is a triplane, two sets of biplane wings and three Liberty motors, one pulling, two pushing . . . oh, and one and two half fuselages.  A patent was actually taken out for this septi-wing layout in 1916.  It was built in Bath, NY and by 1919 all the parts were assembled in the right order. It did fly (proof on left) although it was little better than a reluctant upward lurch.  Soon, everyone lost interest and it was scrapped.
​​The Flying Ferris Wheel

Henri van Zandt was an American living in Paris where he met Louis Chequet, a native Frenchman.  They were inspired by a Ferris wheel to design this craft.  They built and tested a model and later moved to New York to file their patents and build the full-sixe version.   20’ high and 35’ square it was powered by a 98 hp Wright engine and was intended to take off and land vertically.  Incredibly, the designers ex pected it to be able to lift 5 times its own weight. 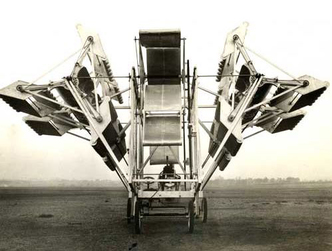 ​The ‘wheels’ turned at 200 rpm, changing to 0° pitch when travelling vertically upwards and producing lift on the way down.  The reason for the difference in the design of the blades is unclear and the effect of the central rotating surfaces is a matter for speculation. Confidently, the inventors said that, by merely ‘shifting a lever’ the machine would be able to move forwards, backwards or sideways.

Van Zandt claimed that, in a brief test, ‘they had to struggle to hold the plane on the ground’.  They believed their plane would have many advantages.  Farmers could fly at low levels and spray their crops, a motion picture camera could remain motionless over a scene and ordinary citizens could go on Sunday jaunts at altitudes of 10 to 100 feet.

As you would expect, there is no record of any flight.

In the early days of flying, designers experimented with every possible form of wing shape. One of the less-complicated structures was the delta, seen here on this Wyndham design of 1910.  Though it sported two tandem delta wings it never left the ground.
Nicolas-Roland Payen began experimenting in 1935 with a racing aeroplane which had a delta-wing at the tail and a conventional wing in front.  When the Germans invaded France they allowed him to continue but they couldn’t sort out the aerodynamics and the project was abandoned.  Nic had another go after the war with a small jet-engine in a delta but history repeated itself and the Payen PA 9 now sits prettily in a museum.
In wartime Germany there were many experimental designs.  Alexander Lippisch was concentrating on a tailless aircraft but also thought a delta could take advantage of one of the new jet engines which were on the horizon.  He ‘contracted out’ his delta research by commissioning one of the Akaflieg groups (university students affiliated to a flying or gliding club) to build a test glider.  It was almost completed when the war ended.  They were told to finish it and it was taken to the USA for wind-tunnel tests and to this day it survives, tucked away in a museum store.
The expansion of home-built aeroplanes has created opportunities for designers with less-conventional aspirations.
​This is the Wainfain FMX-4 Facetmobile. The tubular-frame body is covered with 11 flat fabric surfaces and their angles were worked out carefully after wind-tunnel and model testing.  Barney Wainfain, a NASA aerodynamicist, was the designer and builder and insisted that his Facetmobile was flying before the F-117 Nighthawk was revealed.  He climbed in through the floor, which had two clear-vision panels so that he could see the ground.  It cruised at 90 mph on its 50 hp Rotax and flew 2.253 miles to the 1994 Oshkosk meeting.  Its stall speed was indeterminate.  The pitot tube stopped working at 30° angle of attack so the ASI showed 0 mph when the Facetmobile was descending at 1000 fpm ‘under full control’.   Sadly a forced landing after engine failure ripped off the undercarriage and caused some damage, though Barney was unhurt.  Repairs proceeded ‘slowly’.  The design caused some excitement at the time.  A two-seat version was planned and the shape has been used by a series of smaller unmanned research vehicles.