During WWII the German aircraft industry produced an astonishing range of proposals for aeroplanes with advanced aerodynamics.  Many were far-fetched and impractical but a significant development was the use of wings with sweepback for high speed flight.
​
​One of the first swept wing projects to be built was the Messerschmitt P.1101.  Its wing could be fixed at 35° or 45°.  The war was nearing its end when US forces captured the prototype.  As yet unflown, it was shipped to America where it was redesigned and built by the Bell factory as the X-5.  A significant change was the ability to vary the sweep in flight from 20° to 60° and the X-5 made its first flight on 20 June 1951.  On 13 October, 1953, the second X-5 failed to recover from a spin and the pilot was killed. The cause of the accident was not attributed to the swept wing but was thought more likely to be the design of the tail surfaces.  Tests were stopped and the first X-5 sent to a museum.
Swept back wings were successful for high speed flight although there were disadvantages at slow speeds i.e. when taking off and landing.  In Germany it had been appreciated that having wings whose sweep angle could be changed in flight would be a great advantage.  But sweeping the wing back also moves the centre of lift rearwards with drastic effects on the trim.  Dr. Richard Vogt of Blohm & Voss then developed the radical idea of overcoming migrating centre of lift problems by pivoting the whole wing centrally so that it swung both backwards and forwards, the B+V P.202.
The project was passed to the Messerschmitt design team who took it a stage further with the P.1109.   Any imbalance between the forward swept and rearward swept wings could be counteracted by adding a second wing which rotated in the opposite direction – a sort of jet-powered high-speed swing-wing biplane.  This solution to countering stability problems with variable sweep sat on the back burner for many years. 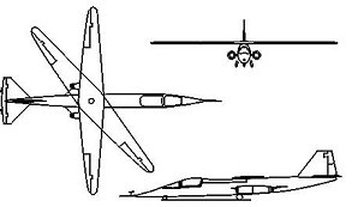 Studies carried out by a NASA engineer, Dr Robert T Jones, suggested that the use of an oblique wing on a transport jet, flying at speeds up to Mach 1.4 would yield significantly better performance than an aircraft with conventional wings.  The hardware to test the aerodynamics emerged in February 1979 as the Ames-Dryden AD-1. The oblique wing on the pivoted about the fuselage, remaining perpendicular to it during slow flight and swinging to angles of up to 60 degrees as aircraft speed increased.

A low-speed, low-cost test plane was made by Burt Rutan.  It was of fibreglass construction with a fixed undercarriage.  Powered by two Microturbo 220lb thrust engines, its speed was limited to 170 mph. Between 21 December, 1979 and 7 August 1982 the AD-1 completed 79 successful flights.
It took a little while, but in March, 2006 Northrop Grumman was awarded a $10.3 million contract for ‘the first phase of an Oblique Flying Wing (OFW) program, which aims to design and conduct flight tests of an experimental tailless, supersonic, variable-sweep flying wing’. The preliminary design effort could be followed by a second phase to finalize the design, then to build an experimental aircraft and flight test it.  First flight of this "X-plane" is planned for 2010 or 2011. 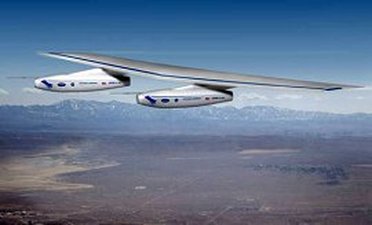 ​​And, just possibly . . .
Flight of the Switchblade is scheduled for 2020 and will cruise with its 61-metre long oblique wing perpendicular to its engines like a typical aircraft. As the aircraft increases speed, the wing begins to pivot, so that when it breaks the sound barrier, its wing has swiveled 60 degrees, with one wingtip pointing forward and the other backward. The change in aerodynamics and the general structure makes the plane very difficult to control for a human being so it will be totally controlled by an onboard computer.