Tension Over the Tasman

Charles Kingsford Smith was the pilot of the first aeroplane to cross the Pacific from the US to Australia.  His Fokker F.VIIb/3m was named Southern Cross.  This was in 1928 and later in the same year he made the first flight over the Tasman Sea to New Zealand – and back.  In 1929 and 1930 he took Southern Cross to England, crossed the Atlantic and completed the circumnavigation back to California.

Smithy and the Southern Cross
The take-off was near midnight, prolonged, because the Cross was overloaded with maximum fuel, mail and some freight, but trouble free and the lights of the Australian coast faded behind them as they headed into the Tasman night.

At 5 a.m. Taylor relieved Smithy at the controls.  He could see the first signs of dawn breaking beyond the glowing exhaust manifold of the centre engine.  His attention was drawn to a brighter spot in the glow which gradually increased as a small crack developed in a weld.  By now Smithy had returned to the controls and both men sat hypnotised by this growing split.  Flames were forcing open the crack until, suddenly, the top section of the exhaust broke off and disappeared.  ‘Instantly the most terrific vibration shook the aircraft as though some giant invisible hand had reached out to shake the life out of her’.  Smithy reached for the throttles and they watched the starboard engine shuddering to a halt revealing that one of the blades had been struck by the broken exhaust and was now a splintered stump.
With two engines at full throttle the Cross was gradually sinking and Smithy immediately turned back towards the Australian coast. They were flying at 3000 ft and land was more than 500 miles away.  They would be in the sea in half an hour.  Dump ‘anything except the mail’ said Smithy.  Luggage, tools, freight, anything non-essential went out of the door.

Taylor then began a critical calculation.  The Cross was struggling to maintain 65 mph and, indeed, any increase in speed only encouraged the broken propeller to windmill and vibrate.  The beam wind reduced their airspeed to 60 mph ground speed.  Say 10 hours at 28 gallons per hour.  They could dump excess fuel until only 300 gallons remained.  When they were finished the Cross was down to just 300 ft but holding its height. Stannage sent messages to explain their dire situation and was told that HMS Sussex would be ready to set sail in three hours to intercept their course.

In the long anxious wait, Taylor noticed a thin stream of blue smoke from the port engine.  Clearly it was burning an excessive amount of oil.  Each engine had its own oil tank but no gauge.  They had been running for eleven hours and at full throttle could run out of oil.  There was, of course, plenty of oil in the silent starboard engine’s tank. 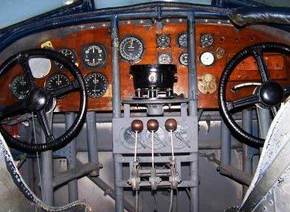 Taylor had already reached out into the slipstream to try to saw off the end of the unbroken propeller blade but this had proved impossible.  However, he thought that if he stood on the horizontal strut between the engine and fuselage he might be able to inch along and reach the oil tank.  He dismissed the thought as ridiculous – and maybe the oil would be sufficient to reach the coast.

Smithy had now been on the controls for five hours so Taylor offered to relieve him.  He was surprised at how sensitive the controls were in this narrow margin of flight.  Both centre and port oil pressure gauges were steady at 63 lbs sq/in and now that the fuel was being burnt off it became possible to ease the throttles very slightly.  Any sense of increased well-being didn’t last long.  The port gauge began to flicker and dropped back to 60 lbs.  Smithy took over again and Taylor worked out their position.  Stannage’s next message included ‘Port motor only last quarter of an hour’. 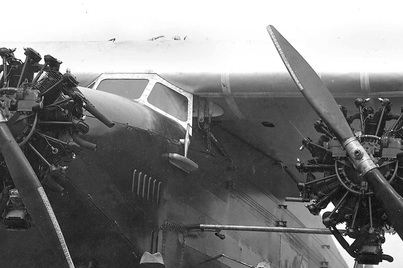 ​Taylor checked the gauge again – it was down to 35 lbs.  However ridiculous, his plan had to put into effect.  Some line from the mailbag lashings tied round his waist with the other end fixed in the cabin gave a semblance of security.  He tightened his coat and took off his shoes. Climbing carefully out of the window he managed to get both feet on the starboard strut.  With his shoulders braced against the wing he inched towards the engine.  There was a short terrifying gap when he could not reach the engine without releasing his grip on the fuselage.

Unlatching the side cowl he let it go.  Stannage passed him a spanner to loosen the drain plug and the casing of a thermos flask to collect the oil. This was filled and handed back to Stannage who emptied some radio parts from a small leather suitcase and poured in several flasks of oil.  When Taylor finally got back into the cabin the oil pressure was down to 15 lbs.
With no time to recover from his exertions he clambered past Smithy onto the port strut.  The combined slipstreams of the centre and port engines were too much to allow any further movement and he could only cling to the handholds on the fuselage.  Smithy opened the throttles to full power.  The Cross struggled up to 700 ft and the port throttle was closed to idle.  Taylor inched across to the engine and jettisoned the cowl flap to get at the oil tank.  Shouts from Smithy warned him to hang on tightly.  The wheels were almost brushing the waves as the engine burst into full power again and the Cross climbed slowly back to 700 ft.

The engine was idled again and the first flask was passed across.  The oil which had not blown away was poured into the tank.  Reaction came in seconds.  There was shouting and thumbs up from the cabin.  Oil pressure was back on the gauge.  Overcome with the exhilaration of the moment and the exhaustion of his physical efforts Taylor almost fell off his precarious perch.  But the cycle of successive climbs and oil transfer had to go on until the suitcase was empty.  After his final painful shuffle back to safety Taylor was rewarded with the sight of the gauge reading 63 lbs.  He collapsed on the cabin floor.

They were still two hundred miles from land and all the effort had transferred less than a gallon into the port oil tank.  In half an hour the flickering needle meant that it all had to be done again.  To add to their worries the port engine began showing signs of distress, occasionally misfiring and constantly over-heating.  Smithy reluctantly decided to ditch the mail to keep the Cross in the air.  Taylor became well practised in the cumbersome transfer process.  Incredibly, he did it no fewer than six times, the last being just 30 miles from the coast.

Smithy coaxed the Cross back to Sydney’s airport.  As the engines were finally shut down Taylor reflected that the centre engine, which had run for so long without complaint, was the one which he had seen in pieces before the flight.

For his heroic action which saved the Southern Cross and three lives Gordon Taylor was awarded the Empire Gallantry Medal.  This later became the George Cross, the highest civilian decoration.

His writing is of the highest quality and several of his books are readily available and highly recommended.  The most comprehensive is ‘The Sky Beyond’ which covers the first 35 years of his flying life.  It should be on every aviation enthusiast’s bookshelf.