The F-106 all-weather interceptor was developed from the Convair F-102 "Delta Dagger with extensive structural changes and a more powerful engine. The first F-106A flew on Dec. 26, 1956, and deliveries to the Air Force began in July 1959.
​
This 106 was involved in an unusual incident. During a training mission from Malmstrom AFB on 2 February 1970, it suddenly entered an uncontrollable flat spin forcing the pilot to eject. Unpiloted, the aircraft recovered on its own, apparently due to the balance and configuration changes caused by the ejection, and miraculously made a gentle belly landing in a snow-covered field near Big Sandy, Montana. After minor repairs, the aircraft was returned to service. 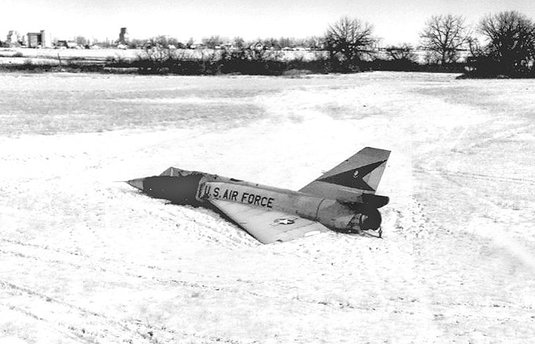 I enjoy receiving your newsletter every month; there is always something of great interest in each edition. The item on the F.106 caught my attention as I flew one of the early development aircraft at Edwards AFB in July 1959. I was invited by the USAF to evaluate and give an opinion on the three Century Series fighters: F.104, 105 and 106 in comparison with the Lightning which I had been testing at Boscombe Down for the previous six months. I completed 4 flights in each in 3 weeks and found it a very interesting exercise.
​
The 106 was undoubtedly the best of the bunch. It was easy and pleasant to fly and had an impressive performance out to Mach 2.0. The powered flight controls were exceptionally well harmonised and unusually free from friction and backlash. The Pratt & Whitney J75 engine had considerably better handling and performance than General Electric’s J79 which was having a great deal of trouble at that time fitted in the F.104 – as I found out, but that is another story.

As to the episode of the 106 spin and relatively safe landing, this does not surprise me. Delta wing aircraft have very poor spin recovery characteristics. Glosters lost 3 Javelins and 2 pilots during their spin investigation programme, and at Boscombe we lost one aircraft, over the Isle of Wight, though the pilot ejected safely. The problem arises because as the spin develops the nose comes up from a diving attitude almost to the horizon. The airflow is then almost 90 degrees to the wing and it is virtually impossible to generate a strong enough up force from the elevons, or tailplane in the case of the Javelin, to get the aircraft into a dive and so restore the airflow to more normal control conditions.

However, if the pilot ejects, the force of the seat being fired out of the nose of the aircraft imposes sufficient down force to get the aircraft out of the spin. We had an example of this with the Hunter Trainer (Mk7). In 1958 I led an extensive investigation - some 500 spins of varying nature - into the spin recovery characteristics so that the RAF could teach Hunter spinning to budding fighter pilots at Chivenor. After giving the chief instructor some spinning flight experience at Boscombe, on the first training sortie at Chivenor the aircraft failed to recover until the student ejected. The aircraft promptly recovered and the instructor flew the Hunter back to base. However, the RAF decided it was not for them and permanently withdrew the clearance for intentional spinning in Hunters.

Back to the F.106, I doubt if it did recover from the spin after the ejection because, lacking flaps, deltas tend to have high landing speeds at unusually high nose attitudes. It would be hard to believe that an aircraft with those characteristics could successfully do a wheels-up landing without someone at the controls. On the other hand, in their normal flat spin attitude deltas descend relatively slowly in an almost vertical flight path. Our Javelin that landed in the Isle of Wight was found with a telegraph pole stuck vertically through one wing, and the surrounding land was barely disturbed by the arrival.

So I would say that the 106 spun all the way down to the ground. And if it landed in snow, as it appears in the photograph, little damage would be caused and it would not be difficult to repair it for service use.