2015 has seen the commemoration of quite a number of events which took place 100 years ago e.g. Gallipoli and also 70 years ago when WWII came to an end.  In defence of other, often overlooked years, we could be different and dip into the history books to see what happened in aviation 80 years ago.  This list unearths some interesting tales.

The 1930s was the era of long distance record flights.  Pilots looked for new routes to blaze their trail, or returned to already flown routes where, although they could not be first, they could be faster. 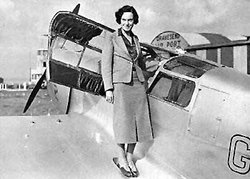 New Zealand’s aviatrix was the glamorous Jean Batten.  She learned to fly in England, bought a Gypsy Moth and, at the third attempt, flew to Australia, knocking four days off Amy Johnson’s record.  The following year, 1935, she flew back to England in 17 days, 15 hours.  Then she discarded the Moth, helmet and goggles and bought a Percival Gull, in which it was easier to apply her make-up before landing.  In November, her 5000 mile flight from England to Natal, Brazil took 61 hours, 15 minutes, a world record. 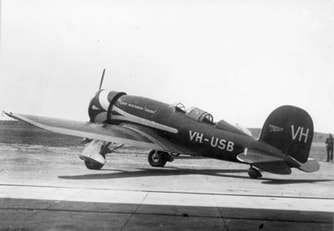 In 1930, flying solo, he won an England-Australia air race.  He was knighted in 1932.  In 1934, back in Southern Cross, he made the first eastward crossing of the Pacific in a Lockheed Altair, named the Lady Southern Cross.  Although he’d been unable to take part in the 1934 MacRobertson race, he planned an attack on the winners Scott and Campbell Black’s record breaking England to Australia flight in the DH Comet.

In the Lady Southern Cross, Smithy and his co-pilot Tommy Pethybridge reached Allahabad in November 1935, left there for Singapore - and disappeared.  Extensive searches found nothing.  18 months later, an undercarriage leg, buoyed by its still inflated tyre, was washed ashore in Burma.  (In 2011, an expedition found wreckage of the Altair less than 2 miles off the coast of Myanmar).
With his eye on the world speed record Howard Hughes powered his H-1 Racer with a Pratt & Whitney radial specially tuned to produce 1000 hp.  It was an exceptionally clean design using flush rivets and meticulously fitted panels and u/c doors.  Just a month after its first flight Hughes took the Racer and repeatedly broke the record over four successive laps with a fastest speed of 352.39 mph.  He ran out of fuel and belly landed the Racer in a beet field.  After repairs, longer wings were fitted and Hughes smashed the coast–to-coast record.  The H-1 was the last privately built aeroplane to attack the speed record. 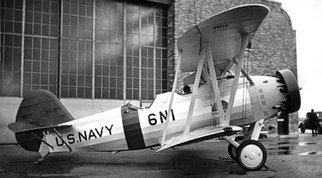 The Aeronautics Branch of the US Department of Commerce began experimenting with the use of radio beams to develop navigation aids for pilots in1926, initially using a war surplus DH4.  At the same time the US Army was developing gyroscopic instruments to enable pilots to fly in zero visibility.  In 1929 the culmination of this work was demonstrated by the world’s first ‘blind’ flight, from take-off, return to base and successful landing.  The pilot was one Lt James Doolittle.  In 1935 there was an even more impressive demonstration.  Navy Lt Frank Akers, also flying blind, took off from a naval air station in a Berliner-Joyce OJ-2, located the carrier USS Langley at sea and landed on it.  Curiously, despite this achievement, the Navy wasn’t impressed and refused funding to take it any further.
But the Department of Commerce saw the value of radio beam landing equipment and ordered it to be installed at all major US airports.  In Europe, similar work had been pursued by the German Lorenz company.  Dr Ernst Kramer developed twin beams which were received by the pilot as different intermittent signals.  Where the beams overlapped, in line with the runway, the signal was continuous.  The system was sold all over the world and its first UK installation was at Croydon airport in 1935.  (The RAF used it as SBA, Standard Beam Approach, until as late as 1955).

Another 1935 German innovation which would spread world-wide was the introduction of colour coding for aircraft controls.  They used red for fire circuit breakers, green for temperature regulators, yellow for throttles and brown for hydraulics.

In the UK, the international situation stirred Parliament into action and they voted to treble the number of first line military aircraft.  That meant orders for another 1500 aeroplanes.  One of the contracts was placed with Vickers for 96 new monoplane bombers, designed by Barnes Wallis.  The Wellesley first flew on 19 June 1935.  Its geodetic construction was thought to be unsuitable for an internal bomb bay so special carriers were hung under the wings.  Although it has now largely faded into history the Wellesley made its mark with a world record.  Fitted with extra fuel tanks, three took off from Ismailia, Egypt.  One had to land just 500 miles short of the destination, but two reached Darwin, Australia.  The 7,162 mile flight was a record which stood until 1945 and is still the longest flight by a single-engined aircraft.  Most of the Wellesley’s service was in the Middle East but it did see action.  Mussolini had invaded Abyssinia in 1936 and, when he joined in the war in 1940, the Wellesley helped to clear the Italians out of East Africa.
First flights came thick and fast in 1935 – and not all were military prototypes.  The air-minded owner of the Daily Mail, Lord Rothermere, wanted a 6 passenger aeroplane and Bristol happened to have a new design with twin 365 hp engines.  Since Rothermere had asked for ‘the fastest civil aircraft in Europe’, Bristol updated their design to take 645 hp Mercury engines.  The result, the Bristol 142, named ‘Britain First’, caused some consternation in the RAF with its top speed 30 mph faster than the fastest fighter. 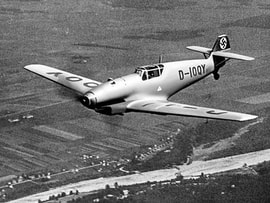 Not before time.  The prototype Bf 109 had preceded it by five  months, though not fitted with its intended Junkers Jumo engine, which was not ready.  Instead, Messerschmitt used a Rolls Royce Kestrel.

​The Kestrel was also the preferred powerplant for the Junkers 87.  The prototype was built in secret in Sweden.  The German Air Ministry were unconvinced that they needed it and the early crash of the prototype almost caused its cancellation.  It was only after much redesign, the use of a more powerful, and German, engine and also strong political manoeuvring by Ernst Udet that it was accepted.
​Another new type in Germany was the Heinkel 111 – that’s the civilian mail plane, of course.  It was only later that they converted it into a bomber
In the US, 1935 prototypes included the Douglas XTBD-1 which led to the Devastator torpedo bomber.  In later service it was not distinguished but it was the first naval all-metal aircraft and the first with an enclosed cockpit and hydraulically folding wings.
Showing greater promise was the Boeing Model 299, the fore runner of the Flying Fortress 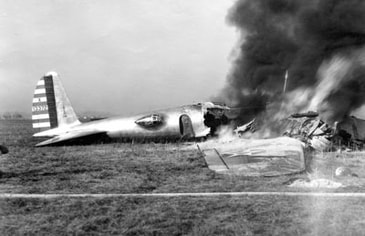 The Model 299 was a private venture funded by Boeing and greatly impressed the USAAC.  It was being evaluated with an Army Major as co-pilot alongside Boeing’s test pilot Les Tower.  On take-off, the nose reared up and the aeroplane stalled, crashed and burned, killing both pilots.  It was immediately found that the elevator control locks had not been removed.   Nevertheless, the Army placed an order for 13 YB-17s. Also, the checklist, which some pilots considered an insult to their ability, was introduced,
Ballast and fuel were jettisoned and the Macon rose above pressure height causing more helium to valve off.  The Macon sank rapidly and crashed into the sea. All but two of the crew survived but the accident spelled the death of rigid airships in US Navy service.

Russia appears in this selection of events because of its own high-profile accident. The Tupolev ANT-20, Maxim Gorky, was the largest aircraft built using Junkers-style corrugated skinning.  Its eight 900 hp engines lifted 116,000 lbs.  Designed to spread propaganda it was equipped with a printing press, library, film projector, radio station and loudspeaker. On 8 May a demonstration flight over Moscow was planned along with three diminutive fighters to emphasize the size of Big Max.  To liven up the display, a fighter would perform a barrel roll around the Tupolev. The first two rolls seemed to go well then Nikolai Blagin, one of the fighter pilots, thought he could make it more exciting.  He did.  He collided with the Tupolev and both aircraft crashed, killing the pilots and 33 passengers. (The second ANT-20 also crashed when the pilot allowed a passenger to take his seat and he accidentally knocked off the auto-pilot).

Hawaiian volcanos don’t explode. They spew out copious quantities of molten fluid lava onto the shallow slopes. The flow often travels at walking pace and, in the past, attempts to divert a threatening flow by building walls of heaps of stone had been futile.  The Christmas-time eruption resulted in a flow which headed towards Hilo, the largest town on the island.  Increasing public concern demanded action.