Gransden Lodge - June 09
After the 1936 Olympic games in Berlin, Germany succeeded in getting gliding included in future events. A competition to find a suitable design for the 1940 games was announced and Hans Jacobs produced his Meise.  The prototype flew in February 1939 and the following month it was declared the winner and renamed Olympia.  Plans were sent to competing countries and several examples were built in Europe, Turkey and the USA.  However, the war removed gliding from any Olympic involvement.  Several German Olympias became war booty and one was brought to the UK and modified slightly by Chilton Aircraft, first flying in August 1946.  It was taken up by Elliotts of Newbury, a pre-war furniture manufacturer who had produced wooden components for many wartime aircraft, including the Mosquito.  For some reason, the Board of Trade would not allow them to start making furniture again but gave approval for the production of 100 Olympia sailplanes with 75% intended for export.  Their prototype appeared in January 1947 and with its good performance (gliding angle 1:25) and smooth handling characteristics it soon became the glider at the peak of competition enthusiasts’ ambitions.  In May 1961 Bill Bedford, then a Flight Lieutenant and later Harrier test pilot, helped to establish its credentials with a record flight from Farnborough to a declared goal, Usworth, near Sunderland, flying 250 miles in 6 ¾ hrs. 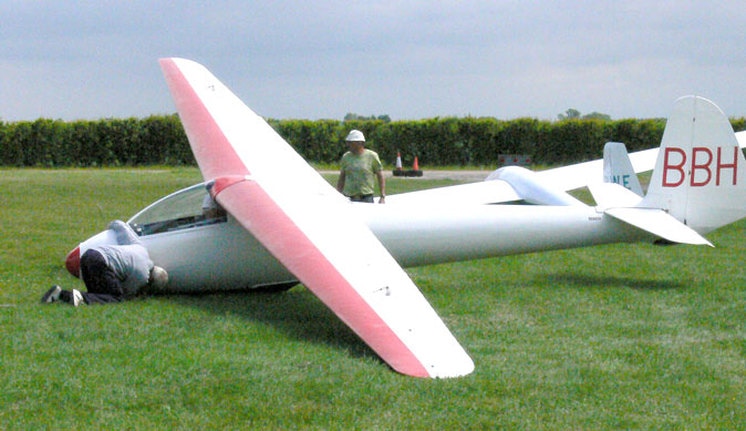 ​               Olympia 2b
Although it retained the name Olympia, the 463 was a completely new 1963 design using a laminar flow wing section.  Whilst pleasant to fly, its 1:32 gliding angle was uncompetitive and only 48 were produced.
​Alexander Schleicher’s Ka-6, designed by Rudolf Kaiser, first flew in 1955.  It won the prize for the best Standard Class (15m span) design at the 1958 World Championships.  In the 1960 competition, 5 of the first 6 places were taken by Ka-6s and in the next World’s 15m class more than half the entries were Ka-6s.  In 1963 two Ka-6s were flown 876.0 km from Germany to France, setting a world distance record.  The Ka-6CR’s 1:30 gliding angle was later raised to 1:34 by the Ka-6E which incorporated improvements including a glass-fibre nose and all-moving tailplane.  Although its performance has been overtaken by later designs hundreds of owners still enjoy its delightful handling

Most of the other gliders at the rally were made by Slingsby, for years the mainstay of British glider manufacture.  In 1916 Fred Slingsby was an RFC mechanic and was offered a ride in a BE2c to ‘see the lines’.  Over the Ypres salient they were attacked by German aircraft.  Fred said ‘The machine started to buck and jump about and I realised the pilot was dead.  I shut the engine off and glided across our lines and landed with the undercarriage shot away’.  He had never piloted a plane before and was awarded the Military Medal for his courage.

After the war he became a partner in a cabinet making firm in Scarborough and saw some of the first gliding attempts by enthusiasts in 1929 when the British gliding movement started.  He decided to build a glider himself.  The London Gliding Club persuaded him to sell it to them then he was asked to build another for a Birmingham businessman.  ‘Afterwards,’ said Sling, ‘I was overwhelmed with orders and never did get one for myself.’
​
A rich enthusiast in Kirbymoorside offered to finance a factory to provide work for local labour if Fred would run it.  At first there was only the civilian sporting market then the great expansion came in WWII with orders from the Air Training Corps and the production of assault gliders for the army. Sling’s own design, the Hengist, was unsuccessful.  It was said that he made its flying characteristics too good and the simpler and less elegant Horsa won the production contract.

Post war, the factory produced a wide range of training and competition gliders.  It moved into powered aircraft production with film replicas (SE 5a, Camel and Rumpler) followed by the Tipsy Nipper and finally the T67 Firefly 2-seat aerobatic trainer, sold all over the world to civilian owners and many airforces including - to fierce home-based opposition, the USAF – but that’s another story.  After Fred’s death, the firm changed hands several times and now has no connection with aviation.
​
Fred Slingsby designed his T-21 two-seat trainer as an enlarged version of the pre-war German Grunau a prolific light-weight soarer which Sling had built under licence.  The prototype was built in 1944 and offered to the ATC.  But there was no money in the kitty and the offer wasn’t taken up until 1947.
Meanwhile the prototype had been pulled out of storage and accepted by civilian pilots, at first reluctantly but they were too short of anything to fly to ignore it.  It became an instant hit and the first production version, sold to the London Gliding Club at Dunstable, is still in use today.

Many were used by the Air Cadets as the Sedbergh Tx 1 and large numbers were exported to India, as well as to Egypt, Jordan, Kenya, Malaya, the Netherlands, Pakistan, Portugal, South Africa and Sweden.  With a gliding angle – on a good day - of 1:21 it’s no cross-country performer but its open cockpit and floating flight generate immense affection. Over 100 are still in use around the world, sporting names like Daisy, Lucy as well as the usual ‘the barge’.

Cambridge Club’s T-21, ‘Bluebell’, on its ingenious storage rack to reduce its dominance of the floor in a crowded hangar.
​ 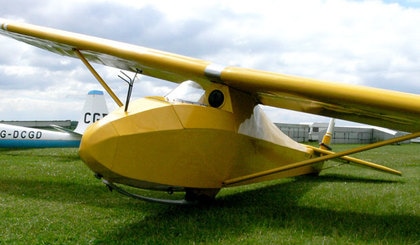 ​The Prefect (1949) was a rather disappointing attempt to replace the ubiquitous Grunau, with a gliding angle of just 1:21 and uninspiring handling.  But the Air Cadets who advanced to the stage of flying it thought it a real ‘hot ship’.

The wing was enlarged yet again to 18m for Marks 3 and 4 (1:36).  This had the potential to be a world-class competition winner.  By now the enlarged centre-section was too heavy to be carried comfortably by two strong men and the Skylark 4s became notorious at clearing the field of volunteers when one emerged from its trailer to be rigged. 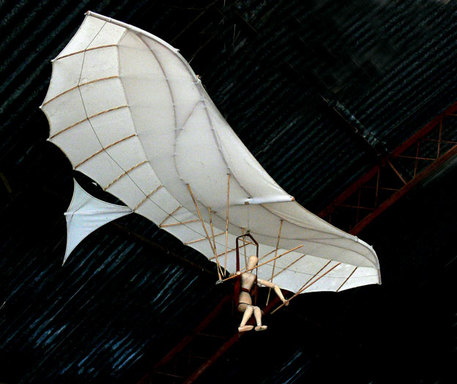 And finally . . . found in the hangar. Definitely not a rally entrant.

​I really enjoyed reading the well researched article on Fred Slingsby and the photos taken at Gransden Lodge. Well done. You may be interested to know that I am still part owner of a Slingsby T49 'Capstan' kept at Gransden Lodge. (2 seat side by side dual control with full canopy).  It was refurbished and repainted three years ago and is one of several still flying.  In fact, a superb example was sold after refurbishment to the USA a couple of years ago for about £10k!  I believe the BGA still use one for instructor training.
Three years ago I flew the Capstan quite intensively, as safety pilot to a former WWII RAF Horsa Glider pilot, - then aged 80+, to achieve his personal ambition of 1000 hours logged in gliders.  We flew about 200 hours that year in just about every met condition imaginable and achieved his target. Two years ago following refurbishment, the Capstan was flown by two fellow syndicate members (both instructors) who, having rigged and completed all pre-flight checks, discovered whilst on aerotow that the rudder cables were crossed!  They were both wearing parachutes and this bought them options.  Their decision to stay on tow to gain maximum height almost certainly saved their skins.  Having established the extent of the control conflict, they opted to land the aircraft rather than bail out.  (One of the pilots had some years previously survived an horrendous stall/spin crash and did not fancy another earthly contact onto already severely damaged ankles).  Suffice to say that their landing, whilst not pretty, was successful and the aircraft was undamaged.


Thanks for that interesting tale, Ray.  Slingsby designed and built the T-49 in 1962 hoping to replace the Air Cadets’ entire fleet of T-21s and T-31s.  Sadly, it failed to find favour with Her Majesty’s Airships but enjoyed some success in civilian clubs.

Where did the name ‘Capstan’ come from, so divorced from any gliding connotations?  Well, the prototype was bought by W D & H O Wills, the tobacco firm, and presented to the British Gliding Association along with the name of Wills’ Capstan cigarettes.  The BGA toured the clubs with their new acquisition and orders began to flow.  The second T49 was bought by Lasham Gliding Society with the help of a grant from Watney Mann who poured beer on its nose and christened it ‘Red Barrel’.  That name seems to have evaporated with the beer.  Capstan stuck and was applied to all T49s, 34 in all.  The Capstan might not have captured hearts like the T-21 but it did have one lasting effect on the entire gliding movement.

It provided an excellent training environment and was adopted by Lasham as their standard training machine.  But they soon found a problem, graphically highlighted by Ray’s colleagues.  The then standard pre-flight cockpit check, CISTRS – (Controls – Instruments – Spoilers – Trim – Release – Straps)  had for years worked well enough in the T-21, T-31 and most other gliders.  However, the Capstan pilots sit directly ahead of the wing which effectively blocks their view of all the control surfaces.  Another consideration – it was essential to check the pilots’ weights and, if necessary, add ballast to keep the CG within limits.  These weights were fitted on the floor of the cockpit and weren’t accessible when the crew was aboard.

So the check was changed to CB-SIFT-CB, which suits the Capstan perfectly.  Controls (check full free movement in the correct sense, visible whilst standing alongside the cockpit) - Ballast (now you can climb in) - Straps – Instruments - Flaps (for those gliders fitted with them) – Trim - now close the Canopy - and check the (air)Brakes.

If you take advantage of the gliding the AEG has planned at Little Gransden later this month, you might overhear the trainees chanting this litany as part of their cockpit check.  They, and probably their instructors too, don’t appreciate that this song was originally written for that increasingly rare trainer, the humble Capstan. ​