In retirement he joined Lasham Gliding Society where I knew him as an occasional member of the ‘Thursday morning breakfast club’ – get there early, pull out and DI the gliders and tow them to the launch point then in to breakfast at 8.30 before the morning’s flying. It was some time before I realized who this quiet unassuming man was. He took his fair share of the chores and was always a willing volunteer to help with glider rigging.

He told us that he took up gliding in the Fairey FD-2. 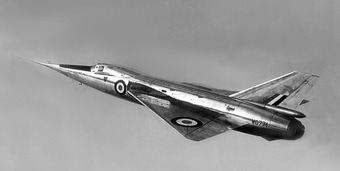 Back in 1954, on the 14th flight of the FD-2, Peter took off from Boscombe Down and climbed to 30,000 ft. Glancing at the fuel gauge he was amazed to see it steadily wind back from ‘Full’ to ‘Empty’. The rev counter promptly followed suit and the engine stopped. He turned his ‘glider’ back towards Boscombe Down, using the controls carefully to conserve the limited hydraulic power still available.

Following guidance from the control tower he broke cloud below 3000 ft and was relieved to see the runway 6 or 7 miles ahead. There was sufficient hydraulic power left to lower the nosewheel, but not the mainwheels. Nor could he lower the ‘droop-snoot’ which gave him a view of the runway on landing. He crossed the threshold at 230-240 mph and held off for a blind landing.

After sparking along the runway for over a mile the FD-2 veered off onto the grass. Concerned that the jolting could set off the ejector seat, Peter jettisoned the hood and leapt out as the aircraft slowed to a stop.

A valuable aeroplane had been saved and Peter earned the Queen’s Commendation for Valuable Service in the Air.

What had caused the problem? – a small section of loose sealing strip had been cut off in case it was sucked into the intakes. The resulting tiny gap allowed pressure to build up in the fuselage and the rubber fuel tank had collapsed. 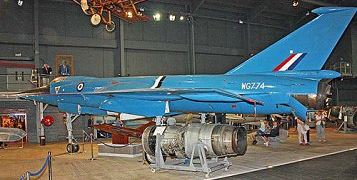 The FD-2, now in its post-record colour of celebratory blue, can be seen in the FAA Museum at Yeovilton.


This and the other interesting tales in Peter’s full life can be read in his autobiography ‘Faster than the Sun’, first published in 1963 with a revised edition in 2005. ​​