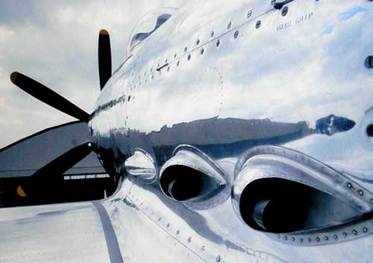 In 1942 the US was gearing up its production of aeroplanes and called in the experienced mass production practioners – the automobile industry.  Henry Ford built the famous Willow Run factory to churn out a stream of Liberators.  The giant Fisher Corporation, who made car bodies for General Motors, were contracted to produce many parts, engine nacelles, tail sections, gunturrets etc., for Boeing’s new B-29.  But Fisher wanted to do more and had aspirations to deliver complete aeroplanes. 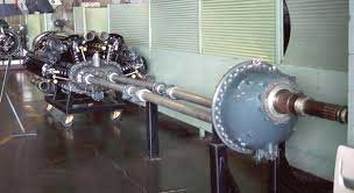 ﻿The USAAC had issued a specification for a fast-climbing interceptor fighter. So Fisher hired Don Berlin to design a fighter to meet this spec.  In his previous job as Curtis’s chief designer Berlin had developed the Hawk series of fighters, P-35 to P-40 Warhawk.  For the new XP-75 he chose the most powerful engine available, the 2,600 hp 24- cylinder Allison  V-3420.  This was actually two V-1710 engines coupled in W-formation and driving contra-rotating propellors.  This resulted in a wide powerplant so Berlin mounted them in the widest part of the fuselage (Bell Airacobra style) using long shafts to drive the props.


Aiming to speed up the design and production process he decided to complete the fighter by using existing components from other aircraft – the wings and radiator of the P-51 Mustang, rear fuselage and tail of the Douglas Dauntless and the beefy undercarriage of the Vought Corsair.  The initial inverted gull wing layout was soon abandoned and P-40 Warhawk wing panels used instead. Armament was to be the good old .50 calibre machine gun, six in the wings, four more in the relatively empty nose.
The first of two prototypes flew on 17 November 1943.  There were problems, of course. The engine suffered from overheating and failed to give its promised power.  Aileron control and spinning were unsatisfactory.  The government had already ordered six more prototypes of a revised model so development continued with the  intention of a production run of no fewer than 2,500.  The P-75A, which first flew in September 1944, had a bubble canopy and redesigned tail unit and gradually the bugs were ironed out. 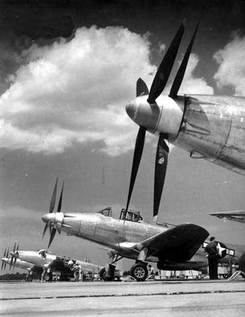 But events had overtaken the P-75.  Its performance was still below specification and the P-47 and P-51 had shown their considerable capabilities in action, so the contract was cancelled. The sole survivor of this unhappy episode now sits in the Wright-Patterson Air Force Base Force Museum in Dayton, Ohio.

Post-war, Don Berlin re-started his successful career when he joined McDonnell Aircraft (Demon and Voodoo jet fighters) and later moved to Vertol where his Vertol 107 was developed into the Boeing CH-47 Chinook.