Most people have heard of the ‘ball-bearing airline’ - Mosquitos flying from Scotland to Sweden, bringing back vital supplies of high quality Swedish steel ball-bearings and the occasional passenger tucked in the bomb-bay.  To preserve Sweden’s neutrality the crews were BOAC civilians.  What is less well known is that the early flights, starting in August 1942, were flown by the humble Whitley, by then withdrawn from bombing operations.  Also used were four Lockheed 14s (the civilian Hudson) and two Lockheed 18s (Lodestars).  The first of six Mosquitos took over in February 1943 and were occasionally joined by DC-3s, Liberators and Yorks and even, for one flight only, the prototype Curtis Commando, then owned by BOAC. 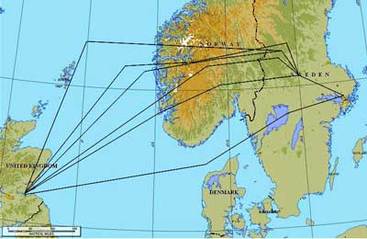 Most, though not all, journeys were flown at night.  Some flights crossed the mountainous part of central Norway but the shortest route was across the Skagerrak between Norway and Denmark. There was a gap in the German radar coverage and, provided the aircraft kept below 1000 ft, it would be invisible to the radar.  Even if detected, a cruising Mosquito could outrun the Ju 88 night fighters at their maximum speed.  To help this, the Merlins’ exhaust stub baffles were removed, adding 16 mph to the speed.  It was only by employing standing patrols and later, a small number of Fw 190s,  that the Germans could hope to catch the flying couriers.  In over 1000 flights, four Mosquitos were lost, with eight crew and two passengers.  The Mosquitos operated from December 1942 to November 1944, although there was an irregular resumption of service in the last six months of the war.
The passengers enjoyed a makeshift seat in the bomb-bay which was lined with felt to give a semblance of warmth. There was oxygen, intercom and a reading lamp.  One of the exclusive passengers was Niels Bohr, the atomic physicist.  He was very quiet and didn’t respond to the pilot’s calls.  Guessing that he was suffering from oxygen failure and might even have died the pilot descended to a lower level.  After landing, Bohr emerged, totally unaware of the crew’s concern and said he’d ‘slept like a baby’.  Other passengers included Malcolm Sargent, the conductor, and Peter Middleton, grandfather of Catherine, now Duchess of Cambridge’.

BOAC’s limited cargo capacity was quite inadequate to cope with a growing problem. Eager to join the war were several thousand displaced Norwegians and Danes and a considerable number of US aircrew who had force landed in Sweden.  The RAF was reluctant to get involved so the Norwegian government-in-exile turned to the Americans. They had just the man for the job.

Bernt Balchen, a Norwegian-born pilot and engineer, was the first explorer to fly over both geographic poles.  He had been specially recruited as a Colonel in the USAAF to establish the Bluie West 8 landing ground in Greenland for the trans-Atlantic ferry route and he even led a bombing raid on the German weather stations in Greenland.  He was a positive hard-driving achiever to whom difficulties and danger were challenges to be overcome.  His standard response was ‘Ve do it’.  He recruited a number of US aircrew who had experience of the Carpetbagger operations which dropped agents and supplies over Europe.  He was given five war-weary B-24s, painted dark green or black without markings and he put his crews into civilian clothes.  With some string-pulling at high level he was allowed to use RAF Leuchars, the base of BOAC’s Mosquitos.

The first flight of what became known as the Vedoits was on 31st March 1944 and Balchen’s Liberator landed at Bromma airport, Stockholm, parking alongside a swastika marked DC-3. Although immediately recognised by a German he had met before, Balchen skated on the thin ice of neutrality and intrigue to run his independent and semi-piratical organisation.  More than 4000 men, of many nationalities, were flown to Leuchars and later, also to RAF Metfield, a comparatively isolated base in Suffolk.  When Balchen began to fill his empty Liberators with supplies to be dropped to resistance groups as they crossed Norway on the way to Bromma a separate Operation Ball was set up. They used another six Liberators, fully armed with standard US markings and manned by service crews and even continued operations throughout the long daylight of the Norwegian summer.

In June, 1944, two V-2 rockets crashed in southern Sweden.  The Germans had deliberately aimed them at Sweden so that the expected protest would give them a precise position and thus range of their test missiles.  But the Swedes kept quiet and carefully collected all the wreckage.  The four ton load of crated parts was too awkward to get into a Liberator so Balchen ‘borrowed’ an old DC-3 from the USAAC to fly the V2 parts to Britain.

As the war drew to its close the Norwegians became concerned that it might prove difficult to clear German troops from northern Norway.  They set up Operation Where and When and Balchen flew a stockpile of supplies, police troops and even a field hospital to northern Sweden, often using strips marked out on the ice of a frozen river.

The fleet of Liberators and DC-3s expanded to twenty-two, plus frequent temporary additions, all maintained by 250 personnel stationed permanently in Stockholm.  The Swedes even extended their runway to make it safer for the heavily loaded Liberators.  This extract from his autobiography ‘Come North with Me’ gives a flavour of Balchen’s style. 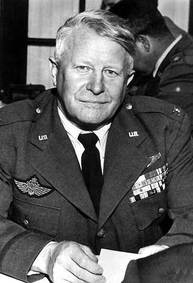 ‘One day, one of my Liberators cracks a cylinder head on a flight from Leuchars.  Knowing that the DC-3s the Germans are operating between Berlin and Stockholm using the same kind of engines, I ask my friend Carl Florman of the Swedish airline to borrow a spare cylinder from the Lufthansa representative at Bromma.  The German replies that he does not have one on hand in Stockholm, but will arrange for one to be sent up from Berlin on the next plane.  The following day the air transport delivers a cylinder from an American B-24 which has crashed in Germany and I install it in my Lib and fly it back to Leuchars.  There I get a spare cylinder and take it to Stockholm the next day to replace the one borrowed from the Nazis’.

After the war ended Balchen’s services were properly recognised by the award of the US Legion of Merit, plus decorations from Norway, Sweden and Denmark.  He died in October 1973 and was buried in Arlington Cemetery on what would have been his 74th birthday.