Mike was just 18 when he started his career as an air traffic controller at Liverpool’s Speke airport in 1970.  He went to work in a tower which was at the top of an impressive 1930s building.  There were no stairs for him to reach his workplace, just a small two-person lift.  The heavy manual gate had to be closed firmly for the lift to respond to a call and this procedure was stressed firmly on all newcomers. 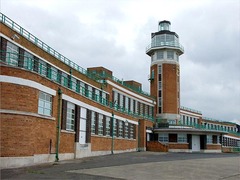 Night shifts were usually very quiet and the tower building was normally locked to prevent any unauthorised access.  So Mike and his colleague in their isolated eyrie were surprised one night when there was a loud clang as the lift set off towards the ground floor.  Then there was silence.  No one got into the lift and pressing the call button got no response.  The fire service had to be called to get the keys and open the building.  They found it deserted with the lift at the bottom of its shaft with wide open doors.  The senior controller merely shrugged.  ‘Bloody Captain Black again’, he said.  Mike had heard remarks about a mysterious ‘presence’ around the airport and had paid little heed to them.  But this event set him onto the trail of ‘Captain Black’. 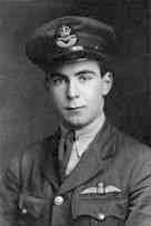 Thomas Campbell Black (1899-1936) joined the Royal Naval Air Service in WWI.  Absorbed into the newly formed RAF he left the service after the war with the army rank of Captain.  He moved to Kenya where he began breeding horses.  He and two friends imported a DH51 (the very aeroplane which currently resides in Shuttleworth’s hangar) in which they carried out many pioneering flights, opening up East Africa to aviation.

By all accounts, Tom Black was charming and witty and acquired loyal friends easily.  In 1929 he persuaded a wealthy lady to buy a DH Moth and start an airline, of which he became Managing Director and Chief Pilot.  This flourished to have eventually seven aeroplanes, including a three-engined Fokker.  In the process Black carried out a number of notable flights – his was the first aeroplane to land in Zanzibar, he carried out a successful forced landing when all three engines of the Fokker quit, he flew as the personal pilot to the Prince of Wales when he visited Kenya and gained international recognition when he searched for and rescued Ernst Udet (later to become one of Hitler’s Luftwaffe generals). 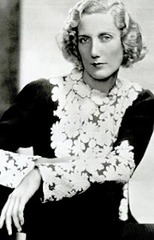 He became involved with Beryl Markham, a horse trainer and noted eccentric.  When her lover was killed in a Gypsy Moth she immediately asked Tom Black to teach her to fly – in a Gypsy Moth.  Within four weeks she had soloed.  He also taught his eager pupil to maintain her aeroplane and engine and they inevitably became lovers.

Black was the awarded the Mansfield Robertson Trophy by the Aero Club of East Africa for the most meritorious flights in 1929 and 1930 but in 1932 he decided to return to England.  Beryl was devastated by his departure and re-acted by following him, flying solo in an Avro Avian she bought especially for the purpose.  But she was too late.  Black had met the beautiful Florence Desmond, an actress and radio comedienne.  (Beryl later showed her grit by gaining a Commercial Licence and becoming a skilled bush pilot.  In response to a casual dinner table remark - and as gesture to win back the wayward Tom - she became the first woman to fly solo east to west across the Atlantic.  Her book ‘West with the Night’ tells the story). 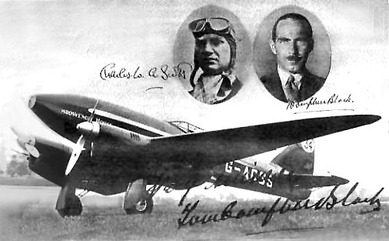 Black’s job in England was as personal pilot to Lord Furness.  He supervised the building of an airfield at Firbeck Hall, an exclusive country club which became a magnet for flying socialites, including the Prince of Wales.  (The airfield was later used by Sheffield Aero Club, was requisitioned by the RAF for the duration of the war and finally returned to agriculture in 1948).

Apart from his airborne chauffeuring duties Black’s chief interest was air racing and he was co-pilot and navigator in the Cirrus Moth which won the Manx Air Race in 1932.  In 1934 he reached the pinnacle of his fame when he partnered C W A Scott in the DH Comet which won the MacRobertson race to Australia.  The pilots were awarded the Royal Aero Club’s prestigious Britannia Trophy. 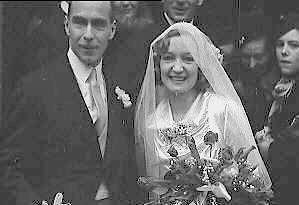 In March 1935, Tom Black married Florence Desmond and they registered a new company Campbell Black (Aviation) Ltd, for ‘all kinds of aerial transport’.  The wealthy Sheffield stock broker, Cyril Nicholson, bought the fifth and last Comet for £10,000 so that Tom could attack the record for the England-South Africa flight.  The Comet was named ‘Boomerang’, ',because ‘it will always come back’.  The name seemed, at first, to be appropriate.

With J H G McArthur as his co-pilot, Tom hoped to reach Cape Town in just 36 flying hours.  As they prepared to leave Hatfield they were delayed by a problem with the spark plugs.  They taxied out and were delayed again, twice, by other pilots taking off and landing.  They finally got away at 5.30 in the evening, heading for the first stop in Cairo.

Tom came home by sea and got on with his business.  (There is some evidence that he was involved in an operation, much frowned on by officialdom, of running deliveries to Spain during their civil war).  Soon another opportunity arose for Tom to chase the South Africa record. The Schlesinger Race offered a £10,000 prize for an air race from Portsmouth to Johannesburg. Black was one of three entrants flying Mew Gulls and he was a favourite to win.  His aeroplane was to be named 'Miss Liverpool' and on 19th September 1936 he flew to Speke for the christening ceremony. 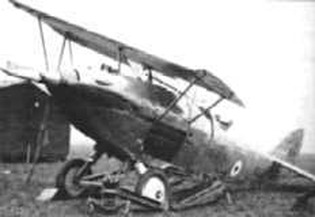 Preparing for his departure, to be preceded by a brief flying display for the crowds, he taxied out with a man on each wingtip.  Then he signalled to the men to go, presumably because he thought his way was clear.  But a Hawker Hart had just landed and was taxying back to the hangar.  Both pilots had little or no forward view.  As the horrified crowd watched the impending accident they saw Tom looking down at something in his cockpit.  The port wing of the Mew hit the undercarriage of the Hart and the machines swung together.  With what seemed to be the last turn of the Hart’s propellor the blade sliced into the cockpit of the Gull seriously injuring Tom Black.  He was dead before they got him to hospital
Tom Campbell Black had gone but it soon became evident that he had not entirely left Liverpool.  Tales of haunted airfields are legion.  Most relate to wartime activities, but Captain Black is from a different era.  Hangar 1 seemed to be his haunt and there are many stories of shadowy figures being seen – and felt – there.  A security guard felt a tight grip on his arm.  No-one was there but he showed a colleague the bruises on his arm.  Another found a door unlocked and locked it.  On his next patrol it was unlocked again.  A visiting pilot decided to sleep in his aircraft parked outside Hangar 1.  He left at first light next morning swearing never to return to Liverpool.  And of course, there’s the lift . . .

Things in Liverpool have changed now.  A new runway has been built some distance away for the John Lennon Airport and the old airport building has been converted into a hotel.  However, if you’re going to Liverpool and thinking of staying at the Marriot in Speke, it might be prudent to check what Trip Advisor has to say about it.

PS  G-AEKL was repaired and flown by Charles Gardner to win the 1937 King’s Cup air race.  It was destroyed in an air raid at Lympne on the 3rd July 1940.  Beryl Markham gave up flying and went back to breeding race horses in Kenya.  She died in 1986.  Florence married an insurance broker in 1937 and lived till 1993.