Wg. Cdr. Tony Dudgeon was stationed in Morocco and in September 1943 he had orders to fly to England.  He brought home a Lancaster that was also needed in the UK.  When he was due to return, he was offered the chance to ferry a Wellington back to North Africa - if he wished.  He was a little concerned that his Wellington experience was no more than 45 minutes day flying and also he was in ‘mediocre’ instrument flying practice.  However, with over 2,500 hours on a wide range of single and multi-engined aircraft he thought he could cope.  No one checked his experience so he kept quiet about it and accepted the offer. 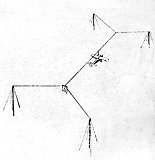 His ‘crew’ were on posting to units in North Africa - a Flying Officer navigator and a Sergeant wireless op, both of whom had about 100 hours experience. There was also a Squadron Leader (ground) engineer officer who asked could he please have a  lift.  They were to meet at Colerne to collect the Wellington, do an air test and land at Lyneham ready to leave for Ras-el-Ma in Morocco.

The air test went well.  The weather was fine and they tested everything, particularly the fuel cross-feed arrangements.  George, the automatic pilot, worked for the first hour and a half then suddenly went crazy, pulling the Wellington into a steep climbing turn.  They couldn’t get it to work for the rest of the flight.  After landing, the Wellington was refuelled, George was worked on and reported serviceable.  Take off was scheduled for 2359 that night.​
At briefing, they learned of south-westerly gales over the UK, surface winds of 40-50 knots, cloud base about 200 ft and heavy rain.  On the other hand, the weather in Morocco was good.  Fortunately, the wind was straight down Lyneham’s runway and at 2355 they leapt into the air and immediately plunged into cloud.  They climbed steadily on 235°M.  It was pitch black, the rain spurted through the gaps in the canopy and ran onto Dudgeon’s lap.  His ‘limited IF ability’ was being exercised to the full.  They reached their cruising altitude, 7000 ft, without breaking cloud and George was engaged.

After only 30 minutes the problems began.  First, George went berserk again and refused to respond to the combined efforts of pilot and engineer to fix him.  Then the navigator announced that he had forgotten to pick up any topographical maps – none at all.  Minutes later, there was a flash and all the electrics went dead – lights, electrically powered instruments, radio, radar and intercom.  In trying to find the fault, the nav and w/op dropped and broke their only torch.  The navigator retired from the scene in hysterics.

Dudgeon considered his options - in cloud somewhere over Cornwall with no capable crew support, u/s autopilot and electrics and seven hours to dawn. There was 12 to 14 hours of fuel remaining but no gauges to help in timing the changeover of tanks which could lead to air locks if he ran a tank dry.  He concluded that he had the choice of three actions.  They could bale out somewhere over England – possible injury when landing in a gale in the dark, loss of aircraft and damage/casualties caused by a fuel-filled bomber’s crash.  Alternatively, they could fly about on a number of guessed headings and wait till dawn when they might be able to find a way down through the cloud - or bale out when the fuel ran out and trust that they were still over England.  Lastly, they could head for Morocco where the weather was fine and Dudgeon would be over familiar territory.  The third alternative was appealing but it involved eight or nine hours flying over the sea with imprecise checks on fuel consumption, dodging German night fighters known to operate over Biscay and finding their way – a long way - without maps.

The third plan was chosen as the ‘least worst’.  They climbed to try to break out of cloud. At 10,000 ft they discovered there was no oxygen and at 14,000ft they were still in the murk.  They descended to the more comfortable 7,000 ft.  After two and a half hours, Dudgeon thought he would be clear of Brest (the night fighters’ lair) and he turned south, with a guessed offset to counter the cross-wind and another guess at the magnetic variation.

The next possible obstacle was the Pyrenees. Dudgeon had no idea how high they were but he knew that Mt Blanc, the highest mountain in Europe, was 15,000 and something feet and the Pyrenees must be lower.  Taking no chances, he climbed to 14,500’.  His aim was to fly on till dawn when they should be should be somewhere in the latitude of Spain.  If he could see the coast, he would follow it south – if they were over the sea, he’d fly east till he found Spain.

At around 0400 they emerged from cloud.  After four hours tiring concentration on instruments Dudgeon hoped to be able to hold his course by the stars but he found that this was surprisingly difficult so it was back to IF.  At 0530 a line of lights appeared.  Guessing that this was the north coast of Spain, he flew west following the lights and after about 15 minutes the line turned south.  The flashing lighthouse on the corner was probably Cape Finisterre.  Dudgeon turned south, with a 10° offset to the west to keep clear of Spanish airspace and he let down to 7,000ft.

At 0645, dawn brought relief from the tiring instrument flying.  The electrics remained stubbornly u/s.   The coast turned south-east and Dudgeon turned too, setting course about 20° to starboard of the coastline which he guessed would take him to Africa somewhere south of Spanish Morocco.  Africa finally came in sight and he followed the coast south till he saw a town at a river mouth which he assumed to be Rabat Sale.  Turning eastwards, he followed the road to Meknes and to their destination of Ras el Ma where he was finally on familiar territory.

They landed about 1045, just 45 minutes later than Lyneham’s flight plan.  Dudgeon felt drained.  The reaction of the ‘crew’ is not recorded but the engineer officer thought the trip ‘very interesting’.