The flight had been attempted before and although it wasn’t a complete success, it’s a story worth telling.  By 1925 there were regular flights between the Hawaiian Islands and both the US Army and Navy had established bases.  But all aeroplanes had been shipped in.  The Navy decided to bridge the gap.  On 31 August 1925 two PN-9s took off from San Francisco heading for Hawaii. At 200 mile intervals along the route from the mainland they stationed a ship for refuel or rescue duty.
After 300 miles one of the boats developed mechanical trouble and was forced down to alight on the sea.  The boat commanded by Cdr. John Rodgers flew on.  His boat's fuel consumption was higher than expected and with just 350 miles still to go to Oahu, this PN-9 was also down on the rough ocean.  With their wind-powered radio, the crew could hear the messages of the ships searching for them but, without engine power, the transmitter was dead and they couldn’t reply.  Rodgers decided to take advantage of the NE trade wind.  The crew stripped the fabric off the lower wings and rigged it as a sail.  Fitting a jury rudder they made slow progress towards the island.

What little food they had was gone in three days and all fresh water was gone in six.  A convenient rainstorm topped up the drinking water and after nine days sailing the island of Kauai was in sight.  Then the Navy found them.  A submarine on routine patrol came across the flying boat and towed it to a convenient harbour.
The crew were taken by ship to Pearl Harbor for a heroes’ welcome.  The PN-9 was repaired and returned to service.  Cmdr Rodgers was promoted and became Chief of the Bureau of Aeronautics in Washington.  Sadly he had hardly become established in the job before he was killed in an air crash in 1926.  However, his name lived on when Honolulu’s first airport was named after him.
​
The Navy made no further attempts to fly to Hawaii but the Dole Prize produced a reaction in the US Army Air Corps.  They had already set up radio beacons in San Francisco and Maui and developed over-water navigation techniques.  They hastily prepared a Fokker C-2 for the flight.  On 28 June, 1927, pilot Lt. Lester Maitland and navigator Lt. Albert Hegenberger, both of whom had previously served in Hawaii, took off from Oakland.  Despite a series of problems with their compass, radio and an intermittently faulty engine, they arrived safely over the island of Kauai.
​Circling until daybreak, they flew to Oahu and landed at Wheeler Field to a welcoming gun salute.  Their 25 hr 45 min flight went down in history and both were awarded the DFC.  Dole, however, offered no reward.  His prize had specified landing at Honolulu. 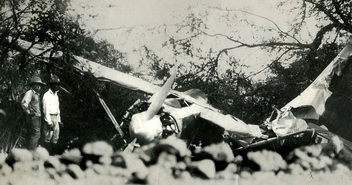 
​There was another flight reach the islands which was also disqualified for the same reason.  Ernie Smith and Emory Bronte left Oakland in a single-engined Travel Air 5000 on 14 July.  They reached Hawaii and ran out of fuel crashing into a tree on the island of Molokai.
​Dole scheduled the start date as 16 August and fifteen eager competitors registered for the race.  Tragedy struck early.  Two Navy Lieutenants took off from San Diego for the Oakland starting point.  Just 15 minutes after take-off they flew into fog, crashed into a cliff and both died.  A British pilot, Capt. Arthur Rogers, was testing his Bryant monoplane.  Approaching to land, the plane suddenly dived steeply towards the ground.  Rogers jumped out before the crash and, watched by his wife and baby daughter, fell to his death.  The Pride of Los Angeles, an International CF-10 twin engined triplane, crashed into San Francisco Bay.  Fortunately, the crew were unhurt. 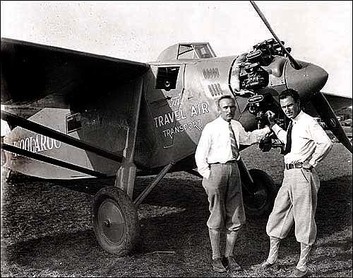 ​Others who did reach the start had their own adventures.  Arthur Goebel, a Hollywood stunt pilot, had entered his Travel Air 5000.  Sponsored by Phillips Petroleum it was named Woolaroc, (the name of Phillips’ ranch retreat derived from the woods, lakes and rocks of  Oklahoma).  In one of his test flights, Goebel saw a problem with his undercarriage that could have caused a crash on landing.  He forced open the door and hung out of the cockpit in the slipstream and successfully fixed the fault.

The Buhl Air Sedan CA-5, Miss Doran, attracted a lot of attention, possibly because of its crew – and maybe their dress sense.  Although 22 year old Mildred Doran was a recently qualified pilot she was to fly as a passenger.  The pilot, Augie Pedlar, won his place on the toss of a coin and the navigator, Vilas ‘Cy’ Knope, was a replacement for the original choice who had managed to get lost over Oakland.  On the way to the race venue, they had been forced down in a field because of engine trouble.  They had no tools to fix it.  As Mildred explained, ‘We threw them off at Long Beach because they were in the way and cluttering things up.’
​
It wasn’t the only casual attitude encountered by the new Aeronautical Branch of the Dept. of Commerce.  No entrant had one of the Pilot or Navigator Licences that had been introduced a few months previously, causing a flurry of hurriedly taken exams, test flights and issue of provisional licences. 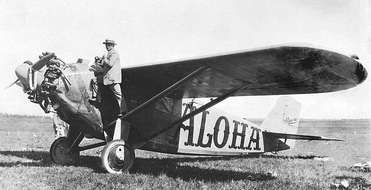 ​The only Hawaiian entrant was Martin Jensen.  He had scrambled together enough money to buy a dis-assembled Breese-Wilde 5 Monoplane, which he named Aloha.  He spent 10 days re-building his plane and hastily recruited Paul Schluter, a ship’s navigator who had never flown before.  They rigged up a line and pulleys to pass messages to each other.  An inspector checked the fuel capacity, 150 gallons, and said it wasn’t enough.  ‘We’ll carry another 250 gallons here in the cabin’, said Jensen, ’in 5 gallon cans, top up the fuselage tank and throw the empties overboard’.  ‘But Schluter could hit the tail surfaces – and he’s a chain smoker’.  ‘There’s no other way’ said Jensen – and he passed the inspection.
All planes were checked to see that they carried life rafts and emergency rations and that their earth inductor compasses had been properly set up.  Only four had radios and two of those were receivers only.  A plea was made for the start to be delayed by two weeks but the organising committee in Hawaii refused this.
​Before the news of Oklahoma’s landing filtered through the second hopeful lined up for take-off.  El Encanto, a Goddard Special, was widely expected to do well.  It didn’t even get airborne, swerving into the rough ground alongside the runway.  Next came the Pabco Flyer, a Breese-Wilde 5, sister-ship of Jensen’s Aloha .  It climbed away, past the wreck of the El Encanto, then sank to earth some 7000 ft. from the runway.
Three down, and thankfully, no one hurt.  The rest of the field seemed to leave in good order.  Golden Eagle, the prototype Lockheed Vega 1 (Jack Frost and Gordon Scott) left the ground smoothly, followed by Miss Doran and then Dallas Spirit, a Swallow Monoplane,  (William Erwin and Alvin Eichwaldt
Interrupting the take-offs, the Buhl Air Sedan Miss Doran spluttered back into the circuit and landed.  The crew jumped out to work on their engine.  Dallas Spirit also landed but the fabric ripping off the Swallow’s fuselage meant that it was out of the race.  Aloha and Woolaroc departed smoothly, followed by Miss Doran again with a healthier sounding engine.  Remarkably, Pabco Flyer came back to the starting point for a second try.  It crashed again.
​
At the end of the day’s excitement, four competitors were navigating their way over the ocean towards Hawaii and four had crashed or withdrawn from the race. 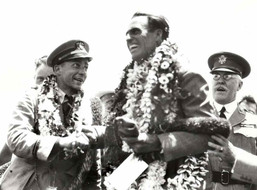 ​​Art Goebel in Woolaroc flew a great-circle route with Bill Davis navigating by sextant and smoke bombs to check drift.  Reaching Oahu they were met by a Boeing PW-9and escorted to a landing in Honolulu and a tumultuous welcome.  They won the race in 26 hours, 17 minutes, earning the $25,000 first prize.

Close behind, taking 28 hours, 16 minutes, came Jensen and Schluter in Aloha.  The $10,000 prize for coming second should have solved Jenson’s financial problems.  Maybe not.  He handed over to Schluter just $25.
The race followers in Hawaii waited for the next arrivals but none came.  They were clearly down in the Pacific.  The Navy launched a less than hopeful search, involving three submarines.  They were looking for Augie Pedlar, Cy Knope and Mildred Doran (Miss Doran), Jack Frost and Gordon Scott (Golden Eagle).

Back in Oakland, Dallas Spirit had been repaired and set off three days later for Hawaii.  It was to be the second leg in an attempt to win a $25,000 prize for a flight from Dallas to Hong Kong.  Bill Irwin and Alvin Eichwaldt  said they would search for the missing fliers on the way.  They too joined the missing and disappeared.

So ended the Dole Race.  It was conceived to generate publicity.  In that, it certainly succeeded but not in the way Dole intended.  Only two aeroplanes completed the course and all attention was focused on the 10 people who had died in the attempt. 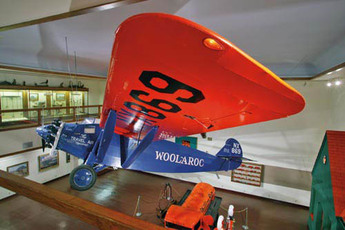 ​​Oddly enough, the Woolaroc lived on.  It was shipped back to Phillips’ Oklahoma ranch and a shelter built for it.  Over the years, the shelter was expanded to house a collection of Colt guns.  Now it hangs in the corner of a large museum of Western artefacts where most visitors (who know well enough of Lindbergh’s achievement) stumble across the Dole Prize for the first time.