Gardening might not be your favourite activity but it has its compensations when an interesting sound takes priority over weed-killing.  The other Sunday, Biggleswade’s skies were enriched by a floatplane – no, it had nosewheels on the floats so it was an amphibian, no less.

It was low enough for its appropriate registration to be visible, G-WATR.  That’s Neil Gregory’s Husky, designed by Christen Industries and produced in Colorado by Aviat.Its powerful 180 hp engine gives it a good performance and it’s used for US border patrol and elephant tracking in Kenya.  Neil offers seaplane training at his base at Lochearnhead in Scotland. 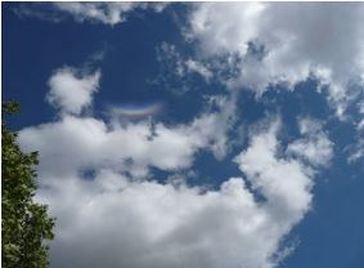 Just a couple of weeks later the afternoon sky was largely covered by broken cumulus.  In a blue gap appeared a small section of a rainbow.  There had been some showers about so a rainbow would not be unusual. But there was something odd about this one.

Rainbows normally appear down-sun, produced by the refraction of the sun’s rays on rain drops being reflected and appearing at an angle of about 22º above the horizon, sometimes with a secondary ring at 46º.  This little arc didn’t follow those rules because it was towards the west ie visible when facing the evening sun.

So maybe it was part of a halo round the sun.  Ice crystals between the observer and the sun can produce halos.  These too are at 22º and 46º.  It’s not the best of photographs but it’s clear enough to see that the arc can’t be a halo – it’s upside down.

Digging into the excellent website of the Cloud Appreciation Society led to the answer.

​Halos are produced by ice-crystals which are at their best in temperatures of -20º C. When hexagonal crystals are rod-shaped with the longitudinal axis aligned horizontally they can produce another arc as a tangent to the halo.  If you want its technical name it’s a circumzenithal arc.

It’s more popularly known as the ‘smile in the sky’.  And to add to the pleasure of this accidental discovery, the invisible ice crystals are known as ‘diamond dust’.
The first picture, taken by Jay Brazel of Colorado, clearly shows the phenomenon uncluttered by clouds. The other photographs are by Paul Warren and Thomas Dossler (Austria). All are from http://cloudappreciationsociety.org/