In 1940 Britain was ill-prepared for the threat of imminent invasion.  The Home Guard platoons impatiently waiting for their rifles to be issued armed themselves with knives tied to broom handles.  The situation in the RAF had its parallels.  There were insufficient aeroplanes to patrol the coastline so reserves had to be drafted in – even Tiger Moths were prepared to go to war.

A passing U-boat might be scared off by just the presence of a patrolling Tiger but a bit of aggression would be more effective.  Back in 1933, a Tiger Moth had been fitted with bomb racks and a .303 machine gun in the front cockpit. There were hopes of foreign sales but they failed to materialise.  In 1940, 1500 kits were prepared to be fitted to Tigers allowing them to carry up to eight 20lb practice bombs, either under the rear cockpit or, preferably under the wings. A simple Bowden cable release was used by the pilot who flew from the front seat. The bombs were to be stored at ‘advanced landing grounds’ near the coast to put the Tigers close to the action.  It was also a convenient place from which to launch an attack on any invading troops.  Ground engineers at No. 1 Elementary Flying Training School volunteered to service the Tigers and load the bombs.  They kept a ‘small kit’ at home and a service kit in a special hangar at Hatfield and were ready for immediate action when a caller at the door  used the operation’s name – ‘Banquet Lights’.

Thorough testing was carried out.  Major Hereward de Havilland joined in the bomb dropping tests.  In the process the handling of the Tiger with extra weight on the wings was explored.  It was found that it was rather more reluctant to recover from a spin.  This has generated a myth which persists to this day.  It was some time later, in 1942, that concern was raised about the number of Tiger Moth spinning accidents.  The solution was to add small strakes on the top of the fuselage forward of the tailplane.  Today’s Tiger pilots argue that they are not necessary and, incorrectly, blame the bomb racks.  There are plenty of Tigers happily flying with and without strakes.  It simply gives a clue as to the vintage of the aeroplane.  For example, at Henlow there is a Queen Bee – it looks just like a Tiger but was modified back in the 30s to be a radio-controlled target drone.  It was never fitted with strakes.

Why the under-wing racks were preferred

Which one is the Queen Bee? 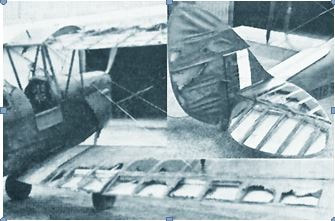 Back to the desperate measures of 1940.  If bomb dropping was being planned, what other useful deposits could be applied to the enemy. A test was carried out to replace the bombs with powder dispensers carrying Paris Green, an extremely poisonous insecticide. The fertile think tank which produced this idea went further.

Invasion was expected to come by sea but the Germans had demonstrated their expertise in using paratroops.  So to cover all options the redoubtable Tiger was fitted with a 10 foot long steel tube, hinged to trail below the tail skid.  On the business end of the tube was attached a small hand-scythe (shades of the Home Guard).  The Tiger was meant to join, and keep up with, the stream of Junkers 52s, waiting for the paratroops to emerge. With impeccable timing the brave pilot would dart in and use his Paraslasher to hasten the descent of the enemy.

Commonsense eventually prevailed and the insecticide and scythe ideas were abandoned.  To everyone’s relief, there was no invasion, although there is on record a student pilot who recalls being rounded up with his kit to stand by as a bomber pilot during a scare in September 1940.

But the Tiger bomber did have its day – and that was in the Far East.  When the Japanese army occupied Malaya in February 1942 and prepared to attack Singapore every resource was called to the defence, including the small Flying Training School.  Their single Avro Cadet and two Tiger Moths were used for reconnaissance, message dropping and searches.  Either some of the bomb racks kits found their way to the Far East or they made their own.  Whatever, Flt Lt Dane and Sgt Nathan’s Tiger Moths dropped 20 lb bombs on the invaders right up to the night before the RAF's evacuation to Sumatra.

There is one other Tiger tale you’ll enjoy.  He might possibly have heard of the ideas to make Tigers more aggressive but something inspired Flt Lt Bernard Barton, an instructor based at Fairoaks.  Cruising above a level of low clouds he noticed that the barrage balloons protecting nearby Brooklands were also sticking their heads into clear air.  Confident that he wouldn’t be observed from the ground he flew towards a balloon intending to bounce his wheels off its upper surface.  All went well as he lined up and perfected his approach on the unsuspecting silver sausage.  But after rolling wheels comes ripping tail skid and this tore through the fabric.  It might have been the hot exhaust gasses which ignited the hydrogen.  Workers at the factory below were intrigued to see one of their balloons coming down out of the clouds in flames.  Meanwhile, Barton was limping back to Fairoaks with his eyebrows singed and with much of the fabric burnt off the right hand side of the Tiger’s fuselage.  The interview with his CO must have been memorable.​

Many Tigers still grace our skies and you should know that you can seize an opportunity to pay your own tribute to its warlike pretensions.  In May this year it’s the 70th anniversary of the Dambusters’ raid.  Contact Blue Eye Aviation at Netherthorpe and don your re-enactor’s flying helmet and jacket.  For a considerable consideration they will take you on a 1-hour flight which includes a simulated attack on the Derwent Reservoir dam – as used by 617 for practice.  It won’t be at night and there won’t be any fireworks but you won’t be able to resist adopting the appropriate steely-eyed, gritted teeth expression as you skim over the water in a genuine and much-loved warbird.