A Sideways Look at the Battle of Britain
​

The RAF opened its score during the first serious air attack on the UK mainland on 16 October 1939.  A Heinkel 111 on early morning reconnaissance spotted a battleship, incorrectly identified as HMS Hood, entering the Firth of Forth.   From their base in Sylt KG30 sent 15 Ju 88s but by the time they arrived, their target had docked in Rosyth.  Curiously, their orders were not to attack ships in dock so they concentrated on two cruisers and a destroyer in the Forth.  Attacked by Spitfires, two Ju 88s were shot down into the sea.
​
Fighter Command’s 13 Group, which stretched from Yorkshire to Shetland, defended the shipping lanes by convoy patrols and response to radar warnings.  German reconnaissance aircraft which met a watery end included He 111s, Ju 88s, He115 floatplanes and a Fw 200 Condor. The first tangible evidence of RAF fighters’ success arrived on 3 February 1940. 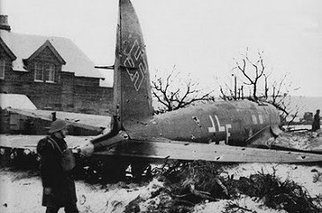 Alerted by radar of the approach of a formation of raiders, 43 Squadron, based at Acklington in Northumberland, sent a section from B Flight to intercept.  Led by Flt Lt Peter Townsend (he of post-war involvement with Princess Margaret) the Hurricanes found and attacked a Heinkel 111.  Badly shot up, the Heinkel scraped over the cliffs near Whitby and crash landed near a farm.  The surviving pilot and radio operator were released from the wreck and unceremoniously locked in the farm’s coalhouse until the police arrived.  This was the first enemy aircraft to arrive on British territory.  Other Hurricanes of 43 Squadron shot down two He 111s into the sea.

​Six days later, a He 111 crash landed east of Edinburgh.  It was repaired, given the RAF serial number AW 177 and flown by No 1426 (Enemy Aircraft) Flight.  ​​
Later in the month another He 111, forced down by a Sqn Ldr Farquahar, landed in a rather remote area.  Anxious to prevent the Germans from destroying their aircraft, Farquahar decided to land alongside. He approached too fast, overshot and ran down the hill into a bog where his Spitfire overturned.

The Germans pulled out their injured rear gunner and set fire to the bomber.  Then they ran down the hill to rescue the inverted Farquahar, after which everyone rushed back up the hill to pull the injured gunner further away from the fiercely burning Heinkel.  At this point, over the hill came the local LDV (predecessor of the Home Guard).  Seeing the muddy group of airman around the burning bomber they promptly arrested the lot.  It took some time and an OHMS letter bearing demand for the payment of Income Tax to convince them of the Squadron Leader’s identity.  The incident reached the notice of Parliament which mentioned one of the Heinkel’s crew, Fw Sprigarth, for his part in the rescue.​

Throughout the early months of 1940 day and night bombing raids against coastal towns and airfields intensified.  Although the attacks were not concentrated it was not unusual for over 100 enemy aircraft to be plotted crossing the coast during the night raids.  Merchant ships were suffering greater losses from bombs and mines.  But sometimes they fought back.

The Highlander, a small 1000 ton cargo vessel, was bombed by a Heinkel 115 floatplane.  The bombs missed but the Germans returned to attack with machine guns. The ship’s Lewis gunners replied effectively and the Heinkel crashed into the sea in flames.  The crew’s celebrations were interrupted by a second floatplane which  repeated the attack.  Again the bombs missed.  The Heinkel made repeated strafing passes but it too was damaged by the ship's machine guns.  It lost height, its wing tip hit one of the ship’s lifeboats and it crashed onto the poop deck, bursting into flames.

The Highlander steamed triumphantly into harbour with the evidence of its success draped over the stern, the first merchantman to shoot down a plane with its machine guns.  The crew feared repercussions and they renamed their ship.  It made no difference.  Later they were torpedoed and the ship sank with all hands.

After the German advance and occupation of Holland, Belgium and France  in May/June 1940 they turned their attention to south east England, now within easy reach of the fighter escort for the bomber force.  Air activity in the north did not diminish but was overshadowed by the events elsewhere.  The build-up of German forces in the Channel ports and airfields clearly indicated that an invasion was imminent.

Intelligence reports indicated that there was an unusual build up of bomber strength on the airfield at Aalborg West, in Denmark – as many as fifty Junkers 88s plus Junkers 52 troop carriers.  On 13 August 82 Squadron were briefed to attack the airfield.  Twelve Blenheims, each carrying four 250lb HE bombs and eight 25lb splinter bombs took off on the raid.  At the limit of their operational range, they were unescorted by fighters. On the way to the target, one Blenheim had to turn back.  The others had the misfortune to meet the nine Me109s at Aalborg not mentioned in the intelligence reports and all eleven Blenheims were shot down.

‘Eagle Day’ was on 15 August the Germans planned a major assault to saturate the British defences.  It included a large force from Luftflotte 5 based in Norway and Denmark to attack the north east of England.  Their understanding of RAF fighter strength, depleted by the Luftwaffe pilots’ claims, led them to believe this area would be virtually undefended. 65 Heinkel 111s, escorted by 34 Me 110s approached from Norway, targeting Usworth, near Sunderland and the RAF’s bomber airfields in Yorkshire.  The 50 Ju 88s from Aalborg were to attack RAF Driffield.

The first radar plots reported 20 plus hostile 90 miles east of the Firth of Forth.  This became 30 in three sections approaching Tynemouth.  With so much warning, 72 Squadron’s Spitfires were perfectly positioned off the Farne Islands.  Flt Lt Edward Graham, leading 11 Spitfires, was shocked to meet not 30, but a swarm of 99 German aircraft.  Graham hestitated whilst he evaluated the best direction of attack. One of his pilots asked whether he had seen the Germans.  With his usual slight stutter he said, "Of course I've seen the b-b-b-bastards, I'm trying to w-w-w-work out what to do," a remark which became famous in Fighter Command.

One section of Spitfires attacked the fighters, the rest the bombers.  The Heinkels split up, some jettisoning their bombs and heading for Norway.  Some of the Me 110s were fitted with long-range tanks and had left their gunners at home.  They dropped their tanks and formed defensive circles. As the fight moved south 607 and 41 Squadrons joined in.  The bombers scattered their loads on several towns and the airfields went unscathed.  Although more were claimed, the Germans lost eight bombers and seven fighters destroyed.  Eight more were damaged sufficiently to be written off after crash landing.

The Aalborg Ju 88s of KG30 were unescorted.  They, too, were intercepted before they reached the coast.  616 Squadron’s Spitfires and 73 Squadron’s Hurricanes caused a section of the enemy to break off.  They bombed Bridlington on their way home.  The remaining Ju 88s were more determined and attacked Driffield causing heavy damage and destroying 12 Whitleys.  Five 88s were shot down by fighters, one by AA fire.
​
These attacks marked a turning point in the Battle of Britain.  The unsustainable loss rates of 23% of the Norway-based group and 12% of KG30 showed that air superiority was essential for daylight bombing to succeed and that the Me110 could not be relied on as an escort fighter. The involvement in the Battle of Britain of the north east of England lasted less than two hours, from the alert at 12.47 to the all clear at 14.10 but it had a significance which out-weighed its brevity.