We’ve just past the 75th anniversary of a significant flight.  It is notable for its daring and successful execution.
It appears in this Newsletter on the thin excuse that it was witnessed by a young boy who was a future AEG member.
​ 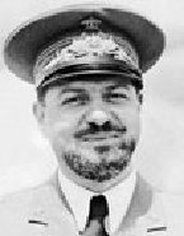 Italo Balbo fought WWI in Italy’s war against the Germans, ending as a 22 year old Captain with two medals for bravery.  He completed his studies, gaining a law degree.  In 1921 he joined the new National Fascist party, becoming secretary of his local group.

Soon he was organizing his own gang of Blackshirts, leading them in violent street-fighting attacks on communists and strike breaking for local landowners.  His growing reputation earned rapid promotion in the party.   He became the youngest of Mussolini’s inner circle of four who planned the march on Rome which brought Italy under Fascist rule in 1922.

​In 1926 he was rewarded with the appointment of Secretary of State for Air despite his total lack of knowledge of aviation.  He organized his ministry to keep bureaucracy to a minimum.  No-one had a personal desk and meetings were held with everyone standing to discourage time-wasting.  Balbo took a pilot training course and set about showing Italian aviation to the world.

In a time when flying events captured news headlines, Italy was an active participator in the Schneider Trophy seaplane races, an Italian completed a record flight to Australia, Japan and back to Italy and Umberto Nobile took the airship Italia on a much-publicised polar expedition.

By 1930 Balbo was Minister for the Air Force and an active pilot with the rank of General.  He personally led a flight of 12 Savoia-Marchetti SM55 seaplanes on a return flight across the South Atlantic to Rio de Janeiro, Brazil.


In 1933, he saw the opportunity for another long-range demonstration of Italy’s aviation prowess.  An international exhibition was planned in Chicago to celebrate the ‘Century of Progress’.  Balbo decided to attend in force.  He assembled 25 of his SM55s and plotted a route to Chicago via Amsterdam, Londonderry, Reykjavik, Labrador and Montreal.  At this stage of aircraft development, the North Atlantic and its unpredictable weather were still formidable obstacles so the intention of the Italians to tackle the difficult East to West crossing against the prevailing winds with no fewer than 25 aeroplanes was widely expected to be a catastrophe.
The SM55 was originally designed as a torpedo bomber but made its name by winning no fewer than 14 world records in its class for speed, altitude, load and distance.  Of wooden construction it was surprisingly rugged with twin hulls for stability, twin 800hp engines and two fins and three rudders carried on wire-braced booms.  The pilots sat in a cockpit in the wing centre-section.
​On 30 June, the formation reached Amsterdam successfully but a minor incident in the harbour damaged one seaplane and it was unable to continue.  The rest left next morning to fly up the east coast of England before turning west for Northern Ireland.  The route and scheduled times were printed on the front page of many newspapers.  It was a Saturday and all who could headed for the coast with picnics packed and binoculars at the ready awaiting the privilege of seeing these intrepid aviators.

The fine day was marred only slightly by haze and the crowds first became aware of the approaching formation by the snarl of their engines.  Then they appeared out of the haze, a swarm of 24 white flying boats cruising slowly past in loose formation at low level. They were ungainly aircraft with their twin hulls and semi-detached tails. Nevertheless, their sheer number made an impressive spectacle and all the spectators felt that their wait had been well rewarded.
They flew in easy stages, taking 15 days in all.  Their final arrival on Lake Michigan was greeted by a huge crowd of over a million.

Balbo was feted as a hero.  President Franklin Roosevelt gave him lunch and a DFC. Chicago renamed a street ‘Balbo Drive’.  The Sioux nation adopted him as Chief Flying Eagle.  In Madison Square Gardens he told a crowd of cheering Italian-Americans  "Be proud you are Italians. Mussolini has ended the era of humiliations."

A new word was introduced into the English language - a large formation of aeroplanes becoming referred to as a ‘balbo'.

The return flight to Italy took a more direct route via the Azores.  One of the flying boats was forced to alight on the open sea and demonstrated its ruggedness by surviving a 200 mile tow to the Azores.  None of this diminished the triumph of Balbo’s return to a hero’s welcome. He was immediately promoted to Marshal of the Air Force.

But the outcome was not all rosy.  His rising popularity was such that it was more than Mussolini could stomach.  Just three months after the homecoming Balbo was ‘promoted’ to Libya as Governor-General.  Swallowing his pride, he determined to transform Libya from a backward colony to a model Italian province. An ambitious building programme included a road called the Via Balbia.
​
He was unhappy about the increasing links with Germany.  After Hitler’s invasion of Poland in 1939, he flew to Rome to argue that Italy should side with Britain and France.  His was a lone voice and Italy entered the war on 10 June. 1940.

​On 28 June, Balbo was flying an SM 79 (a bomber but with a civil registration) and returning to Tobruk airfield.  Earlier that day RAF Blenheims had attacked Tobruk and the defences were alerted.  The cruiser San Giorgio was in the harbour and opened fire on the SM 79.  The airfield guns joined in and the bomber crashed, killing all on board.  Officially, it was recorded as a ‘friendly-fire’ incident but there was a strong counter-belief which implied ‘assassination’.
His end was ignominious but Balbo lives on.  There aren’t many balbos in the sky these days but you can see one regularly as a feature of a Duxford display. They collect as many as thirty Spitfires, add a few Hurricanes and their gaggle of American fighters and even an Me 109 or two.  Wonderful sight – thrilling noise.
​
Back in Chicago, Balbo Drive is still there though there is the occasional protest at ‘honouring a Fascist thug’.  And tucked away in a Chicago park is Mussolini’s contribution.  He sent a 2nd century column from Ostia Antica and it was erected on a plinth in 1934. The fading inscription in both Italian and English reads:

FASCIST ITALY BY COMMAND OF BENITO MUSSOLINI
PRESENTS TO CHICAGO
EXALTATION SYMBOL MEMORIAL
OF THE ATLANTIC SQUADRON LED BY BALBO
THAT WITH ROMAN DARING FLEW ACROSS THE OCEAN
IN THE ELEVENTH YEAR
OF THE FASCIST ERA
Oh – and finally – If you go to the right kind of barber to get your beard trimmed he’ll know what you want if you ask for a balbo.