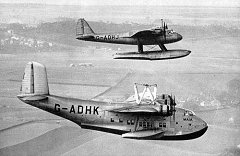 In the 1930s aircraft were growing heavier, needing larger airfields for operation.  There was more than a passing interest in developing some method of helping a heavily loaded aeroplane through the take-off phase.  Short Brothers provided a solution which would get a mailplane airborne with sufficient fuel to cross the Atlantic, the Short-Mayo Composite.  It worked – and Mercury (the floatplane) made the first commercial Atlantic crossing to Canada in 1938.  Later it established the world long-distance record for floatplanes of 6032 miles with a flight from Dundee to South Africa.  But it was a cumbersome operation, needing a large crane to lift Mercury and the war killed any further development
A strong advocate of the ‘auxiliary’ aeroplane to help take-off was Noel Pemberton-Billing.  He was a pioneer aviator who had gained his licence in 1910.  In 1913 he started his own business in Southampton to build high performance flying boats, which he called supermarines.  The factory also produced a number of unsuccessful aeroplanes, including a twin-engined quadriplane night fighter.  In 1916, Pemberton-Billing sold his share of Supermarine and became an MP where he campaigned vigorously for the cause of aviation.  By the 1920s he was making his living as a writer and inventor.  He designed several aeroplanes, some with unusual features, and, just before the outbreak of WWII, even an unmanned flying bomb, but nothing from this flood of ideas resulted in any production. 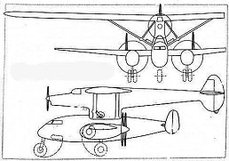 He proposed several methods of solving the heavily-loaded take-off problem and finally decided to put into hardware a configuration slightly different from that chosen by Shorts.  His P.B.37 was design as a dive-bomber which had a single engine buried in the fuselage driving twin pusher props. For take-off, a lighter aeroplane would be attached above the bomber to increase wing area and power.

In 1940, he contracted F. Hills and Sons (Hillson) to build two smaller proof-of concept prototypes in their Manchester factory. The photographs show the remarkably quick progress of this work but P-B soon ran out of money before construction was completed and neither aeroplane flew.
Pemberton-Billing published his ideas on the helping hand in a book called ‘Defence against the Night Bomber’.  He was concerned that a night fighter should have sufficient endurance for what could be a long patrol and chase and yet still be able to operate with its normal high performance for combat.  He proposed not only the auxiliary aeroplane but also’ slip’ or ‘scrap’ wings which could be jettisoned - and even bombers towing fighters which, when needed, would start their engines and release the tow.

However, the slip-wing concept still had some life.  Hillson were asked to fit an upper wing on a Hurricane IIB.  Designated the Hillson FH 40 it flew quite well, if rather slowly, as a biplane in May 1943, although the upper wing was never released.  Early in 1944 this unusual modification to the Hurricane was scrapped.
The ‘take-off as one, then fly as two’ launching method has not gone away.  The German Mistel project in which a fighter carried an unmanned ‘flying bomb’ had several varieties but achieved little operational success.  Post-WWII there were tests with a B-36 carrying its own defensive jet-fighter.  And today, those with the wherewithal have booked their seats for a flight into space after a launch carried by the latest helping hand.