The Airbus 380s of Qantas are being named after notable Australian aviators and inventors. So you’d expect one of them to commemorate the individual who carried out the first successful flight in Oz. Read on . . .
​

Who was the first to fly down under?  This is probably a question that has never troubled you before but you are hereby invited to form your own opinion - there are several claimants.

​One of the first to try was an Englishman, Colin Defries.  He took his Wright Model A to a ‘Flying Fortnight’ on Victoria Park race course, Sydney. The weather conditions were not satisfactory for the delicate flying machines of the time.  Defries’s biplane was towed by a car, then taxied about the field, suffering some damage from a collision with a piece of timber lying in the grass.  After repairs, his attempt to fly was frustrated by a rudder cable tangling with a propeller.  More repair work needed. 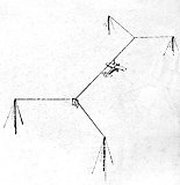 ​
​Finally, early on the morning of the very last day of the Fortnight, 9 December, 1909, after the frustrated crowds had largely left for home, Defries assembled his biplane and opened the throttle for take-off.  In the slipstream he lost control of his hat, grabbed it and crashed.  He was reported to have flown 115 yards although the only journalist who was there decided the distance was 300 yards.  A second attempt on 18 December failed to get off the ground.  After repairs his mechanic, R C Banks, took the controls on 1 March 1910 and he, too, crashed.  Defries gained little acclaim for his ‘flight’.  It came to be regarded by some as no more than a hop in which he failed to demonstrate any ability to control his craft.

​On 13 March, 1910, Bill Wittber, who had no previous flying experience, tried in a Bleriot XI and claimed that there was daylight below his wheels for 40 yards.  It was described in the press as an ‘unexpected flutter’.  The Bleriot emerged again on 18 March when Fred Custance (also with nil experience) took it out one morning and apparently completed a 5 minute flight in which he ‘flew 3 miles’ - but there were few witnesses (not surprising at 5.0 am).  What is fact is that the day ended with a damaged Bleriot and a slightly injured Fred (pictured left). In later years, the Bleriot’s owner admitted that Fred didn’t really get off the ground. 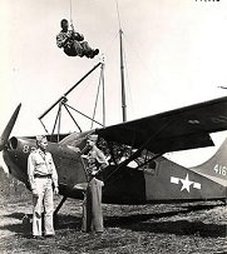 Meanwhile, Harry Houdini, the famous magician and escapologist arrived in Australia.  The year before, in Europe, he bought a Voisin biplane and made sure that his name was boldly painted on the side panels and tail.  After the obligatory crash, he made his first successful flight in Hamburg on 26 November 1909. To publicize his Australian tour he brought along the Voisin and his full-time mechanic.

At Diggers Rest, Victoria,  on 18 March, 1910, Houdini successfully completed a circuit of Plumpton’s Paddock. He flew twice more that day and again on 20 and 21 March.  He was later awarded a shield by the Air League of Australia for ‘the first aerial flight’ with the date, curiously, quoted as 16 March, maybe to ward off any claim by the afore-mentioned Fred.​ Confronted by a reporter’s standard question ‘What were your feelings?’ he replied:  “They were absolutely novel and I can scarcely describe them.  But I felt a sensation of wonderful lightness and being independent of space and time. You know the untrammelled experience of flight in a dream? It was like that.  There was no resistance against it.  The morning air sweet and fresh, felt like some life giving elixir or cordial, as it whistled and shrieked in my ears.

“Behind me the propeller churned away making a terrible din as if protesting against my temerity. I shouted with joy but the spectators away beneath couldn't hear me.  Then out of the corner of my eye I noticed my engineer capering about and dancing on his hat, while certain semaphore signals prearranged told me it was time to return to earth."
How did you make your descent?

"I simply depressed the plane, shut off the engine and glided to the ground as smoothly as a water hen glides to a pool.  It was as if the machine desired to impress me that all was perfect ease.

“I know of no locomotion in which master and machine appear to have, may I use the word, affinity?  There is the mind of the man, composed and serene after the first exhilarating effect of rising, directing the flight and the immediate response of the mechanical bird.  I could even go to the length of saying that it was like a thing of life entering into one's desire to ride the air."

On his return to Europe, Houdini put the Voisin into storage in England apparently intending to fly between the cities on his next Music Hall tour.  This didn’t happen and Houdini never flew again.  However, he was remembered on the centenary of his flight with an air show at Diggers Rest, magic acts and a display of a one third scale model of his Voisin.

So name of the first to fly surely deserves to be proudly borne on the nose of an Airbus 380?  It will take its place alongside the names of people like Charles Kingsford Smith (first trans-Pacific flight from USA to Australia), Bert Hinckler (first solo flight from UK to Oz) and Hudson Fysh (founder of Qantas).  And the first to fly?  Well, you’ll not find Colin Defries or Bill Wittber and certainly not Fred Custance.  Does Harry Houdini’s name grace an elegant Airbus nose?  Er. . no.

If you conveniently define the first flight by requiring the aeroplane to be designed and built in Australia you’ll come across John Duigan, a true son of the Oz soil, who took to the air on 16 July 1910 from the family paddock at Mia Mia in Victoria.  So, naturally, it is John Duigan who qualifies to be commemorated by Qantas. And here he is. 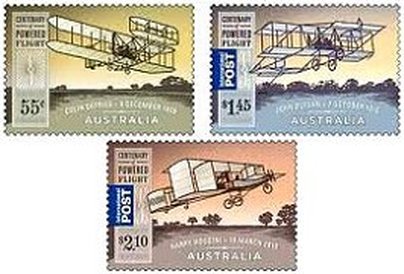 ​Earlier this year, the Australian Post Office produced a commemoration issue of stamps.  They didn’t need to make a choice of who was first.  They had sufficient stamps in their range to celebrate all three claimants.