The Museum of Army Flying at Middle Wallop holds many interesting exhibits.  One of the more unusual is this, the ML Aviation Utility Aircraft.  It’s shown without its wing which would be attached to the padded beam above the fuselage.  And to be clear, it sits on a nose wheel undercarriage so it flew to the right in the picture. 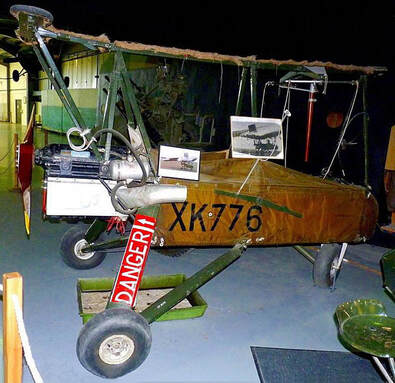 It was produced in great secrecy in the late 1950s as one of the world’s first stealth aircraft.  Its large wing was made of radar reflecting rubberised fabric which held its shape by being inflated to a positive pressure of under 1lb/sq. in. Radar absorbing panels were fitted alongside the fuselage to screen the engine.  It was intended to be used for battlefield reconnaissance and sneaky insertion and retrieval of agents.  The whole package was to be easily transportable and capable of being flown by ‘lightly trained’ army pilots.

The job of producing and proving this Cold War winning weapon was given to M L Aviation which had previously produced aviation components. (The M was Eric Mobbs, M.D. and the L was Marcel Lobelle, the Belgian-born designer once employed by Fairey.  (He designed the Swordfish, Battle, Fulmar and Barracuda). 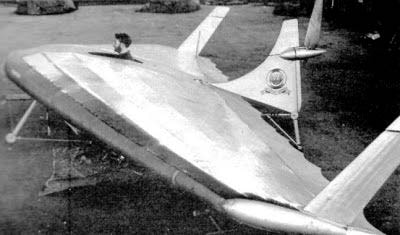 A considerable amount work on inflatable aircraft had gone on before ML became involved.  Most of this was done at Cardington which, during WWII had produced barrage balloons, inflatable dummy tanks and guns and even practical inflatable bridges.  A leading light in this work was Dan Perkins.  He redesigned the small barrage balloon carried by ships so that its shape produced lift and reduced the amount of hydrogen needed for it to fly.  He went on to build (with his own money) an inflatable man-powered aeroplane, the Reluctant Phoenix.

After Dan Perkins’ death, the research was continued by Francis Kiernan who produced more than a dozen inflatable inherently stable 45° swept delta wings of varying sizes.  He patented a number of the designs.  The first wings were made of two ply balloon fabric, then rubberised dinghy material was tried and finally proofed cotton or nylon. Francis developed the clever arrangement of internal diaphragms, made of porous fabric and tensioned to ensure that the wing maintained its proper shape. For testing, a simple wooden ‘car’ was suspended under the wing and a 60 hp McCulloch target drone engine was mounted as a pusher.  With sixteen silk or terylene rigging lines from wing to car the wing was stressed to no less than 6g!
Inflation was initially by electric pump though a strut mounted windmill driven pump was found to be adequate.  As the aircraft ascended excess pressure was released through relief valves.  It was whilst descending into higher pressure air that the pump was critical to prevent the wing collapsing.  Hinged elevons on the wing tip trailing edges were held in the neutral position by bungee and the silk lines to the control column moved them differentially for roll control and together for pitch.  A small vertical fin was fitted above the wing to help directional stability.

The pilot’s panel included basic engines instruments and an altimeter.  A standard ASI wouldn’t be effective at the low speeds expected so airspeed was measured by a simple meteorologist’s hand held anemometer taped to a strut. When inflated and ready for flight, the whole assembly weighed approximately 900 lbs.  The pilot chosen for the first flights of this flexible flier, Sqn Ldr Ron Harvey, was highly experienced in unusual machines, including the ‘flying bedstead’ VTOL test vehicle which had, of course, zero airspeed.
It was a still summer evening in September 1954 when the ‘Cardington Kite’, or ‘Dumbo’, or the ‘Air Jeep’ (no one could decide on a suitable name) was inflated at the end of Thurleigh’s enormous 10,000 ft runway.  When the engine was warm, Harvey opened the throttle and, after a surprisingly short run, the thing levitated at about 32 mph and flew. 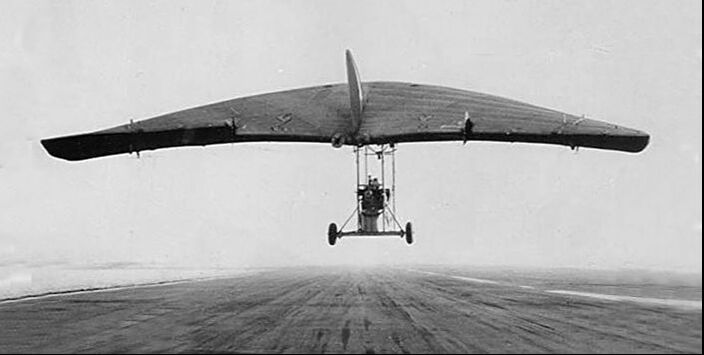 Harvey found it very easy to fly. The controls worked well.  The ‘ailerons’ were a little sluggish but the rudder was particularly effective and helped the roll.  After a short hop, Harvey closed the throttle and the wing sank gently to the ground.  Later flights uncovered an unusual and unique problem.  One of the flights ended in a heavy landing even though the stick was held right back.  It was a sunny day with small cumulus clouds crossing the sky.  The wing had flown into a cloud shadow and the air in the wing cooled and lost pressure.  It seemed that it would be prudent to have an electric pump for instant use.

Having proved the concept, the project was handed over to M.L. Aviation to meet the specification of the secret stealth aircraft.  The simple ‘car’ had to be beefed up to carry pilot and passenger. A better tricycle undercarriage was fitted and the wing support struts strengthened.  These changes meant that the controls had to be re-routed and the control column now hung   down from the wing. The central fin was removed (too radar reflective?) and replaced by two small square fins fitted ahead of the elevons.  The drone engine was replaced by a 60 hp Walter Mikron which would increase the cruising from 45 to 58 mph.
In March 1956 testing was carried out at Farnborough. What was now referred to as ‘the Durex Delta’ became the responsibility of Flt Lt Wally Bainbridge.  Caution was the watchword.  Flights were made only in calm conditions – max. wind speed 5 kts – and  no higher than 300 ft.  Bainbridge found the delta ‘quite difficult to fly’, ‘sluggish’ and with high stick forces.  Sometimes, he had to push hard to prevent the nose from pitching up on take off and on the next flight needing full aft control to get it into the air.  In a slight crosswind, he lost lateral control and the delta slid into a small tree, the branches pierced the fabric and it crumpled into a hissing collapse.

During repairs, it was found that the wing had been incorrectly rigged.  However, sorting this out brought no transformation and it performed little better.  Testing limped on, at Farnborough, at RAE Bedford and at Boscombe Down.  It even appeared at White Waltham where Peter Twiss compared its handling with the record-breaking Fairey Delta.  Interest in the inflatable delta deflated and in 1960 it was quietly stored in its birthplace at Cardington. 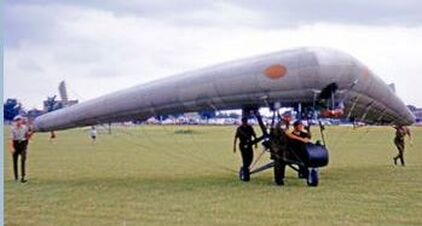 There was a brief re-appearance.  At a display of Army Aviation at Middle Wallop in 1969 the ML Aviation Utility, XK775, to give it its full name, was brought out of retirement and real soldiers - not re-enactors – inflated it, taxied it and even hopped it briefly into the air for its final flight.

Inflatable aircraft have appeared elsewhere.  In fact, as long ago as 1783.  But using inflation for aeroplanes as opposed to balloons seems to have emerged in the 1920s.  A friend of Taylor McDaniel died after an accident in the Brazilian jungle and Taylor mused on how he could have been rescued.  The chain of thought probably went through river – floatplane- easily available and even might have included rubber trees.  The outcome was a patent for an inflatable glider which was built and flown in 1931.  The pilot experienced control problems, presumably after some deflation distorted the shape of his unpowered glider.  There’s no evidence that these pictures have anything to do with Mr McDaniel’s work but they illustrate the situation perfectly.
Goodyear, who knew all there is to know about rubber, revived the idea in the early 1950s and proposed an Inflatoplane to rescue downed pilots. They were so excited by the idea that they built and flew the first prototype in just 12 days.  They claimed it could be dropped by parachute and 10 minutes with a hand pump would expose the 40 hp Nelson engine.  Starting this would complete the inflation and the plane would be almost instantly ready-to-fly.

Testing was successful and they quickly built another 10 models for testing by the Army and Navy.
They also carried out their own testing and produced an Inflato-floato-plane which was more basic but somehow seemed much closer to the original concept.

And still they appear.  Zhang Bingyan is an engineer working with Henan University in China.  He’s spent 20 years working on his design for a practical inflatable aeroplane. Five years ago, he brought this model to an exhibition.  He’s now over 70 and still hoping to build the full-size thing.

It seems that the soft-body concept will always bounce back.  BAE’s Advanced Technology Centre are working on a flexible fibre material with a tensile strength at least 10 times that of steel.  It’s a ‘smart skin’ with sensors to monitor temperature, airspeed, physical strain and movement. The 20 ft span test vehicle is made from a rubber composite, apart from wheels and its rear-mounted engine, and has already flown at 120 mph. They say that even if it falls from the sky, it would survive the impact with the ground.