​The FAST Museum is housed in a historic building.  It was built in 1907 as the headquarters of the Royal Engineers Balloon School.  It is now known as Trenchard House, named after the man who first occupied it in 1914.  FAST was formed in 1993 to save as much as possible of the RAE when it was threatened with closure.  The Museum, which is run entirely by volunteers, holds a wide range of exhibits, many showing the research and development work carried out at the RAE.
Some of the Gate Guardians – a Hunter T 7 and a Lightning T 5.
The Jindivik target drone was used at the Aberporth range in Wales.  It survived 12 sorties. 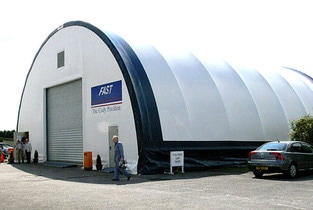 ​A significant exhibit is one of the most recent and is proudly displayed in its own special hangar.

The first successful controlled powered flight in Britain took place at Farnborough on 16th October 1908.  Just two years before the 100th anniversary, a decision was made to build a replica of the Cody Flyer in time for the centenary Celebrations.  The work progressed so well that it was finished in time to be shown the Farnborough Air Show in July 2008.  It’s now displayed in this Cody Pavilion, where we met David Wilson, who had managed the whole project.  He told us the story of Cody’s achievement.
​
The museum in Trenchard House is packed with Farnborough memorabilia.
This model has over 100 pressure measuring points                    The Miles M-52, which was to be flown by Eric Brown (not a wind tunnel model)
built into it. 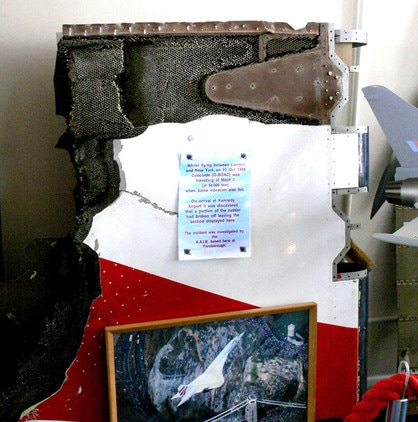 ​The card with this exhibit reads:

Whilst flying between London
and New York on 11th October 1998
Concorde (G-BOAC) was
travelling at Mach 2
(at 54,000 feet)
when some vibration was felt.

On arrival at Kennedy
Airport it was discovered
that a portion of the rudder
had broken off leaving the
section displayed here.

The accident was investigated by
the
A.A.I.B. based here at
Farnborough.

Many thanks to the hospitable volunteers who are justly proud of their fine museum.