This museum is in Doncaster, tucked away at the far end of a sprawling new development of ‘out-of-town’ shops, leisure facilities and light industries. Probably this is not the most inspiring introduction for a visiting aircraft enthusiast but first impressions can be deceptive.

To begin with, it would be remiss to overlook Doncaster’s association with aviation. You have to go back a long way but the town has the proud boast of holding the very first flying meeting in the UK. This was in 1909 when the pioneers of this new-fangled activity were invited to demonstrate their aeroplanes on Doncaster’s racecourse. 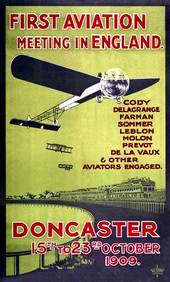 The meeting was somewhat restricted by the miserable October weather but Samuel Cody (who had been working for the Army and had developed their Aeroplane No 1) took advantage of a non-flying day to become a naturalized British citizen. After the flag was ceremoniously raised and the band played Cody at once sent in his entry for the Daily Mail £1,000 prize for the first British aviator to fly a circular mile on an all-British machine. He didn’t win it. It was Moore-Brabazon who took the prize a week after the meeting. In the next few years flying continued intermittently at the racecourse, until 1916 when a new airfield was laid out nearby and used by RFC squadrons. By 1932 it was sufficiently developed as a civil airfield to attract KLM to open a regular international service to Amsterdam.

In 1938, the expanding RAF moved in. (The buildings it put up included the hangar and sheds which are now occupied by the SYAM). During WWII the airfield was home to various training and transport units and also converted newly-delivered American C-47s into RAF Dakotas. After demob, it became, rather grandly, the South Yorkshire Airport but it was used mainly for gliding and club flying. The last flight was ceremoniously made on Christmas Day 1992 and the airfield closed to become a ‘development site’.

The South Yorkshire Aircraft Museum had been growing at other sites since 1973. In 1999, they managed to arrange with Doncaster Council a 40-year lease on a corner of the old airfield. (The length of the lease is critical because they can qualify for substantial grants only if they hold a lease of at least 25 years). After repairing leaks and making the buildings habitable they have acquired far more airframes and exhibits than they can show comfortably so at the moment the hangar is seriously overcrowded. However, the exhibits in the nearby huts are well laid out to a high standard. The visitor is struck by the large number of helicopters on display. This is partly explained by the presence of the Yorkshire Helicopter Preservation Group who moved from Elvington to Doncaster in 2002.

Aeroventure (the SYAM) is an active group holding many events, such as reunions of 616 Sqn, formed at Doncaster as South Yorkshire’s auxiliary unit in 1938 and also a special display attended by many veterans on the 30th anniversary of the Falklands Expedition. The museum has been chosen as the site for a Battle of Britain Memorial to be built next year. This is appropriate in view of 616 Sqn’s involvement in the Battle. For the future, there are plans to extend the site to almost double its present size which will allow the erection of more buildings and improve the displays. It will make the museum well worthy of another visit. 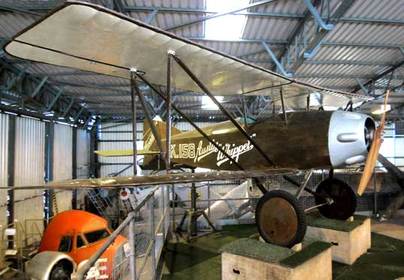 ​​The Whippet was produced by the Austin Motor Company in 1919 to take advantage of the expected post-war boom in private flying. Only 5 were sold although they reached as far as Argentina and New Zealand. Note the lack of bracing wires on the folding wings: neat steel struts were used instead. This replica was built by Ken Fern, who is currently involved in restoring the Mollisons’ 1934 DH-88 Comet, ‘Black Magic’.
The museum is pleased with a recent acquisition. The Blackburn B.2 was overshadowed by the Tiger Moth and had a short life as a trainer when requisitioned by the RAF. In 1940 two B.2s, G-ADFO and G-ACBH, both suffered accidents and were effectively written off. However there were sufficient components from these and other incidents to justify a rebuild. Somehow one fuselage acquired both registrations. It next turned up with an ATC squadron at Brentwood and from there was consigned to a scrapyard in deepest Essex.