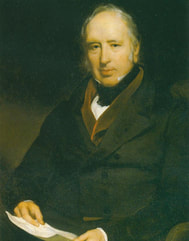 . . . was born in Scarborough in 1773, the son of Sir Thomas Cayley.  His mother, Isabella, was a well-educated Scot and saw her son’s early interest in mechanical things.  She chose private tutors who were mathematicians and scientists.  In the later stages of his education he was based in London and moved in the right circles to become acquainted with members of the Royal Society.  He was just nineteen when his father died and he became Sir George. 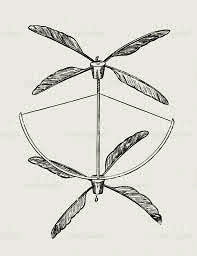 His interest in flight emerged early, probably in 1796 when he was given a French helicopter toy. Although it is mentioned briefly in his notes in 1809 it clearly did not inspire him and he never made any use of any kind of a propeller in his later work.


The first record of his development of a flying machine is in 1799 when he experimented with the movement of inclined plane surfaces through the air using a ‘whirling arm’.  It was fitted on the edge of a balcony in his house. 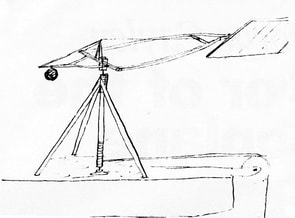 The vertical pole is rotated by a string which passes over a pulley and is attached to a weight.  The angled board of 1 foot square (most of his ‘wings’ had a very low aspect ratio) is balanced by a counterweight.  He measured the amount of lift and drag produced at angles of 3º to 18º and recorded the results in his Aeronautical and Miscellaneous notebook.
“Theory would estimate the increase of resistance…as the square of the sine of the angle of incidence, but experiment determines it to be in a mean between the direct ratio of the sines and that of their squares.” He acknowledged that, without a barometer, he had not measured the weight of the atmosphere at the time of the experiment.

He incorporated the wing in the design of a flying machine, sketched out (below) in 1799.  A silver disk, also dated 1799, turned up in 1925 when an elderly lady handed it in, anonymously, to a Scarborough jeweller.  It is now in the Science Museum.  Note that the disk shows the triangle of forces - angle of attack, lift and drag and resultant– though not arranged as we would do today. 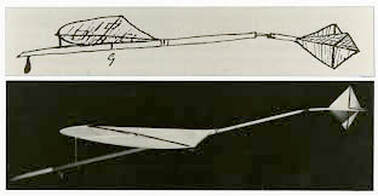 It skimmed for 20 to 30 yards at 15 ft. per second, undoubtedly the first ‘aeroplane’ to fly. The notes and the sketch are dated 1804. The model in the photograph is nearly two centuries younger and it performed just like the original. 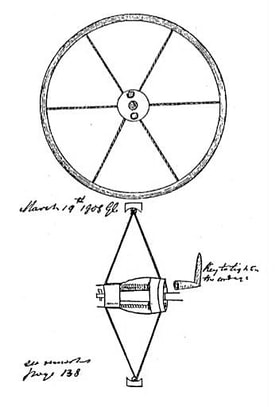 George’s 1808 notebook includes some thoughts on the curvature, or camber of a wing speculating that this could enhance the lift.  Also, having examined the wing of a heron which he had shot he thought that its long thin wing could be better for ‘slow flights’.

At the same time, he gave some thought to making ‘the lightest possible wheel for ‘aerial navigation cars’.  He dispensed with rigid wooden spokes and suspended the hub in the centre of the wheel by tensioned cords with a key to adjust the tension.  (When a replica of Cayley’s glider was made in 1972 the wheels were built to the original design and they were robust enough to perform perfectly).

Cayley considered patenting his wheel but was surprised to find that a Theodor Jones had already taken out a patent for a similar device.

Throughout his life, Cayley believed that his work should be available freely to all and any results honestly published.  This was in marked contrast to some other researchers who routinely adjusted their findings and claimed unwarranted successes.  His view was shared by his friend Charles Babbage (father of the computer) who felt so strongly about manipulation of data and scientific deceit that he wrote and published a book about it. 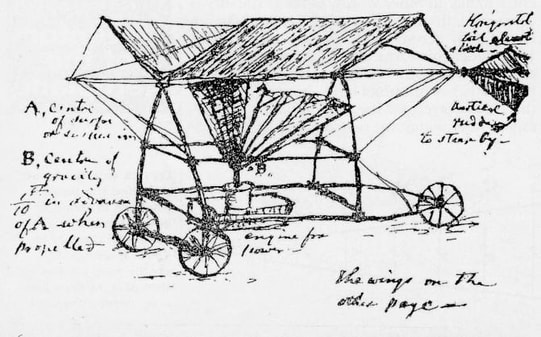 The model glider had been launched by hand: the man-carrying aerial navigation car would need some kind of power to keep it aloft.  Steam power had been around for many years - Newcomen’s atmospheric engine was invented in 1712 - but Cayley rejected steam because of the weight of the engine.

He experimented with gunpowder.  The expanding gas of an explosion in the base of a tube would create a vacuum in the tube and draw down a piston.  He apparently made one work but abandoned it in favour of a hot air engine.  Curiously, despite having seen how the propellers of the helicopter toy produced thrust he intended that his engine would drive flapping paddles, rather like aerial oars.

In 1818, another glider appeared.  The wing had dihedral to give some lateral stability and the tailplane was now at a negative angle.  There is nothing in the notes to explain the reason for this but it was certainly effective in giving longitudinal stability.  Apparently, it was ‘a wonderful performer’. 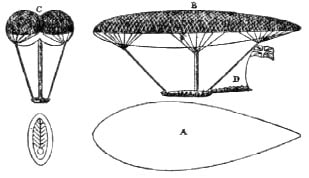 Balloons had being flying since 1783 and there were many attempts to make them navigable with some form of propulsion.  George joined in.  In 1816 he published his first paper on airships.  He argued that they should be large.  As size increases, weight and air resistance increase as the square of the dimensions, whereas lifting force increases as the cube.  And airships should be the right shape.  His earlier work on air resistance had shown that a shape ‘like a well-fed trout’ was needed. So far, so good.  He still believed that the propulsion would come from flappers though they are not shown in this sketch. 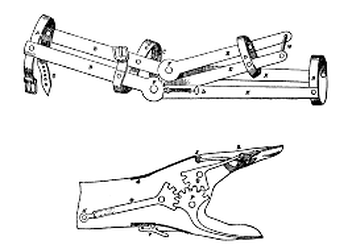 George’s time was not devoted solely to research in aviation.  He became heavily involved in the Muston Drainage Scheme, a plan to drain a large area of land near his own estate.  He made a presentation to Parliament to get the scheme underway.  And he was developing his own estate, being one of the first landowners to give allotments to his labourers.

Parliamentary reform, founding both the Yorkshire Philosophical Society and the Regent Street Polytechnic (now the University of Westminster), designing an artificial hand (to help the son of one of his tenants), oh, and a self-righting lifeboat.  All these and other things occupied his time. 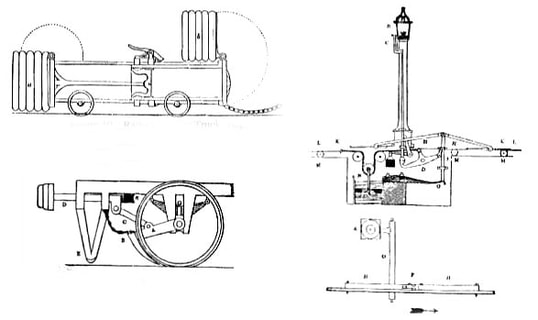 He was at the opening of the Manchester- Liverpool railway in 1830 when William Huskisson died under the wheels of the Rocket.  This event, and other railway accidents, produced a flood of inventions and ideas.

Here are his plans for a buffer truck, an automatic brake and a block signalling system. 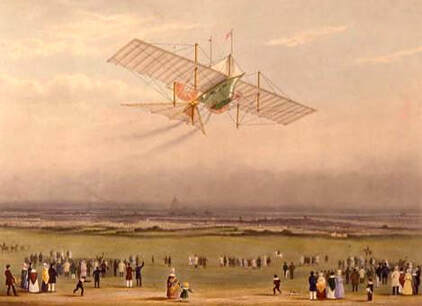 It seems to have been the publication of a paper in 1843 on an ‘Ariel Steam Carriage’ that re-awakened George Cayley’s interest in flight.  William Henson came across the work of John Stringfellow who had made a model aeroplane powered by a tiny steam engine.  This had been launched, indoors, from a wire and flown successfully across a disused factory building.  From this tentative beginning, Henson dreamed up a grandiose plan – and took out a patent - to build a machine with a span of 150 feet to carry passengers. 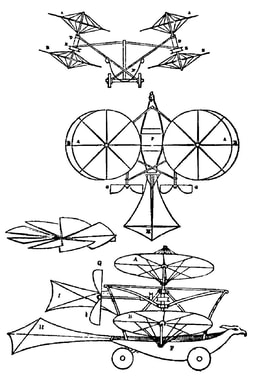 George Cayley immediately published a paper criticising the design.  The wing had no dihedral and would be insufficiently strong.  It would be better to build the wing as a three-decker with 10 ft gaps to allow the air to pass freely between the wings.  He published one of his recent designs to show what he meant – a biplane helicopter convertiplane, no less.

(Henson’s plan was ridiculed and he and Stringfellow quietly disappeared from the scene).

Whilst there is no evidence that anything practical emerged from Cayley’s convertiplane design the multiplane element appeared in a glider he built in 1849.  Hanging under the triplane wing and stabilising tail and fin was a car to contain the ‘pilot’ and a hot air engine to drive a pair of flappers.  Behind the car was another moveable tail unit which George did not merit being called a control but an ‘influencer’. Before the engine and flappers were fitted he decided to test the glider. 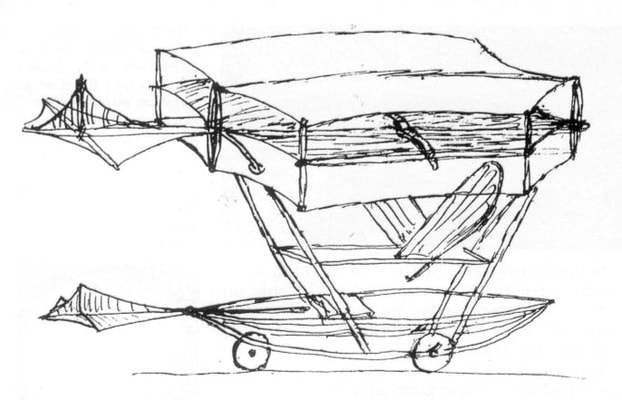 With ‘some persons pulling the apparatus against a very slight breeze’ the balance and steering were ‘ascertained and a boy of about ten years of age was floated off the ground for several yards’.

1849 – the first controlled flight by a human being?

George wanted to do more controlled tests and measurements so he updated the basic glider design which had flown in 1818.  Clear drawings and dimensions of the 1849 model were in a paper sent to the Société Aérostatique et Météorologique de France. 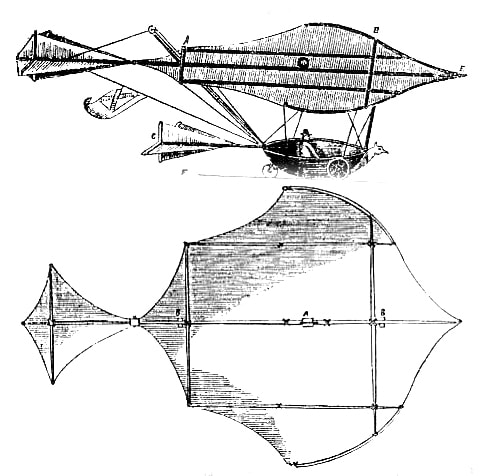 A series of hand launched glides at varying angles of incidence and tailplane settings produced a comprehensive table of performance which were used for the ‘governable parachute’, a monoplane glider that was famously tested at Brompton Vale by Sir George’s coachman. Although we know he resigned we don’t know if he actually left. Certainly, he never flew again.

At the time, 1853, Sir George was eighty years old.   There is no record of any further experiments and he died three years later.


There is a strong thread of ‘If only . .’ throughout the tale of Cayley’s solitary research.  How much of his pioneering work was used by the Wright brothers, who did succeed in flying 50 years after the reluctant coachman, is not clear.  They certainly read some of his published papers but, significantly, acknowledged that Otto Lilienthal was ‘the greatest of the precursors’.

Faithful replicas of the last two gliders have been made.  Both flew well.