Last month we looked at Burt Rutan’s canard designs.  His other work is even more interesting and much can be found on the internet.  Here are a few pointers for your research.

The designs which made Rutan’s name were the Vari-Viggen and Vari-Eze.  His work attracted the attention of two of his friends who were working for NASA.  They were studying the concept of using a swing-wing for a future Boeing trans- or supersonic airliner.  NASA’s budgets were tight at the time so to keep costs down they asked Rutan to use his quick and cheap method to build a scaled down test plane.  Using two small jet engines developed by the Ames Corporation, Rutan built a 15% scale version, the AD-1.

The AD-1 convinced Fairchild-Republic that Rutan could help in their bid to offer the USAF a replacement for its long-serving trainer, the Cessna T-37 Tweet.  In 1981 they asked him to build a 62% model of their Next Generation Trainer (NGT) design.  Too small to carry more than one pilot, it provided sufficient performance data to ensure winning the contract.  In the end, it all came to naught.  The Navy had decided they also needed a trainer and their specialist requirements caused the NGT contract to be cancelled and re-written.

Rutan formed Scaled Composites in 1983 specifically for the design and test of prototypes like the AD-1 and the NGT, built at the request of other organisations.  (His original Rutan Aircraft Company had been set up to sell plans for homebuilts, in which there was little profit, and it was open to the frivolous lawsuits of product liability claimants.  RAF was finally closed down in 1985).  The first project for Scaled was a Microlight, built for Lotus Cars.  It was Colin Chapman’s last big idea before his early death and, although it was demonstrated at Hethel in 1983 nothing came of it.
Rutan had been part of the design team which produced the single seat Quickie but he wasn’t involved with the two-seat Quickie 2.  Back in 1981 one of these was entered in the CAFE – Competition in Aircraft Fuel Efficiency.  When it won and was lauded as ‘the world’s most efficient airplane’, it was a challenge that Rutan couldn’t resist although it took him until 1988 to do something about it.

Efficiency was measured by the amount of fuel used, payload and average speed over a 400 mile course.  Scrutineering was meticulous.  The aircraft were weighed before and after fuelling.  Passengers were weighed separately (they would consume drinks and food, and even sweat off some weight during the 400 mile flight) and so the weighings were repeated at the end of the course.

Rutan produced the Catbird (the name arose from its forward-swept ‘whiskers’).  To keep cabin space as small as possible, he cleverly tucked the passengers’ legs alongside the centrally-seated pilot and into the narrowing rear fuselage.  At the time when Catbird was being built, Scaled Composites was still owned by Beech.  They were interested in the efficient design features that could be used if and when they upgraded or replaced the Bonanza.  They contributed by providing an efficient turbo-charged 210 hp Lycoming engine.  Catbird won handsomely, of course, with an efficiency rating 18% better than anything achieved before.  It went on to gain two class world speed records (at different weights) over a 5000 km course).
For many years, Rutan kept it up in the hangar roof, suspended upside down - because the upper surface is ‘prittier’.  In 2011, it was restored and is flying again, setting more records. 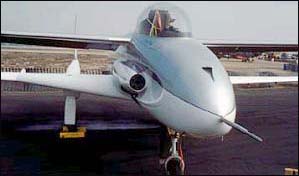 ​​The US Army had dreamed up a low-cost attack aircraft (cheaper than a helicopter) as part of an Agile Response Effective Support programme.  In 1990 Scaled built the ARES, or Mudfighter, with typically Rutan features.  The small 2,950 lbs thrust P&W JT15 turbofan was angled 8° to the left to face the single intake on the port side of the fuselage.  The nose was also angled to the left so that the 25mm five barrelled Gatling gun, fitted on the right side to keep the blast well clear of the engine intake, was close to the centre line.  When the gun was fired the blast impinged on the fuselage causing a yaw to the left which exactly counterbalanced the yaw effect of the recoil. 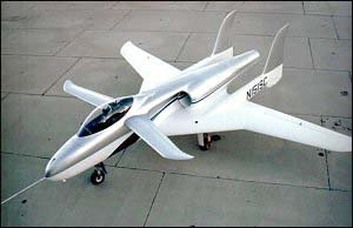 ​Although small – 35 ft span - the design proved to be outstandingly successful.  However, the ARES team couldn’t persuade the Army’s fund allocators to put it into production.  It was tucked into the back of Scaled’s hangar, being used later in a film and, reportedly for tests in the development of the Firebird drone.

In 1996, Rutan began work on a private project.  He wanted a comfortable longer range aircraft to visit other places around the world - Europe or Australia.  The Beech Baron was about the right size, but not efficient enough and subject to the usual difficult handling if one engine failed.  Rutan went through a series of potential modifications that would result in his favourite aeroplane and the one he was most proud of – the Boomerang.  Principally, he wanted to improve controllability in the engine-out case by keeping the engines’ thrust lines closer together.  Moving one engine forward and closer to the nose meant the other engine had to move back to restore the CG position.  Here is a selection from a series of diagrams showing the progression to the final shape. 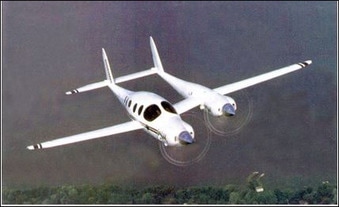 ​​Although the Baron’s seating for six was reduced to five (one seat could be converted into a bed) the Boomerang’s passengers sit in a larger cabin with much more shoulder room.  By far the most significant improvement was the transformation of the handling in the case of engine failure.  The engines were just over 7 feet apart so a failed engine caused little asymmetric thrust and the handling was hardly affected.  With 60% less power than the Baron’s, range was increased by 56% at a cruise speed 41% higher.  The Boomerang could fly 2,400 miles at 24,000 ft at a speed of 240 mph using 170 gallons of fuel, if the passengers could cope with the 10 hour flight. 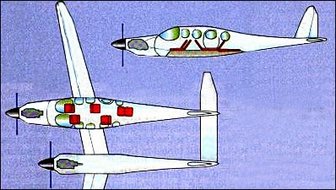 When he finally retired in 2010 Burt was reluctant to bury Boomerang in some museum so he handed it over to one of Scaled’s employees, Tres Clement.  He leads a group which restored and fitted out the Boomerang and it now tours the airshow circuit.  The eccentricities of the aeroplane are much enjoyed.  Three passengers have a normal entrance door to the cabin but the pilots climb in through the outer (starboard) windscreen which pulls inward and slides back. 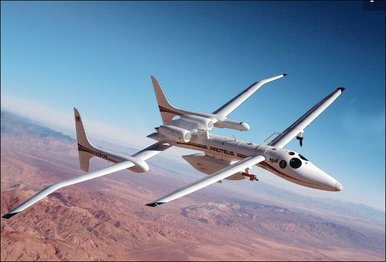 Proteus is a HALO (high altitude, long operation) project which was developed with NASA.  Capable of being flown by two pilots in a pressurised cabin or operated as an unpiloted drone, Proteus first flew in 1988.  Powered by two small Williams turbofans its shape is pure Rutan with semi-detached sections (wingspan either 77’ 7” or 92’).  During testing, it set several class altitude records. 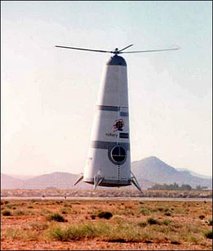 ​​What Rutan called at the time (1999) ‘the most important project ever to come in the doors’ was Roton.  The Rotary Rocket Company were working on a scheme to use a rocket-tipped rotor to achieve a controlled soft landing of a space vehicle after re-entry.  Scaled Composites were asked to build a test vehicle because of their wide experience of using sophisticated composite materials.  Keeping the weight down was critical.  Burt’s mantra for testing a component was ‘Throw it in the air.  If it comes down it’s too heavy’.  The rotor was powered by liquid oxygen and kerosene and did prove to be capable of climbing to 75 ft and flying down the runway.  Inevitably, the enormous cost of developing the rest of the programme was beyond the reach of the Rotary Rocket Company.  The company went bust and any useable components were auctioned off.
The X Prize, announced in 1996 changed Rutan’s focus.  It offered $10 million to anyone who could launch a craft carrying three people into space and repeat the feat within two weeks.  No fewer than 26 teams across the world declared an interest.  Burt built the Proteus in 1998 and, significantly, it was quite capable of launching a spacecraft.  The problem to be solved was how to bring the craft back safely so that could be re-launched.  The simplest method, by parachute, was quickly rejected.  It was uncontrolled and needed complex retrieval and possible rebuild of the spacecraft.  A landing after deceleration and glide was preferred. 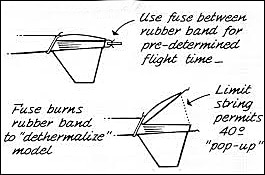 ​
​Burt found the answer to the deceleration stage by reverting to his youth.  Like many of us, Burt had been a model-maker.  He remembered launching his model hoping that it would a) catch a thermal and fly longer than its competitors and b) fly out of the thermal before it drifted away downwind.  For a) he relied on luck, for b) almost certainly, he used a dethermaliser.  When the tailplane popped up, the nose pitched up and the model settled into a stable parachute-like descent.  Using this ‘feather’ technique on a spacecraft would bring it safely down into the atmosphere when the pilot could move the tail to its normal position for landing.
Burt’s practical design for an X Prize (later called the Ansari X Prize) challenger attracted the attention of Paul Allen, the co-founder of Microsoft.  He immediately offered $25 million so that Rutan could design and build SpaceShipOne and its launch vehicle White Knight.  SpaceShipOne was powered by a hybrid rocket motor burning a mix of rubber and liquid nitrous oxide.  Released from White Knight at an altitude of 14km, the rocket was lit and SS1 accelerated at 4g into a 65° climb until the fuel burned out.  Coasting to a height over 100kms (officially space) the crew would briefly experience weightless free fall.  The tail would be configured for re-entry (up to 5g) and when down to about 15 kms reconfigured for the glide and landing.
Mike Melvill flew the first of several unpowered flights and on 17th December, 2003 the centenary of Orville Wright’s first powered flight was celebrated by Brian Binnie in the first powered flight of SS1.  Mike Melvill took SS1 into ‘space’ for the first time on 21st June 2004 and again on 9th September for the first prize flight.  Brian Binnie took the second flight to 112 kms on 4th October to claim the $10 million prize.
It hasn’t been easy.  There have been serious setbacks.  Three people died when a rocket engine blew up in 2007.  Then there was the bizarre early feathering accident on 31st October 2015.  But, such is the faith of potential passengers that more than 650 bookings are currently on the waiting list.  You can add your name to the list here: http://www.virgingalactic.com/human-spaceflight/your-flight-to-space/.

Burt Rutan has certainly come a long way from the Vari-Viggen days.  He officially retired in 2011, though he has since worked on a flying car and built what must be a triphibian, a flying boat with wheels and skis.  This article has touched on just a small proportion of his remarkable career and you can find out much more from http://www.scaled.com/.  Also look at http://stargazer2006.online.fr/index.htm.  It’s a website that doesn’t seem to have been updated since 2006 but it has a wealth of easily accessible information.