The Second World War started badly for the Allies.  From behind the Maginot Line they glared at the Germans throughout the winter of 1939/40. The German attack through Holland and Belgium in May 1940 soon overwhelmed the disorganised defences.  The British were pushed out of France, leaving the country occupied by the victorious German troops.  All French symbols and flags disappeared and were replaced by the hated swastika.  Any resistance disappeared underground and the French adopted a miserable life style under the strict control of the enemy.

Working undercover in Paris was Major Ben Cowburn.  He was part of the Special Operations Executive which had been formed to organise and support any groups of French people prepared to carry out acts of sabotage or disruption against occupying forces.  He witnessed the daily display of the Germans, flaunting their superiority and dominance by marching up the Champs-Élysees, bands playing and flags flying.  Every day, between 12.15 and 12.45, their goose-steps drummed in the message of power and control.  What a target that would be for some sort of attack - and how it would raise the morale of the watching French citizens.  No resistance group was capable of anything effective enough to have sufficient impact – but maybe the RAF could join the parade.  A few carefully placed cannon shells and bullets would really raise the morale of all French people.  It was in September 1941 when he passed on his idea to the SOE in London.  They approved the plan and sent it on to the Air Ministry.

It bounced around the various departments.  Initial thoughts naturally turned to using a Spitfire.  The round trip from the south of England to Paris and back is 350 miles.  At cruise power a Spitfire could theoretically fly about 430 miles before its tank ran dry but this gives no allowance for manoeuvring, higher power settings, correcting navigational errors, diversions due to weather, etc. etc.  So, a Spitfire would need to be modified to carry extra fuel.  And would just a single Spitfire be sent?  A couple of escorts would be prudent to fight off any opposition on the way.   And they could be fitted to display blue, white and red smoke in a display flypast.

Before Fighter Command’s ideas overtook common sense it was accepted that an aeroplane with longer range than a Spitfire would be needed.  A Blenheim?  No.  That would need an escort. Back to the Spitfire range problem.  What about a Beaufighter?  It was coming into service both as a night fighter and with Coastal Command.  It had the range, a navigator to relieve the pilot’s workload and plenty of fire power to have maximum effect.  The night fighters couldn’t be considered because they were fitted with radar the Germans shouldn’t know about.  The plan landed on the desk of Air Chief Marshal Sir Philip Joubert de la Ferté, C-in-C of Coastal Command.

He warmed to the task, naming it ‘Operation Squabble’.  The coloured smoke notion was replaced with a French Tricolore which would be dropped, ideally to drape over the Arc de Triomphe.  He called for volunteers for an ‘unsafe operation’.
The crew he chose were Flt. Lt. Gatward and Flt. Sgt Fern. (Neither liked the names their parents had given them.  Alfred Kitchener Gatward was known as Ken and Gilbert Fern preferred George).  Both had previously flown Blenheims, Ken in France early in1940 and George with Coastal Command over the Bay of Biscay.  They crewed up early in 1942 when 236 squadron converted to the Beaufighter.

They were sent on detachment to Tangmere on the south coast.  Their Beaufighter IC was fitted with armour plating in the crew’s seats and a ciné-camera was fitted in the nose.  This couldn’t be made to work properly so George was given a heavy hand-held F24 camera to make a photographic record of the operation.  Low level strafing was practised on a ship wreck in the Channel.  They planned to shoot up the parade then strafe the French Naval Ministry building which had been taken over by the Kriegsmarine.

A huge Tricolore flag was found in the Portsmouth naval base.  The parachute section at Thorney Island was asked to cut it into two smaller flags, sewing in pockets to take an iron bar weight.  The second flag would be dropped over the Kreigsmarine building.  Ken and George climbed into the roof of an empty hangar carrying the Beaufighter’s flare tube so that they could drop-test the flags away from any prying eyes.  When all was ready they waited for the weather to cooperate.  It had been decided that they should go only when there was complete cloud cover all the way to Paris.

It was now May, 1942.  On the 13th, the forecast was good and they set off.  Over France, the cloud disappeared and they were forced to turn back.  It happened again three days later – and again on the 21st, also on the 26th.  There was some concern that, the longer this went on, the greater would be the risk of a security leak.  Also, Ken heard that there was ‘increasing irritation’ from on high about their lack of success in carrying out the operation.  They decided to go regardless of the forecast.

On 12th June, they were given another satisfactory forecast.  They took off in heavy rain at 11.29 am and headed for Paris, flying at 220 mph no higher than 100 ft.  The forecast lived up to its reputation and over France the cloud thinned.  Soon they were flying in bright sunshine.  The Eiffel Tower came into view, nearly thirty miles ahead of them.  As they circled the Tower they flew into a flock of crows.  One jammed into the starboard engine’s oil cooler.  The temperature rose. Gatward pressed on turning to line up with the Champs-Élysees, switching his guns to ‘Fire’.  Fern put the first flag down the flare chute and had difficulty holding it as the slipstream tried to drag it out.  ‘It’s breaking my arm’ he said.  He waited to hear the shout of ‘Now!’

The flag fluttered down and according to reports that filtered through later, draped over the Tomb of the Unknown Soldier.  Gatward was astonished – and annoyed - to see no parade.  The street was empty.  The whole purpose of the operation seemed to have evaporated in a flash.

He swung round in a turn to attack the Kreigsmarine building.  He kept low down ‘among the chimney pots’ in case there were any flak guns on the roof of the building.  The strike went well.  He could see the shells shattering the windows and doors.  Fern pushed out the second flag.  He saw some flak being fired at them but they were not hit. As they flew on the people in the streets waved at them and they noticed some Germans dodging behind their vehicle, one very fat soldier waving his fist.  Flags gone, George could now pick up his camera and take a remarkable series of pictures.  In all, he took 61 during the operation, not all as dramatic as this. 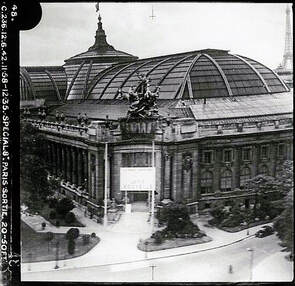 The Grand Palais des Champs-Élysées exhibition hall and museum. The sign at the entrance reads “LA VIE NOUVELLE”, an exhibition staged to encourage the French people to accept their ‘new life’ under the German occupation.

Note the Eiffel Tower in the background.  There were some sceptics who said that this had been added to dramatize the pictures that later appeared in Life magazine but careful checking confirms that it was in George’s viewfinder when he took the shot over Paris.

On the left in the pictures below is the Jardin des Tuileries near the Louvre and on the right the parting shot as the Beaufighter headed for home
The low level return flight across France was unhindered, at least by the Germans. Part of the unwanted passenger seemed to have broken off the engine and the oil temperature stopped rising but Ken found his vision increasingly obscured by the large number of dead insects spattered on his windscreen.  Over the Channel they flew back into the rainstorm which helped wash them off.  They landed at RAF Northolt.  The camera went off to the Photographic Section, what was left of the dead crow was removed from the engine and George and Ken were taken to separate rooms for a thorough de-briefing.

They were sent on leave with strict instructions not to talk about their flight, an order they could disregard when the news broke on the radio.  Ken Gatward was awarded the DFC and George Fern the DFM.  George was also commissioned.

The news of the operation went around the world, inevitably embellished by spurious tales of parading Germans scattering in panic.  It was seen as an example of the RAF’s ‘dash and daring’ to show Britain’s support for the people of occupied France.  It was a success in that the dropping of the Tricolores was an undoubted morale booster, but by how much was impossible to quantify.  It certainly raised morale in Britain, but not in General de Gaulle’s Free French HQ.  He was furious that he had not been told about the operation beforehand.

It still rankled with the crew and with the planners in Coastal Command that there was no parade.  No satisfactory explanation was ever found.  In the end, it seemed that it might have been an error of timing caused by the Germans’ imposition of a ‘New European Order’.  They made French clocks synchronise with German time and so the Beaufighter would have missed the parade by being exactly one hour late.  Even that quite reasonable assumption has been dismissed by other analysts.

Ken Gatward returned to carrying out anti-shipping strikes with Coastal Command.  He rose to command 404 Squadron as a Wing Commander and earned a DSO, a bar to his DFC and a Mention in Dispatches.  George Fern became a Squadron Leader and went on to train navigators.  After he left the RAF he returned to his job in a grammar school as a well respected teacher of engineering drawing.

Gatward received another presentation in July 1949.  The dropping of the flag over the Arc de Triomphe had been witnessed by a Monsieur Jane-Luc.  He intended to thank the pilot somehow after the war ended but had died before he could do so.  His widow carried out his wishes by presenting a Tricolore to Gatward at an impressive ceremony before a large crowd in Southgate, near Gatward’s home.  The flag is now held by the RAF Association.