It might have been a bit shrouded by the Armistice Day events but the 9th November, 2011 was a notable day for celebration.  It was the 50th anniversary of the first successful human-powered flight (it used to be ‘man-powered’ but PC has taken over).

On 9 November 1961 Derek Piggott pedalled SUMPAC into the air on a flight of just 64 metres. Derek was no athlete.  He was CFI at Lasham Gliding Centre, an ex-RAF instructor and experienced film flier.  (You saw him fly Shuttleworth’s Boxkite in the ‘Magnificent Men . . . ‘and in ‘The Blue Max’ he threaded the viaduct in a red Fokker Triplane).   He said ‘We were going to train an Olympic cyclist but we couldn’t manage to teach him to fly’.

The best flight achieved by SUMPAC was 622 metres to a maximum height of 3.65 m in February 1962.  The 24m span SUMPAC - Southampton University Man Powered Aircraft - was designed and built by three post-graduate aeronautical engineering students.

You can see a film of the first flight – well, the first since Icarus, on http://www.britishpathe.com/record.php?id=981

Eventually, with a cyclist at the controls, Puffin crashed and was rebuilt as Puffin II.   And that crashed as well.  It was too seriously damaged to re-build and the bits found their way to Liverpool University, re-emerging as Liverpuffin.  It did fly but not well enough to record any significant distance
All this pedalling and puffing was encouraged by a prize offered by Henry Kremer, an industrialist.  £5000 was on offer (in 1960 this could buy a reasonable house) for the first person to fly a figure of eight course with a minimum height of 10 feet at the start and finish.  At first, entry was restricted to the British Commonwealth but in 1973 the prize was increased to £50,000 and opened to international entries.

Designs arose from all over the world.  You can find a surprisingly long list here - http://en.wikipedia.org/wiki/List_of_human-powered_aircraft but we’ll home in a local aspirant whose constructional approach was very different from the norm.

Some time ahead of the Kremer Prize offer, there were stirrings in one of Cardington’s sheds.  Dan Perkins was a senior experimental engineer at RAE Cardington.  As a junior, he had worked on barrage balloons in WWII and he realised that they derived lift, not just from hydrogen, but from their shape. He proved this to his sceptical colleagues by flying a balloon which was inflated by air only.  He designed a small balloon for ships which had a lift/drag ratio of 2½:1.  This was highly successful and earned him an award of £500.  He went on to design inflatable dummy tanks and guns.  Post war, there followed bridges which could be carried on a lorry and inflated to span 30 feet and also an inflatable glider.

Using his own money Dan developed an inflatable delta wing for a man-powered aeroplane, initially to work in ground effect.  The most successful version, the Reluctant Phoenix, weighed just 39 lbs with a wingspan of 31 ft.  97 successful flights were made in Cardington’s shed, the longest being 420 ft. Compared with almost all other designs it had two great advantages - it could be rolled up and carried on a car roof and, if it crashed, it bounced.  However, the propulsion system caused Dan considerable trouble and eventually he gave up.
After his death in 1975 the Reluctant Phoenix was passed to Frederick To who had previously designed a solar powered aeroplane.  Fred had always admired Dan Perkin’s engineering and developed the design sufficiently to drop the ‘Reluctant’.  His Phoenix, using polyester film, had a wingspan of 102 feet and weighed only 105 lbs.  Here are his team in March 1982 with Phoenix on the roof of their car.  They are on the way to Docklands where they had the use of an empty lorry park to assemble and fly their aeroplane.
Fred required his pedaller to produce only 1/3 of a horsepower and was content with a flying speed of just 8 mph.  A useful innovation was to move the controls by 11 actuators from radio-controlled models, thus saving the weight of control cables and also, by using a ground based radio controller, relieving the pedaller of the distraction of having to pilot his unwieldy craft.  Clearly, the Phoenix flew comfortably but Fred was diverted by an invitation from a Swiss company to develop his inflatable aircraft technology - not manpowered. 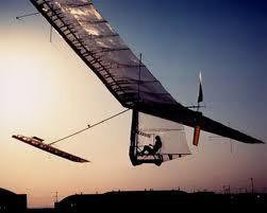 The prize was finally won by Gossamer Condor 2, a clever design by Dr Paul MacCready, a US glider pilot and scientist.  His pilot, Bryan Allen, was both cyclist and hang glider pilot and in 1977 he flew the first figure 8 at a gentle 11 mph over a distance of 2,172 metres 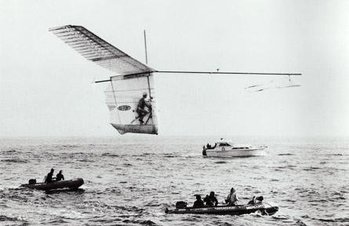 Read more about Paul MacCready on http://www.answers.com/topic/paul-maccready and watch an interesting video of his Gossamer and other achievements on http://www.personal.soton.ac.uk/aijf197/suhpa/kremer.html. 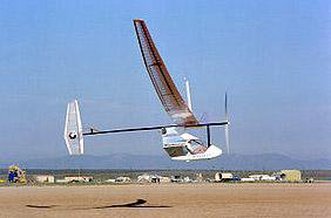 Even these magnificent flights have been exceeded.  This picture is of a Massachusetts Institute of Technology design, appropriately named Daedalus.  In April 1988 it flew from Crete to the island of Santorini, a distance of 74 miles in 3 hrs 54 mins, setting the current FAI distance and duration records for human-powered flight. There was some help from a tailwind which became an awkward crosswind as the pilot attempted a landing on the beach at Santorini and sadly, the delicate Daedalus crumpled in the surf.

MIT had already taken the £20,000 Kremer Prize for speed in 1984 when Monarch B flew a triangular 1.5 km course in under 3 minutes at an average speed of 32 km/hr (20 mph).  There’s even a record for a human-powered helicopter, a more challenging proposition than fixed-wing flight.  It might be only 19.46 seconds but it’s an astonishing achievement.

So what is there left to do in this field of highly technical, intensely physical form of aviation.  Well, there are still active developers around.   The 50th anniversary was celebrated at Lasham (where SUMPAC first flew) with a demonstration flight by Airglow.  Currently the only human-powered aeroplane operating in the UK, Airglow was originally designed at Cambridge and first flew at Duxford in 1990.  With a span of 25m and weight of 32 kgs (without the pilot/engine) it uses model aircraft r/c controlled servos to operate the controls.  Work on the project lapsed and it was taken over by Bill Brooks, technical director for a microlight builder, and Airglow flew again at Kemble this September and, of course, at Lasham on 9th November, where its longest flight was 1.6 kms.  Incidentally, one of the spectators was Derek Piggot, CBE, now aged 88 and still an active pilot.

Bill Brooks, who rebuilt Airglow, is also Chairman of the Royal Aeronautical Society’s Human Power Group.  The RAeS is inviting teams from all over the world to take part in an Olympic Games fringe event in July 2012. They could have their eyes on the Kremer Prizes which are still waiting to be claimed, £50,000 for a 26 mile Marathon course to be completed in under 1 hour and £100,000 for a more complex and much tougher challenge.


The winning aircraft will be suitable for batch or kit production, easily assembled (within 30 mins) and dismantled for transport in a roadable 26 ft container.  It will successfully fly two circuits of a 1500m triangular course, one in each direction in a total flying time not exceeding 7 mins.  One of the legs is to be aligned with a wind of at least 5 m/sec (11.2 mph).  Intriguingly, it will be allowed an onboard electrical power source for control and/or autostabilisation.

Keenly interested is Southampton University, again, who have a group of 10 fourth-year MA students actively working on their entry, SUHPA.  And Fred To is polishing his design of a non-pneumatic kit.