A Dip into my Photo Album

All these pictures were taken in the pre-digital age i.e. on film.  With a film camera you couldn’t immediately see the result of your shutter click. The exposed section of film hid in the camera until all 36 shots had been taken when the film would be dropped off at the local chemist’s.  After days of impatient waiting and several verses of ‘Some day my prints will come’ all would finally be revealed, intrusive backgrounds, tilted horizons et al.  Photoshop has allowed me to apply a certain of amount of compensation of sloping horizons and incorrect exposures.  Poor framing and boring viewpoints however must be tolerated.

Thorpe Park was the site of an old Ready Mixed Concrete gravel pit in Surrey.  It was opened as a leisure park and featured water sports, a Stone Age cave, Viking camp, Norman Castle, etc. and ancient water craft, including seaplanes!  Sadly, the seaplanes didn’t last long and the Park has since been dominated by convoluted roller coasters and other fearsome rides.   At the time of my visit (1979) they had assembled this lovely collection of replicas of three of the contestants in the Schneider Trophy race.

The S.5 replica was built by Ray Hilborne of Leisure Sports.  Made of wood it was less than half the weight of the original and powered by a 210 hp RR Continental engine.  Its first flight, piloted by Keith Sissons, was in 1975.  In 1982, it suffered an engine failure on take off and crashed into Thorpe Water Park  The remains, largely the fuselage, were bought by Bill Hosie who rebuilt it.  He was flying it over Falmouth when the tail was seen to be fluttering.  The fin broke off, the S.5 crashed and Bill Hosie was killed.  Now his son, Will, an accomplished aviator in his own right, has embarked on a third resurrection of this historic aeroplane and has launched a fund raising campaign (www.supermarineseaplane.co.uk).
Coming home one evening from a long business trip I was passing Bovingdon airfield.  Not actively used it was available for hire by film companies and was the scene of many interesting formations of Heinkels and Messerschmitts during the Battle of Britain filming.  Although I was eager to get home I had to stop and dig out my camera.  There was a group of five Mitchells circling to join the circuit and land.  I was able to get close to the perimeter track and take these pictures. The Mitchells were to ‘star’ in ‘Hanover Street’ and had just crossed the Atlantic.  That trip was covered by a film maker and it was broadcast on TV.  It’s well worth trying to track down ‘Mitchells Do Fly in IMC’.  The leader of the formation was Jeff Hawke (an aeronautical pirate who died ditching in the Adriatic on a gun running trip.

Yes, the ‘guns’ are broom handles.
Booker, near High Wycombe, Is another airfield frequently used for filming, partly because its hangars contained many aeroplanes of interest to filmmakers.  Doug Bianchi’s Personal Plane Services specialised in giving sympathetic maintenance to old, odd and one-off types.  ‘Aces High’ (the aviation version of ‘Journey’s End’) was filmed there in 1976 and the old farmhouse outside the peri-track, suitably war damaged, was the squadron HQ for the film.  A regular actor was one of the several modified Stampes, above right, who did battle with replica Triplanes and Camels.

One day the Stampe had its own reserved airspace at one side of the airfield and spent the day repeatedly diving, dozens of times, from different angles at one particular spot on the ground.  It transpired that it was performing for a clip of a fleeting few seconds in a TV advert for wallpaper paste.

Occasionally, owners of the rare and unusual types were invited to fly in an evening display (evening, because it was less likely to be windy).  Here are some.

Fokker Eindekker (the little box on the u/c produces smoke in dramatic moments).

Morane N – the original was very tricky to fly with sluggish wing warping and ultra-sensitive all moving tailplane and killed more pilots than the Germans did. The replica’s handling was more benign.

Manning Flanders – a 1910 design built by Doug Bianchi’s PPS for Alberto Sordi – the Italian pilot – to fly in the Mag. Men film.  Very heavy to fly but 'made a nice noise’. 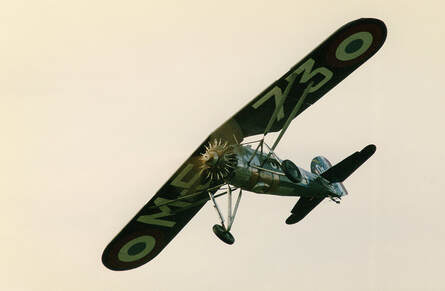 Between the wars French Air Force trainer, contemporary of the Tiger Moth and Stearman PT-17.  Stripped of its paint and in sparkling silver it featured as Lt Stachel’s nemesis in a stunning aerobatic display in ‘The Blue Max’, flown by Derek Piggott.


Pilots of early aeroplanes didn’t taxi much and if their did they found it difficult to cope with any kind of crosswind or uneven ground.  So Bleriot allowed his wheels to castor.  It’s not easy to see here but the field is sloping and the pilot has pointed the nose up-slope –to his left- and the Bleriot is crabbing along in a ‘straight’ line.  (He’s also fractured the authenticity of his replica by fitting ailerons instead of wing warping). 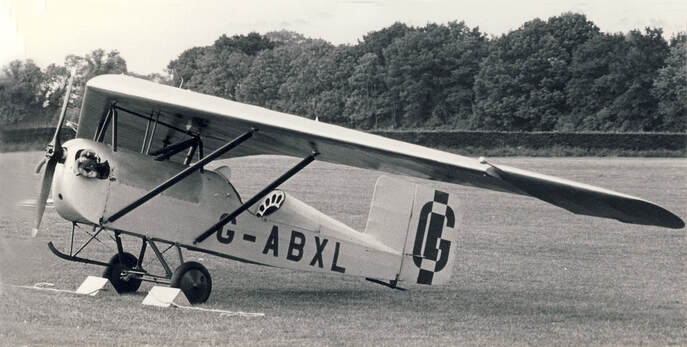 Inspired by the Westland-Hill Pterodactyl (in the 1930s) the Granger Brothers wanted to learn to fly.  So they designed (with help) and built this.  It flew quite well for a while then was stored.  In 1967 it was presented to  Shuttleworth, restored and flew again.  It was given back to the Granger family in 2002 but for the third time it’s under restoration and could return to Old Warden skies.
No taxying for the Deperdussin which is on its way to the take-off point.

The Popular Flying Association (since 2008 the Light Aircraft Assoc.) rallies were/are great events where you can get close to lots of lovely aeroplanes and the nice people who fly and build them.  Many of the rallies were conveniently at Cranfield.  These pictures were taken there in 1983.

The Chrislea Super Ace.  The original Ace, first flown in 1946, had an unusual control system.  A car-like steering wheel on the end of a horizontal column rotated naturally to roll left or right.  Move the whole wheel up and down to control the elevator and, here’s the tricky bit, from side to side to control the rudder.  No-one but the designer thought this intuitive, sales were miserable and the company went out of business.  The Super Ace survivors had rudder bars fitted and the control wheel made to work conventionally.
Back in 1931 the Arrow Aircraft company built a little biplane, the Active.  It flew in the 1932 King’s Cup.  In 1935 it was bought by young Alex Henshaw, keen to develop his aerobatic skills.  His father insisted that he should buy a parachute.  Dutifully, he did.  On a clear, cold December day he was practising the latest manoeuvre when the engine suddenly burst into flames. The parachute worked, the Active crashed and Alex bought a Mew Gull.   The Mark 2, built in 1932 with a more powerful engine is, appropriately, still Active  after a couple of rebuilds and here it is. 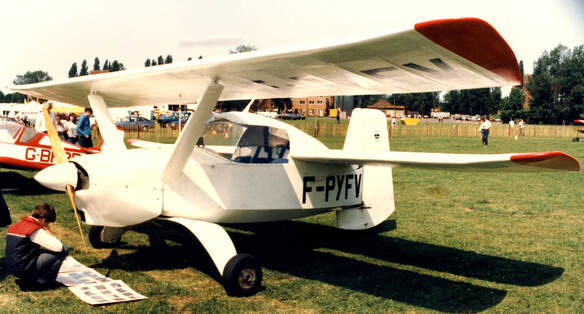 Remember Henri Mignet, of Flying Flea fame?  Well, this is not his work but that of one of his admirers, Emelien Croses.  It’s not a Flea but has the same layout - with the wings safely separated.

The wooden fuselage was replaced by metal stringers, fabric covered.  DH built four in England, 40 were built in Canada and 161 in the US. 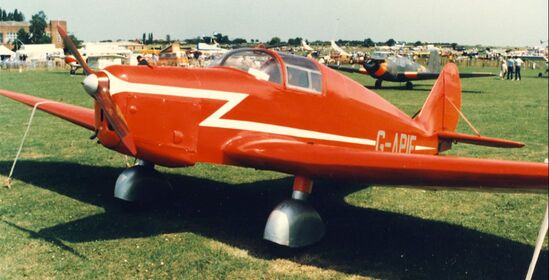 
E. O. Tips, the Belgian designer and builder of the first version of the Belfair, escaped in it to England in 1940.  Three were made in 1946. It had a splendid performance, twice breaking the world distance record for its class but it was too expensive to compete in the post war surplus market. 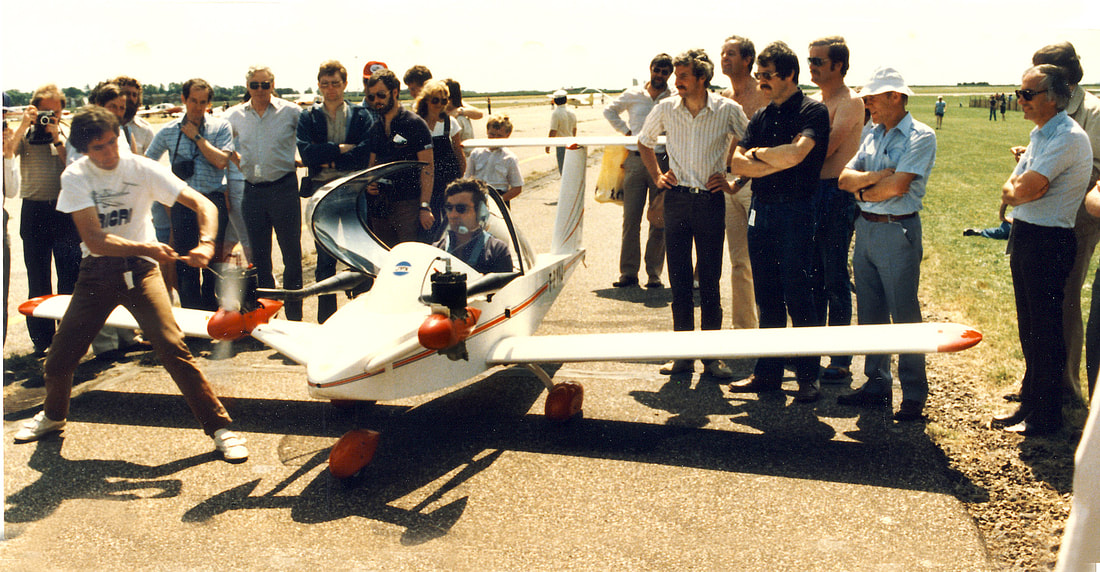 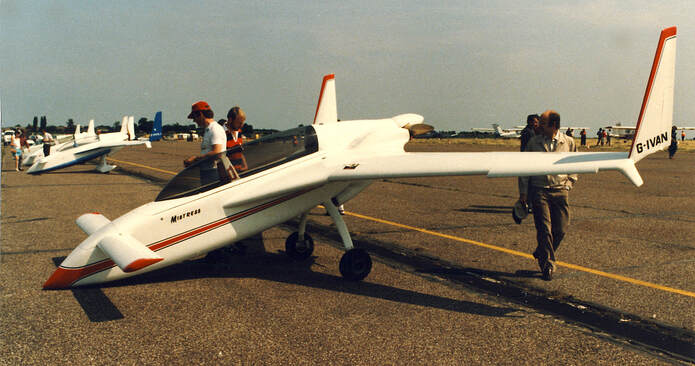 This belonged to Ivan Shaw who later fitted twin engines (75hp Hewland) buried in the wing roots.  With a retracting main u/c it cruised at 280 mph.  The nose wheel is retracted here to allow the pilots access to the cockpit.

(Ivan went on to develop the successful Europa light plane).
Not everything at a PFA Rally was a light homebuilt.  Here’s a Morane Saulnier MS 733, a French trainer which
the Cambodians used as a gunship.
Two years after all those pictures were taken, the PFA Rally was held at Wroughton, near Swindon.  One of the hangars there housed exhibits of the Science Museum which were not currently on display including . .

this Boeing 247D.  It was one of the (then) new breed of twin-engined metal monoplanes which were to transform airline travel.  Its main competitor was the Douglas DC-2 and both types competed in the MacRobertson Race in 1934.  The DC-2 was second (behind the Comet) and the Boeing third. 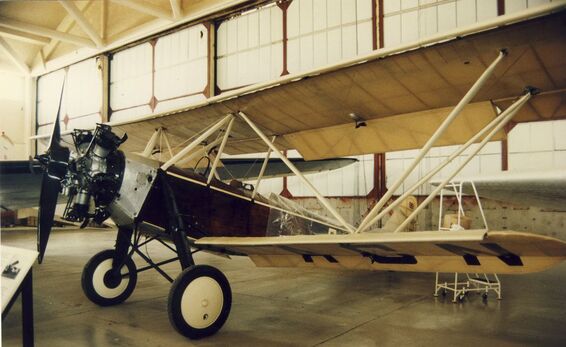 The one and only Handley Page Gugnunc, multi-slotted for its challenge to win the Guggenheim Safe Aircraft Competition in 1929, which it failed to do by just one point, much to the fury of Sir Frederick HP.

Out on the airfield were still airworthy craft, like this British Aircraft Eagle, a three seat tourer dating from 1934. Of the 37 built, this is the only one with a fixed undercarriage.
Shiny metal, silver painted fabric – both need plenty of polish time for a proper pre-flight.

The Czech Aero 45 (so-called because it seated 4/5) with twin 140 hp engines first flew in 1947 and proved to be a great success, setting several records.  It was also the first Czechoslovakian aeroplane to cross the Atlantic. 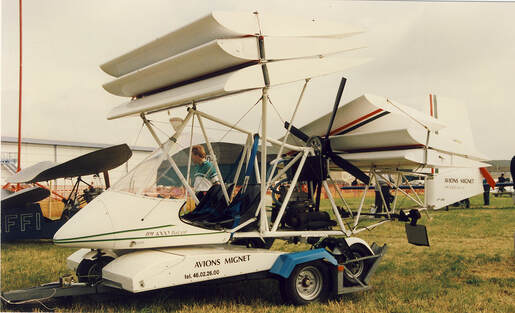 It looks as though there could be several aeroplanes on this trailer.  There’s only one, an HM1000 Balerit, a genuine product of Henri Mignet’s company - well, his son’s.  For a time, they were used by the French Army.  Does that make it a warbird?

Here it is, all untangled
and ready to go.

Not a paunchy Pitts, it’s a Christen Eagle II.  Sold in kit form it’s just as exciting as the Pitts to fly.

This Austrian motorglider, (it’s a Brditschka HB23 if you really want to know) proved the layout for the later RFB Fantrainer.  With a 650hp engine driving a ducted fan, it was a basic trainer used by the Luftwaffe and the Thai air force.

These two kitplanes, a Mustang and a Thunderbolt, look different but have the same basic structure.  With different accessories they could have resulted in a scale replica P-40, Hellcat, Spitfire or even a Corsair.

In his RAF career Peter Phillips was a member of aerobatic teams and performed many solo displays.  So when he left the service he was soon representing GB in international competitions.

He built the Speedtwin using modified wings of a Victa Airtourer attached to a steel tube fuselage, Chipmunk undercarriage etc. Powered by two 100 hp Continental engines its performance was outstanding.  He built a second, even better version which he planned to produce in kit form.  Unfortunately, it was not to be.  He was stricken by cancer and died in 1994, aged just 66.

A sad note on which to end.