The One Who Did Get Away 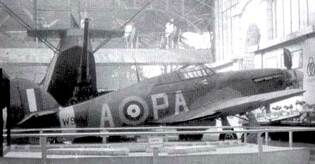 Whilst working in Germany for an aviation magazine, Richard Chapman came across a photograph of a Hawker Hurricane, taken in a Berlin museum during the war.  Checking its markings he found that it had been based at 55 Operational Training Unit at RAF Usworth, near Sunderland.  How had it got to Berlin?  Chapman co-operated with Roy Conyers Nesbit, ex-RAF Navigator, researcher and author, and a remarkable story emerged.
The French, too were reluctant to take the Czechs until the declaration of war in September.  Then, Přeučil was one of a group accepted by the Armée de l’Aire to join a fighter pilot training course at an airfield near Chartres.  Among the aeroplanes he flew were the Bloch MB 151 and the Morane-Saulnier MS 406.  He was not considered a good pilot and took no part in the defence of France during the German attacks in May 1940
The Czechs escaped to the UK and were absorbed into the RAF.  Most served with distinction.  But not Přeučil.

Enrolled as a Sergeant in the RAFVR he did an initial course with the other Czechs at RAF Cosford.  His first posting was in September 1940 to 43 Sqn at RAF Usworth near Sunderland, which was engaged in operational training.  In December, the next of a succession of brief postings took him to 605 Sqn at Tangmere.  At the time, 605 was being re-equipped with the Hurricane II and it is known that the Germans were seeking information on its performance but Přeučil was moved too soon to achieve anything.  He was shuttled around three different MUs for testing and ferrying duties until some time in mid 1941 when he appeared back at Usworth as an instructor with 55 OTU.

There is a record that on 27 July he force landed a Hurricane in a field because of mis-handling the fuel system and he was reprimanded for carelessness.  He is reported to have ‘led a sloppy life’ and been permanently in debt.  His last flight was on 18 September, 1941 and there is no hint as to why he chose this date.  Maybe he thought he had learned all he could, or possibly he believed that the net was closing in.  He took off for a dog-fighting exercise over the sea with a Polish sergeant pilot.  The Pole returned alone reporting that he had lost sight of the other Hurricane when it dived towards the sea.  Přeučil was listed as missing, believed killed and the Hurricane written off.

That evening a Hurricane landed near a Belgian farm in the Ardennes.  The farmer gave the pilot civilian clothes and hid him in the woods.  The next day he emerged from his hiding place and appeared to fraternise with a German searching party.  As a result, the farmer and another Belgian were immediately taken and shot, the farmer’s wife and another man imprisoned.  The Hurricane was recovered and ended in the Berlin museum.

Přeučil had shown his true colours. For whatever he had achieved he was rewarded with 10,000 Reichmarks and sent to Prague where he began work with the Gestapo.  At first this was largely administrative, producing lists of Czechs fighting against the Germans, but he often appeared as a smartly dressed civilian at the interrogation of shot down Czech airmen.  He made no attempt to conceal his identity, openly reminding them of occasions when they had met in RAF service and sketching out the background of the prisoner’s squadron, home base, CO’s name, etc.

Přeučil in 1947
Later, Přeučil was inserted into an internment camp which held Czech civilians and captured partisans and several people lost their lives as a result of his deception.

When the war ended he made no attempt to escape or hide.  He was arrested on 19 May 1945 and eventually tried by a People’s Court.  The charge was principally as a traitor to his country.  His betrayal of the Belgians did not help his case but it seems that his spying against the British was incidental.  Přeučil did claim that he had married an English girl during his time in the RAF, possibly to try to claim British citizenship, but there is no record of any such marriage.  Nor was his handler ever traced.