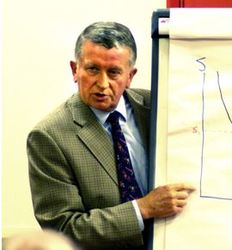 ​ At our September meeting we welcomed the return of Graham Perry, ex-RAF Engineering Officer and accident investigator.  His well-structured talk opened our eyes to the painstaking work of the accident investigators who, from widely scattered, severely damaged and often charred debris have to reconstruct the chain of events which caused the accident.  Two of the incidents he told us about demonstrate the investigative skills and logical analysis which produced results which were positive contributions to air safety.

In 1971 a BEA Vanguard crashed in Belgium.  It struck the ground almost vertically so the investigators were presented with a completely destroyed airframe.  However, the tailplanes were found some distance from the main wreckage.  Careful examination of the broken parts of metal can reveal the sequence in which cracks occur and the direction of stress at the time of failure.  The indications were that the tailplanes had failed, unusually, because of some pressure from within the structure and certainly not caused by any explosive device.
From the main wreckage parts of the rear pressure bulkhead showed evidence of a failure caused by corrosion – confining a large number of sweating humans who eat, drink, smoke and use toilets in a pressurised atmosphere can generate a highly corrosive mixture of nicotine tar and other noxious fluids in the bilges.  This corrosion led to a hole that allowed pressurised air to escape into the unpressurised rear fuselage.

​Thus the tailplanes became pressurised sufficiently to cause a rupture of their skin. This, in turn, allowed aerodynamic loads to break them off causing the Vanguard to pitch down in an uncontrollable dive.
As a result of the findings aircraft designers must now build in vents in unpressurised areas of the structure to allow any increased pressure to leak to the atmosphere.

Another accident investigation showed how everything is examined to see if it has any bearing on the cause.  In 1966 a Boeing 707 was diverted by bad weather from Tokyo to Fukuoka.  The following day, the cold front had cleared and on a brisk bright day the 707 left for Hong Kong.

​The pilot got clearance to take advantage of the weather and make a slight diversion to fly close to Mt Fuji so as to give his passengers a better view. At 16,000 ft he approached the 12,388 ft mountain from the downwind side.

​The strong 60-70 knot winds generated turbulence in the lee of the mountain.  The turbulence was severe enough to cause the aircraft to break up, shedding its engines and falling in a cloud of escaping fuel.

An 8mm cine camera was recovered from the wreckage and the film was developed.  This had the expected views of the mountain but the last few frames showed the inside of the cabin with a final black, over-exposed frame.  The investigators realised that the over-exposure was because the camera had jammed with the shutter open.
They obtained some similar cameras and tested them in a centrifuge to establish how much g would jam the film mechanism.  The tests showed that the 707 must have experienced at least 10g, sufficient to cause the fin to break off.  Next, one stabiliser broke off, then the engine pods separated from the wings, the fuselage split and the nose broke off.

Nothing could have prevented the complete break-up of the aeroplane in those extreme conditions.  (A US Navy Skyhawk sent up to search for wreckage after the accident recorded +9 and –4g, sufficient to alarm the pilot of this highly stressed fighter).  The accident highlighted the disastrous effect of severe lee-wave turbulence and the need for wider awareness of these potentially dangerous conditions in forecasting and flight-planning.