Experiences of a PR Pilot

by Ernest Hart
We’ve recently been exposed to tales of photographic reconnaissance in Wg. Cdr Mike Mockford’s talk and, of course, last year’s MKAS visit to Chicksands.  For me, they triggered off memories of an old friend, Flt Lt Jimmy Robson, who flew PR Spitfires from Benson.  I first met him in the early 50s.  He was CO of 31 Gliding School at RAF Usworth (where they now make Nissan cars) when I joined as a junior instructor.  He was a calm, patient man and an excellent instructor but he left us when the school was moved away to another airfield and we lost touch.

In 2002, a letter of his was published in Aeroplane Monthly.  I was able to contact him again and an interesting correspondence began during which I learned more about him than I’d ever known.  Sadly, it was soon cut short by his death at the end of 2003.  I still have his handwritten letters – and the painting he did of his favourite Tiger Moth.  But it is his PR experience which is pertinent.

Spitfires were converted for PR work as early as 1939, initially with one F.24 camera mounted vertically in a blister under each wing.  The first operation over Aachen on 18 November, 1939 was unsatisfactory. The cameras were moved to the rear fuselage and extra fuel and oil tanks  in the fuselage and wing leading edges were fitted. The armament was removed in most PR versions and heaters for the cameras and cockpit, plus extra oxygen were needed.

Various marks of Merlin were fitted and the breed was gradually improved in parallel with the development of the standard fighter variants, the most numerous being the PR XI, 470 of which were produced.
​ 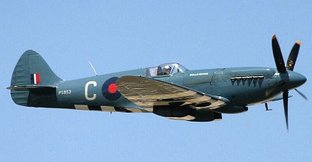 ​The ultimate PR Spitfire was the final variant - the unarmed PR XIX. The standard fit was two F 8 or F.24 cameras in tandem behind the pilot. These were mounted slightly off vertical so that two simultaneously taken photographs overlapped.  An oblique F.24 could also be carried. The power of its 2,035hp  Griffon 66 engine was absorbed by a 5-bladed prop giving a max ceiling of 42,000ft. Normal range was 1,160 miles, but a 170 gallon drop-tank extended this to 1,550 miles. ​
225 XIXs had been made when production ended early in 1946 and they stayed in PR service with the RAF until April 1954.

What follows are verbatim extracts from Jimmy Robson’s letters.

When I first flew a clipped wing Spit V I thought ‘I’ll do a loop’, picked up a little speed over the Mersey, pulled back and blacked out!  Came out of it at about 6000’.  For rolls, it was phenomenal.  Push the stick over and you rotated twice.

But I still say the Hurricane I was a gentleman’s steed.  The first one I flew (L1975) during a conversion course in 1944 was one of the first 600 delivered to the RAF before 1939.  It had been to France, then back for the B of B but, getting rather ancient it was demoted to conversion training.

It was a good example of two things; first, how our Danish resistance friends could give us valuable information and secondly, the advantage of a manoeuvrable Spitfire.

When I thought I would be over the Ruhr, I saw a glowing pink ball about a mile ahead and coming slowly towards me – new ack-ack weapon? No, it passed on my starboard side about 20 yards away, about the size of a big beach ball, but a few minutes later it dawned on me that if I was cruising at 360 mph it must have been going west to east at 340 mph.

About 1210  I saw a big black hole in the stratus.  Bingo.  It stretched from Oranienberg south to Berlin so I started my photo runs N – S, then S – N etc.  On my fifth run N – S I was amazed to see an Fw190 cross my path, same height, going W – E.  Being unarmed, I thought my best place was beneath him so I started a gentle turn to port to get under him.  Glancing back as I turned, I saw a triangular sectioned fuselage, dihedralled wings with a large jet under each wing, levelling out about a mile behind.  Thoughts – 430mph - 540 mph - cannon! 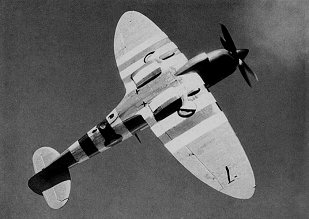 The gentle turn became a full throttle up and over dive into that stratus – I even heard him whistle past behind me as I disappeared.

So obviously a manoeuvrable a/c can avoid one trying to turn but needing more sky in which to do it. I stayed in the cloud for an hour until I peeped out to see if we were going in the right direction.

When I got back to Benson the ops. people enlightened me.  The Fw 190 had been a decoy.  They also suggested that my ‘pink ball’ had been a form of ball lightning.  They were much more interested in my photos.

My last ops. trip was on 8 May, 1945 [the last day of the war] in Spitfire XI PL 995.  I had to do a visual recce of Kiel Bay to see if there were any large ships.  High command was worried in case the Nazis were going to retreat into Norway for a ‘last stand’.  If there had been I had to radio Coltishall in plain English and they were ready to send Beaufighters over to sink them.  They needn’t have worried.  The only large ship was burning fiercely in Kiel harbour sending clouds of thick black smoke eastwards.
​​Dying may be the final task
Drink to me is all I ask.
Do not mourn me, do not fret
I was never on the internet.