​Bill Brown is a spritely 88 year old whose good memory and expressive delivery make him a pleasure to listen to.  He visited Cambridge Gliding Club at Gransden Lodge and told so many interesting tales that it is difficult to be selective. 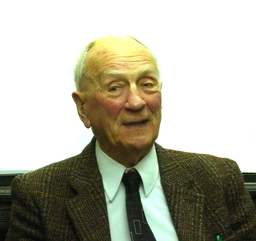 On applying to join the RAF at the outbreak of the war he was told to finish his engineering degree at Cambridge. In 1941 he was sent to the USA for his flying training, to what is now Edwards AFB in Southern California flying Stearman PT-17s.  Most of the instructors seemed to be Hollywood stunt pilots – ‘highly skilled pilots but unconventional’.

His own instructor was Bud Ernst, a nephew of Mary Pickford. One day he did a ‘forced landing’ and left Bill to ‘look after the ship’ whilst he walked off towards a farmhouse to get help.  Two hours later he returned and with no explanation, restarted the engine and flew home. Later, Bill learned that the engine had needed no attention - Bud had just been visiting a girlfriend.

Back in the UK Bill was posted to Inverness for training as an instructor and then found himself teaching army pilots to fly Hotspur gliders.  This included night flying allowing Bill to accumulate valuable instrument flying time which, he believes, helped on his application to join the Pathfinder Force.

​The formation of the PFF has been well documented.  ‘Bomber’ Harris fiercely opposed any elite force which he said would cream off the best crews and affect morale.  In the end he lost the argument and in July 1942 8 Group was formed under Don Bennett.  Bennett set high standards for his crews and personally addressed every newly-joined crew on their 2-week induction course.

Bill joined the PFF in November 1944 and was posted to Gransden Lodge, joining 142, one of the squadrons of the Light Night Striking Force flying Canadian-built Mosquito B.XXVs.  As well as target marking they also carried out diversionary raids to deflect attention away from the main force.

​Bill likened flying the Mosquito to driving a racing car, or riding a racehorse – tremendous performance but very sensitive and requiring the pilot always ‘to be ahead of the aeroplane’. He developed a technique to ensure a clean take-off.  With full fuel and bomb-load (as much as a 4000lbs ‘cookie’) safe take-off speed was around 170 knots.  ‘At the right time’ he’d give ‘a little dab on the brakes’ which compressed the oleos and the Mosquito rebounded into the air.
Just getting to the runway needed careful timing.  It took 3 minutes to taxi to the runway along a single peri-track and since the engines would overheat after just 5 minutes any congestion or hold-up had to be avoided.

He was very careful with his engines, cruising at maximum boost and minimum propeller rpm thus reducing the fuel consumption from 1.8 mpg to 2.4 mpg.  This 30% improvement was very useful if the weather on return to base caused a diversion to Scotland or Cornwall.  But it also reduced his cruising speed and often made him last back from an operation. Although he refused his ground crew’s offer to choose a name for his aeroplane they thought that he spent so much time wandering about the countryside it should have ‘Rambler’ painted on its nose.

On diversionary raids a group of Mosquitos would cruise at the height and speed typical of a force of Lancasters.  German radar was not good at working out numbers of aircraft in a formation so the defences had to be alerted and fighters scrambled. As soon as the presence of the main force became obvious, the Mosquitos could climb to safer heights and increase speed.

Bill explained that although they had no defensive armament and poor rearward vision they did have the benefit of a line of warning lights.  The first detected the normal ground based search radar.  Another picked up the transmissions of the flak predictor radar which equipped the larger AA guns.  When this came on it would take 90 seconds for the radar to calculate the Mosquito’s height and position.  Then it took another 90 seconds for the shell to be fired and reach the predicted height.  So Bill knew he had 3 minutes to act and ‘usually after Jerry had pulled the trigger’ he would turn 5° and descend 200 feet ‘using gentle control defection to avoid unnecessary drag’.  Further turns and climbs followed in a ‘sort of airborne chess game’.  Flak guns operating at lower heights than the standard German 88mm guns laid box barrages – no opportunity to play the avoiding game and all a matter of luck.

Night-fighters’ radar also showed on the warning panel starting another ‘game of cat-and-mouse’ with carefully timed turns, even climbing sharply and slowing to make the Messerschmitt 110 overshoot.  One of Bill’s navigators spoke fluent German and tuned his radio to the German night fighters’ frequency.  He then gave out conflicting instructions to confuse the defences.  This technique was effective and widely used.

At one briefing, Bill noticed three pretty WAAF officers in the room.  This was unusual and caused some speculation because security at the briefings was very high and only the crews and the ‘need-to-know’ senior officers were present.  It was the start of the next move in radio-confusion.  The Germans had introduced women controllers to counter the RAF interrupters and these girls were the first of the RAF’s counter moves.  They had an uncomfortable ride, up to 4 or 5 hours lying in the cramped nose on the bomb-aimer’s bench and having to shuffle aside when the navigator came in to drop the bombs or TIs.

Placing the Target Indicator flares called for precision navigation.  Ground markers would be dropped on the target but when the area was covered by cloud sky markers were placed at varying heights so that they could be seen by the approaching bombers. This needed a calculation to place them at the right distance before the target so that bombs aimed at them whilst falling at an angle would reach the ground in the target area.

Operations were frequent and pressure was intense.  One pilot went to Berlin twice in 24 hours. Although most pilots had their own ‘usual’ aircraft they were also used by other crews and Bill once noticed from his a/c log that it had done three ops in one night.  Early in 1945 the LNSF raided Berlin on 36 successive nights.

They flew throughout the winter in all kinds of weather.  One day there was a dense high-pressure fog, no discernible cloud base and visibility at ground level no more than a few hundred yards.  Flying was cancelled and the radio was silent.  Then Air Traffic reported the approach of a lone Beaufighter which landed and taxied in.  The CO and his staff rushed to meet the pilot because it was Don Bennett, flying alone and with no navigator.  He said ‘Well, gentlemen, I don’t think it’s too bad, do you?’ and within two hours, the squadron was taking off into the murk.
​
Bill acknowledged that he had an exciting life during his 45 ops with 142 Squadron.  He learned that working to a careful plan of all aspects of the operation made the flight itself ‘almost a routine technical exercise’. In the after-flight de-briefing he noticed that the crews with a less meticulous approach always seemed to be the ones who reported trouble with weather, flak, fighters etc.
​
His most enjoyable time was immediately after the war ended when he flew several ‘Cook’s tours’, low-level daylight sight-seeing flights.  He collected many photographs of damaged towns and, unlike on his previous visits, ‘nobody was shooting’ at him.