In the three years before his epic journey on 25th July 1909 Bleriot had built a series of aeroplanes.   Like all pioneer aviators, not only was he testing his designs, he was at the same time teaching himself to fly using whatever system of control he thought would work.
Early designers had no standard for control layout and it is to Bleriot’s credit that he adopted the later widely accepted practice of a foot operated rudder with a single central free moving control column – fore and aft movement for pitch, sideways for roll.  That final statement needs some elaboration.

The first attempts to produce a flying machine paid little attention to ‘roll’.  Instead, designers usually tried to build in some form automatic stability in an attempt to keep the wings level whilst they struggled to find the right formula and power just to get the thing off the ground first.  Turning, when they got round to it, would be handled by the rudder.  So when early flights saw daylight under the wheels any turns, or corrections of unwanted deviation from straight flight, were tentative skidding manoeuvres.

The Wright brothers had adopted an entirely different approach though reports of their flights in 1903 had been received in Europe with some scepticism.  In 1908, they decided to put more energy into showing off their Flyer (by now a well-tried 5 year old design).  Wilbur brought his plane to France and astounded all the sceptics with his skilful handling and confident banked turns.  Bleriot was at the Le Mans demonstration and spent some time talking to Wilbur.  He learned that the Wrights had avoided trying to build in stability, in fact they deliberately made their aeroplanes unstable and worked out effective controls in 3 axes, pitch, roll and yaw.  In the process, they had experienced – and managed to overcome - adverse yaw. (Here comes a slightly technical bit).

The brothers used wing-warping, which increased the angle of attack on one wing to give it more lift and the aeroplane would roll.  But they found that, in practice, it often made the wing drop instead.  The cause was drag.  Generating more lift produces more drag.  So twisting the wing’s trailing edge downwards to increase lift also drags the wing backwards, thus reducing both its airspeed and therefore its lift.  In other words, trying to roll to the left caused an unwanted yaw to the right – adverse yaw.

The Wrights worked all this out and even connected the rudder to the wing warping control so that it automatically corrected the adverse yaw.  They made it work on their gliders even before they built the 1903 Flyer.  Bleriot was impressed and he abandoned his experiments with ineffective rotating wingtips.  His next aeroplane, the Model XI, was built with wing warping, though without the automatic rudder correction.
​
Adverse yaw was ever present for early aeroplanes and it hasn’t gone away.  All through WWI pilots learned to turn with plenty of rudder and ‘help’ the turn with a bit of aileron.  When Geoffrey de Havilland designed the Moth in the 20s he tried to reduce adverse yaw with differential aileron movement.  Watch a Moth or Tiger pilot check his controls and you’ll see that the down-going aileron (that’s the one which produces the greater drag) moves through a very small angle whilst the up-going aileron really travels a long way.   Any extra drag from that does help the roll. 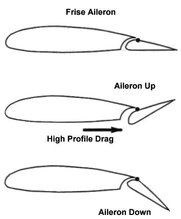 ​In the early 30s, Leslie Frise, an engineer with Bristol, designed a new method of hingeing the aileron at the top of its leading edge.  When it moved up, its nose stuck down into the airflow and produced extra drag to counteract adverse yaw.  It’s such a successful answer that it’s now almost universally fitted and modern pilots don’t have to pedal their way through the sky.

But in a slow aeroplane where the control surfaces need relatively large movement then adverse yaw could become noticeable.  More significantly, gliders get their performance from avoiding drag and Frise ailerons are out.  Some differential movement helps but with those long wingspans any drag at the tips has the nose swinging in the wrong direction if the rudder isn’t kept busy.  Check any glider and you’ll find a piece of red wool taped to the canopy in front of the pilot’s eyes.  If that isn’t blowing straight, the glider is yawed – caused by drag – and needs frequent foot-dancing corrections.​
In the Shuttleworth hangar there’s an original Bleriot, warping wing and all, which is flown in suitable conditions.  How do today’s post-Frisean pilots cope?  Eventually, very well, but the training is thorough.  There’s plenty of film evidence of wing-scraping and ground looping and there was a time when Bleriot flying at Old Warden was almost abandoned.  The adverse yaw caused by wing-warping is most severe at slow speeds - well, all Bleriot speeds are slow but take-off and landing are the dodgy times.  Current practice is that any wing-drop must not be corrected with wing-warping.  It is safer to use opposite rudder to speed up the downgoing wing and give it that extra lift it needs. And even though Bleriot did fit a castoring undercarriage cross-wind take-offs and landings should be strictly avoided.

Next time there’s a Shuttleworth flying evening, enjoy the wonderful spectacle of the old Bleriot puttering across the field and the circuits of the other wing-warpers, the Blackburn and the Avro Triplane.  Respect the skill of the pilots who handle these priceless machines and pay even greater respect to Louis who, on the strength of having just completed a flight of 36 mins 55 secs which was enough to set a European duration record had the confidence to launch himself across the Channel in his delicate and marginally controllable Type XI.

He deserved the Daily Mail’s £1000 and his subsequent fame.

Oh dear!  Reading about adverse aileron yaw took me right back.  Not quite to Bleriot’s time, but roughly half way, namely to 1957 when ETPS was at Farnborough and I was desperately trying to look as if I understood the words of wisdom coming from the aerodynamics science tutor.  “Unlike longitudinal stability, lateral and directional stability cannot be taken in isolation.  Yaw always induces roll, and roll leads to yaw.”  These simple statements influence control effectiveness and are fundamental to the phenomenon of dutch rolling experienced on most aircraft.  All the aircraft I have tested suffered from it, but in different proportions.

The Meteor produced very little roll with yaw.  When a yawing disturbance occurred the phenomenon was observed as a yawing oscillation or ‘snaking’ manoeuvre with very little roll: a low roll to yaw ratio. The Hunter, in contrast, was markedly different.  A small yaw produced a powerful rolling effect - a high roll to yaw ratio - especially at the lower airspeeds. This was caused because the sideslip generated by the yaw made the into-wind swept wing a more efficient profile.  It was surprising to me that this had not been known by the designers, because my rubber powered model of 1942 had both dihedral and moderate sweepback to improve its lateral stability.

This high roll to yaw ratio was used to great effect when the aircraft was flown in manual. ie with power controls inoperative.  It then took two hands on the stick to move the ailerons, but a small push on the appropriate rudder pedal readily produced the desired amount of roll.  Hunter pilots quickly learnt that this was the easiest way to fly the aircraft in manual.

The solution for a swept wing aircraft was anhedral, as seen on the Harrier (and the F.104 Starfighter).  This produced the interesting effect in conventional flight that when rudder was applied up to about 300 kts IAS the aircraft rolled at a slow rate in the expected direction.  At higher speeds it rolled slowly in the opposite direction.

However, in jetborne flight, the Harrier's conventional control surfaces were ineffective and yaw and roll control was produced by the reaction of high velocity air ejected from ports in the rear fuselage and the wing tips.  Hence, at airspeeds from about 50 to 90 kts the resulting sideslip created by yawing could be catastrophic.  The rolling moment developed by the into-wind wing even at these low speeds could suddenly become more powerful than the roll reaction control.  A number of aircraft were lost as a result. It was difficult to establish the boundaries in this part of the flight envelope.  We started with the simplest indication of sideslip: a length of string glued to the nose of the aircraft in front of the windscreen, as all glider pilots had used for decades.  Eventually this became a wind-vane on a short post for production aircraft.
​Investigating the roll to yaw ratio is an early exercise in the test programme of a new design.  It involves flying over a wide range of speeds and heights carrying out ‘turns on one control’.  First, with the stick left free, rudder is slowly applied progressively and the ensuing sideslip and roll rate measured.  The aircraft generally enters a spiral dive before recovery is made.  This is repeated, but this time the pilot uses the stick to keep the wings level.  The ratio of stick movement to rudder application gives an indication of the power of each control.  Also, the force required on the rudder pedals indicates the degree of aerodynamic balance of the rudder. Indeed, because it is feasible that the rudder might overbalance at the larger angles or lead to fin stall with possible disastrous consequences, this exercise has to proceed with great caution.  The Halifax was an example of the former, and the Meteor of the latter.

The programme is repeated but this time the rudder is left free while aileron is applied and the degree of adverse aileron yaw and sideslip is measured.  It also gives an indication of the rudder ‘float’ with sideslip.  As the bank of the aircraft increases in the ensuing spiral dive, sideslip develops, increasing the lift on the lower wing, possibly sufficient to stop the roll or even reverse it.  Finally, the exercise is repeated with the rudder held fixed.

On completion, a good indication of the lateral and directional stability and control is revealed.  What happens with the Eurofighter Typhoon I hear you ask.  It’s all very easy.  The flight computer ensures that the various controls, including the wing leading edges, are moved appropriately to ensure that adverse aileron yaw and the consequent drag increase is kept near to zero.