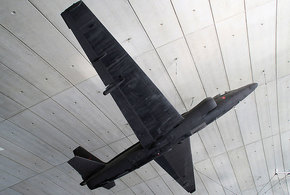 The answer to one of the monthly Newsletter's
Recognition Challenges has prompted this sketchy
look at some of the events in the life of the U-2.
The model at Duxford is the 19th production
aircraft, and ​was active from 1956 to 1992.


​
Conceived in the early days of the Cold War it was the answer to the problem of finding out what was going on in the Soviet Union.  The US Air Force’s best reconnaissance aircraft was the B-57 Canberra which could reach 64,000 ft, no longer high enough to be safe from missiles.  A small group of companies were invited to submit designs that could reach 70,000 ft.  Lockheed had not been invited but Kelly Johnson thought his Skunk Works could do it.  He proposed taking the fuselage of the existing F-104, making it shorter it and replacing its tiny wings with long glider-like 80 ft span main planes.  To keep the weight down he would remove the undercarriage and land on a skid a la Me-163. ​
At the operational ceiling of 70,000 ft the maximum permitted speed was only 10 knots faster than the stalling speed, a narrow range known as ‘coffin corner’.  Sensitivity to any CG movement called for a special camera design.  It was loaded with a mile of thin film which weighed 300 lbs.  Rolling this across the camera from one reel to another would move the centre of gravity outside limits so the film was passed around a second roller then returned to a third roller alongside its original position.

Maintaining the delicately balanced flight meant that control movements had to be small and sensitive.  The controls were unpowered (‘hydraulics are heavy’) so at lower altitudes the pilots found that to make them effective required a great deal of strength.  This made the landing interesting.

To save weight, a bicycle undercarriage was used - the skid idea was soon abandoned because it would have led to too many airframe repairs.  The main weight is taken by twin wheels on a single main leg fitted ahead of the CG.  Small twin tail wheels provide the only steering control – there is no differential braking.  This makes the U-2 very sensitive to cross winds and it has to touch down preferably on both wheels together.  With poor controls and a slow flying speed any main wheel bounce would be uncontrollable.  (The Boeing B-47 had a similar u/c layout and one of the co-pilot’s pre-landing duties was to calculate the weight of the aircraft to determine the correct touch-down speed).  As a single-seater the U-2 needs outside help.  Whilst the pilot ‘wrestles his way to the landing’ another qualified pilot in a powerful chase car follows down the runway and provides assistance - ‘two feet . . . right rudder . . .one foot . . . six inches’. 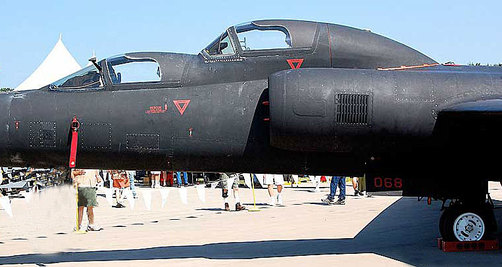 ​When the U-2 slows to a stop, one wing-tip falls to the ground.  A crew, usually two or three hefty chaps, run forward to dangle from the upper wing whilst a crew member plugs in one of the ‘pogo’ wheels under the other wing.  (You can find several film clips of all of this on the internet).


Fifteen years into the U-2’s life, five two-seat U-2s were built.  Then trainee pilots, with an experienced instructor aboard as monitor, were required to do one ‘just-in-case’ landing without chase assistance.
70,000 ft was expected to be safe enough from surface-launched missiles though it would still easily be reached by radar.  Unpainted U-2s could be seen glistening in the sun so they were painted matt midnight blue.  At one time, they experimented with a metal grid on the underside, covered with black foam rubber to dissipate radar.  Another test, named Dirty Bird, used a forest of metal posts connected with wires set at a precise distance from the skin.  Occasionally, wires snapped and flailed about.  Performance was so seriously affected that the U-2 couldn’t get to its operating height.  Both ideas were abandoned.

The CIA’s weak cover story was that the aircraft were being used by NACA for weather research.  The first overflight across East Germany and Poland was on 20 June 1956.  The Soviet borders were first crossed on 4 July 1956.  The flight was tracked by radar and several Migs were launched but failed to get near the U-2.

If they had been intercepted or forced down by mechanical failure, pilots carried an ‘L’ pill containing potassium cyanide.  One pilot accidentally popped the L pill in his mouth instead of his favourite sweet.  He was always known afterwards as the ‘Lemon Drop Kid’ and the L pill was carried more safely in a little box.  It wasn’t until 1960 when the CIA realised that the pill would work just as effectively if it were accidentally broken in the cockpit that they were withdrawn. 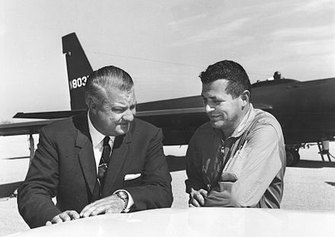 Detachments were set up in Turkey, Pakistan (from where two RAF pilots took part) and Alaska.  The pattern of overflights, diplomatic protests and indignant denials continued until 1 May 1960.  On that fateful day Francis Gary Powers took off from Pakistan on his 28th mission.  It was unusual in that he planned to cross Russia and land in Norway.

It was also unusual in that it was May Day, a Russian public holiday, on which there was much less air traffic than usual.  The U-2 was detected even before it crossed the border and tracked for 4½ hours.  Powers was flying at 70,500 ft.  Several Migs climbed to intercept and a missile battery fired three SA-2 missiles.  One detonated behind and damaged the U-2, another destroyed one of the Migs and killed Lt Sergei Safronov. 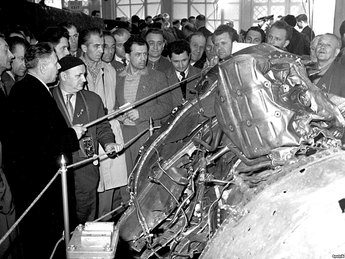 The tailless U-2 began spinning, upside down and nose pointing upwards.  Powers couldn’t use the ejector seat so he forced open the canopy and was immediately​sucked out, descending by parachute after the broken parts of his aircraft.  He was well aware that the Russians already knew about the U-2 and took his counsel’s advice to apologise to the Soviet state.  His 10 year sentence ended after 18 months when he was exchanged for Rudolf Abel, a convicted Russian spy.


​
It was the end of Russian overflights but the U-2 was very active elsewhere.

The situation in Cuba was being closely watched by both the CIA and the USAF.  Overflights began in 1960 and two years later, Soviet ICBMs were found, sparking the Cuban Missile Crisis.  On 27 October 1962, another U-2 was to have a fatal encounter with an SA-2 missile.  Major Rudolf Anderson died when he crashed in Cuba.  The remarkable outcome of the accident investigation was that when the missile exploded behind the U-2 a piece of shrapnel punctured Anderson’s pressure suit and he died of hypoxia.  There was another unusual event on 28 July 1966 when Capt Robert Hickman left on a mission which was meant to avoid entering Cuban airspace.  Trouble with his oxygen caused him to lose consciousness. An F-4B was launched to intercept the U-2 and, if necessary, to shoot it down if it approached too close to Cuba.  It couldn’t be caught and it flew on, across Cuba, eventually to run out of fuel and crash in far-off Bolivia.

Asia had its share of U-2 scrutiny.  Apart from extensive use of U-2 by the Taiwanese, the USAF and CIA used detachments in Japan, the Philippines and Thailand to monitor events over and around China, Vietnam, Indonesia and the French atomic tests in the Pacific,  For potential wider-ranging involvement, the US Navy developed a tail-hooked U-2 for carrier operations.  That must have been interesting to see an aircraft so difficult to land normally on a runway being thumped onto a carrier’s deck.  In the event, little use was made of this hard-earned capability. 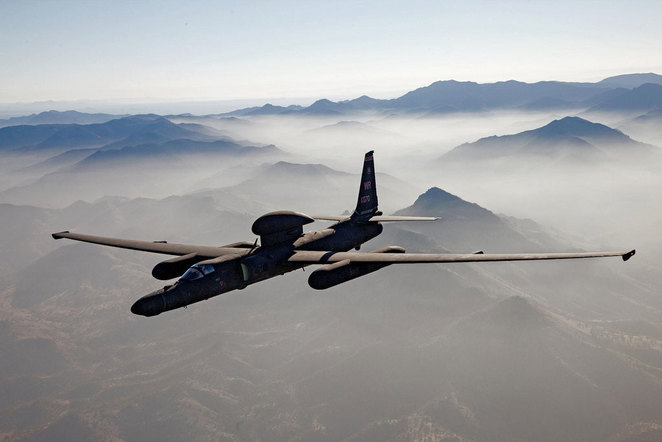 It is the effectiveness, both in results and cost, of the U-2 in its various forms which has made it outlive the SR-71 Blackbird and defy attempts to replace it by satellites and drones.  Its long-rumoured retirement has yet to happen.

The most likely replacement, currently scheduled to take over in 2019, seems to be the unmanned RQ-4 Global Hawk, but this is having a long and very expensive gestation period.  For most of its customers the U-2 continues to be the preferred choice.
Lockheed insists that its U-2 could still be effective –and cheaper – for years to come, even as far ahead as 2045.