Zeppelin!  The mere word conjures up a range of images and emotions.  It burst upon the British public as a peril from the skies – a killer of defenceless, innocent women and children, roaming through darkness and clouds with arrogant immunity, the pure embodiment of the frightfulness of the Hun.  Even when they had been driven off and the war was over, Zeppelins (and airships like them) remained a threat to their crews, so many of whom perished in the inevitable funeral pyre of tangled wreckage.

And yet – look beyond the terror and the failures and there is much to be admired.  From their very beginning, they demonstrated a remarkable achievement 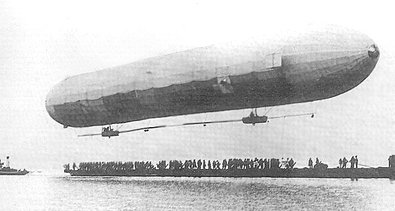 ​At the time when the Wright brothers were just starting their gliding experiments Count Ferdinand von Zeppelin’s first airship was ready to fly.  On 2nd July 1900 the 420 ft long LZ-1 emerged from its floating shed (floating, so that it could be aligned with the wind) and made its first flight.  A series of developments followed and in 1909, Zeppelin founded the first airline, DELAG, offering ‘cruises’ to passengers.  By August 1914 1588 flights had carried 10,197 fare-paying passengers.
​ 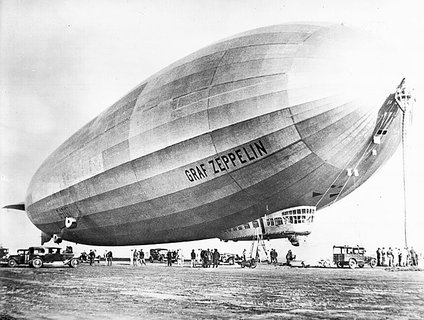 ​​In the post-war period, airship development produced notable successes.  LZ-127 Graf Zeppelin, expertly piloted by Dr Hugo Eckener, crossed the Atlantic in 1928 and completed a round-the-world tour in 1929.  A polar expedition and two round trips of the Middle East followed and then, for five years, the Graf Zeppelin ran a scheduled passenger, mail and freight service between Germany and South America.

Of course, other airships suffered well publicised failures, emphasising the fragility of the huge, light structures filled with flammable hydrogen.  It all came to a horrific conclusion on 6th May 1937 with the Hindenburg disaster.
Nevertheless, the lure of lighter than air flight continued to prove irresistible and helium has made it safer, if not more practical.  Today, Zeppelin NT (Neue Technologie) still produces airships, rather smaller than the Hindenburg, and they are available to be enjoyed by pleasure seekers at Friedrichshafen on the Bodensee (Lake Constance).  So, when the Transport Trust organised an expedition there in 2006, two AEG members were quick to take advantage
The Libelle (first flight - 1921) gave scale to the curved ceiling – actually a small section of the Hindenburg’s hull.​The small staircase (just visible in the far corner) was the entrance to the museum proper and led to a replica of the Hindenburg’s lounge, with a viewing terrace beyond
Part of the hull’s interior, rather simplified, with a line of fuel tanks.
From the streets of Friedrichshafen we got our first view of the Zeppelin, returning from a cruise over the Swiss mountains.  Even when the subdued vacuum cleaner noise became audible, the locals were so used to it that they didn’t even look up. 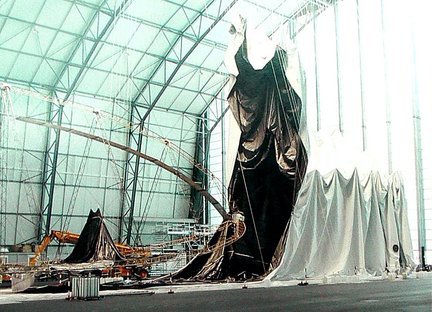 ​The ‘New Technology’ airship is a semi-rigid with 13 carbon fibre triangular frames attached to 3 aluminium longerons.  Internal separate gas cells are not used.  The whole structure is fitted inside a long sausage skin, a laminate of three layers, a gas-tight layer, a polyester fabric layer to provide stability and an outer polyurethane layer which welds all the layers together.  The helium is kept at a slight over-pressure to maintain the form and there are air-filled ballonets to control the pressure and trim at altitude.

The whole 246 ft long structure weighs just 2,200 lbs and has a volume of 290,500 cu. ft, really quite small in airship terms.  It’s powered by three 200hp Lycoming petrol engines.  (The Hindenburg was 804 ft long and powered by four 1320 hp engines).
Soon the airship approached.   It was a re-fuelling stop and the ground crew hung weights on the side of the gondola to give it better anchorage.
The mobile mast was driven up.  A ladder-climber, suitably harnessed, climbed up to attach the re-fuelling hose to the nose.

​At long last, it was our turn.  There was no breeze and the airship was held on the ground by the two forward props pointing upwards (they can move from 30° downwards to 120° upwards).  Holding the airship was a minimal ‘mooring mast’.  Or was he was just keeping the handling rope tidy?
Notice the plastic film lettering on the side of the airship.  It had been put on overnight and was on one side only.  Maybe it stretched the advertising budget of the Sparkasse Bodensee to its limit.

We strapped in.  There was a slight increase in engine noise and - levitation occurred.
At the rear of the gondola was a wide picture window with a bench seat for relaxed viewing.  The window in the door had a fold-down section for the curious to stick their heads out of the open window of a passenger aircraft in full flight.
The pilot sat comfortably before his expansive view, his fingers resting lightly on the sidestick controller.

​Prominent on the instrument panel is the altitude management system showing the pressures of the helium and the ballonets.  The engine controls include the important yellow swivel control levers.
It’s a marked contrast with the traditional control room of earlier Zeppelins. 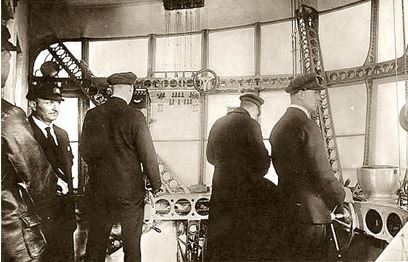 ​There was a long gap after the end of the era of the earlier Zeppelins.  The Hindenburg’s sister ship, Graf Zeppelin II was scrapped in 1940.  In 1963, the first of the Goodyear non-rigid airships appeared.  They were widely used for advertising and limited passenger flights.  In the UK, Airship Industries tried hard and showed what a tough business it is.

Zeppelin NT was founded in 1993, taking  advantage of a trust fund, strictly for airship development, left over from the original company.  The first NT prototype flew in September 1997.  After minor modifications, it was christened Friedrichshafen by Count Zeppelin’s granddaughter and shown to the world at the Paris Air Show in 2001.
Steve Fossett saw a record-setting opportunity and hired Friedrichshafen to set a class world speed record over I kilometre of 69.5 mph.  The ship was sold to De Beers who used it successfully to prospect for diamonds in Botswana.  Flying at night in calm air it provided a stable, vibration-free platform for sensitive gravity field measurement equipment.  Sadly, in 2007, when moored to its mast, a whirlwind damaged it beyond repair.