On the 16th of April (2012) it will be the 100th anniversary of the first flight across the English Channel by a woman.

Harriet Quimby was a reporter on Leslie’s Illustrated Weekly, a top New York magazine which devoted an entire edition to the new sport of aviation.  She was assigned to cover the Belmont Park air show in 1910 and there she met John Moisant, a daring young aviator.  For many of the early pilots, even those in the USA, the English Channel seemed to be a powerful magnet and Moisant was no exception.  It was in August 1910, only a month after he learned to fly, that he took off from France in a strong westerly wind and flew to England becoming the first pilot to cross the Channel carrying a passenger, his mechanic, Albert Filieux.  For good measure, he also brought along a cat called Madamoiselle Fifi.

Harriet was dazzled by aviation and, being already the owner and driver of a car and a strong campaigner for women’s rights, she determined that would learn to fly.  But she soon found that the men who ran flying schools were very reluctant to train any woman.  Sadly, before she could approach John Moisant to teach her he was killed when he was thrown from his crashing aeroplane. However, she had become friendly with his sister, Matilde, and together they persuaded another Moisant brother, Alfred, to teach them both to fly.  Thus it was on 1 August 1911 that Harriet became the first American woman to be granted a licence, FAI No 37.
Conscious of the need for publicity to overcome prejudice and to establish her flying career, she joined the Moisant International Aviators exhibition team, dressed fetchingly in plum-coloured satin blouse, bloomers, laced boots and goggles.  The press dubbed her ‘the Dresden China Aviatrix’.

For extra impact, Harriet looked to the English Channel and saw that another first was still waiting to be claimed.  Determined to be the first woman Channel-crosser she made her plans in secret in case another woman should forestall her.  However she was canny enough to sell an advance on her story to the Daily Mirror.  She ordered a new 70 hp Bleriot XI but, when she got to France it wasn’t ready so she persuaded Bleriot to lend her a 50 hp model.  This was quietly shipped to England – Harriet preferred to approach the lower cliffs of France than the white cliffs near Dover.

Helping in the preparations on that morning of 16 April 1912 was Gustav Hamel who made his name by flying the first airmail from Hendon to Windsor.  Just a few days before he had stolen some of Harriet’s thunder by crossing the Channel with a Miss Trehawke-Davis as passenger. Now he offered to fly across again dressed in Harriet’s distinctive clothes, landing where Harriet would be waiting for a quick-change deception.  She firmly rejected the idea.  More practically, Hamel lent her a compass and taught her how to use it.  Incredibly, this would be her first flight in a Bleriot.

Harriet wrote ‘The sky seemed clear, but patches of cloud and masses of fog here and there obscured the blue.  The French coast was wholly invisible, by reason of moving masses of mist.  The wind had not come up yet. The smooth grounds of the aerodrome gave me a chance for a perfect start.  I heeded Mr. Hamel's warning about the coldness of the channel flight and had prepared accordingly.  Under my flying suit of wool-back satin I wore two pairs of silk combinations, over it a long woollen coat, over this an American raincoat, and around and across my shoulders a long, wide stole of sealskin.  Even this did not satisfy my solicitous friends. At the last minute they handed up a large hot-water bag, which Mr. Hamel insisted on tying to my waist like an enormous locket.

‘It was a cold five-thirty a.m. when my machine got off the ground.  The motor began to make its twelve hundred revolutions a minute and I put up my hand to give the signal of release.  Then I was off.  The noise of the motor drowned the shouts and cheers of friends below.  In a moment I was in the air, climbing steadily in a long circle.  I was up fifteen hundred feet within thirty seconds.  From this high point of vantage my eyes lit at once on Dover Castle.  In an instant I was beyond the cliffs and over the channel.  The thickening fog obscured my view.  Calais was out of sight.

‘The distance straight across from Dover to Calais is only twenty-two miles, and I knew that land must be in sight if I could only get below the fog and see it.  So, I dropped from an altitude of about two thousand feet until I was half that height.  The sunlight struck upon my face and my eyes lit upon the white and sandy shores of France.’
She recognised no landmarks.  After 69 minutes in the air, by which time the ‘hot’ water bottle was more like an uncomfortable ice-pack, she landed on the beach where she was enthusiastically greeted by local fishermen.  Eventually, the press pack waiting at Calais arrived and her achievement was duly recorded in champagne, words and pictures.

The flight was a success, but the hoped-for publicity was a disaster.  As the journalists’ stories were being filed the overwhelming news came in that the Titanic had sunk the day before and Harriet’s story was relegated to the inside pages.  And even when she got home her triumph was over-shadowed by a march of 20,000 suffragettes which had not endeared New York’s male leadership to women’s achievements.

Harriet pressed on.  Her new 70 hp Bleriot had arrived and her manager planned a seven day event near Boston where the ‘Queen of the Channel Crossing’ would be paid the astronomical sum of $100,000.  On the last day of the event, she would fly the mail to New York.  The Bleriot was not well trimmed and a sack of sand was strategically roped in place to maintain the balance.  Her manager, William Willard, asked if he could join her for a flight.  He was no lightweight and added considerably to the load.  Always careful with preparation for flight Harriet had said, “Only a cautious person, man or woman, should fly.  I never mount my machine until every wire and screw has been tested”.  At this time seat belts were not used in aeroplanes and she warned Willard not to move around.  They took off successfully and climbed over Boston harbour.  Then, during a turn at 1500 feet, the nose dropped sharply and Willard was thrown from the plane.  She appeared to regain control briefly then the Bleriot pitched forward again and Harriet, too, was thrown out.  Both fell into the harbour and were killed instantly.  Ironically, the Bleriot righted itself and drifted down to land on the mud flats with minimal damage. 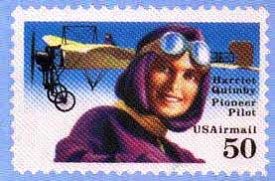 However, she has not been forgotten. There are two memorials to her – in Manistee County, Michigan, where she was born and at Squantum, Massachusetts, where she died.  She is still celebrated as America’s First Lady of Aviation and there is some speculation that the Bleriot flown regularly at Old Rheinbeck (America’s nearest equivalent to Shuttleworth) might have been hers.