André Ruinart, the head of the House of Ruinart which produced fine blanc de blanc champagne, was an enthusiast of the new sport of aviation.  In 1909, he offered a wonderful prize of 12,500 gold francs (that would be £33,000 in today’s money) for the first cross-Channel flight.  Who won the prize and where would you find his memorial?

The immediate answer to the question would be Louis Bleriot and you can have a little glow of satisfaction if you placed his memorial as a small group of granite blocks, sunk into the turf just north of Dover castle.

But, of course, you’d be wrong on both counts.

Although the 12,500 francs Ruinart Prize was not his prime motivation Louis beat all rivals and flew his monoplane from Sangatte to Dover on the 25th July 1909. He applied for the prize, but he didn’t win it. The rules required him to register the date on which he planned to fly and this Louis had failed to do. He was consoled by receiving the £1000 put up by the Daily Mail and Ruinart’s 12,500 francs remained unclaimed.

It wasn’t until 21 May the following year that the paperwork was properly filled in and another Bleriot monoplane landed at Dover to claim the prize. It was flown, not by Louis, but by Count Jacques de Lesseps.

De Lesseps – that name rings a bell. Yes, it was Ferdinand de Lesseps who formed the company which built the Suez Canal. After this triumph he had a less successful go at building the Panama Canal before being beaten back by tropical diseases.  De Lesseps married twice and had a total of 17 children!  Jacques, the penultimate of the brood, was born in 1883 when his father was 78.
He overshot his chosen landing spot and the next convenient area was a farmer’s field. He was given a mixed welcome, greeted first by two ladies ‘with true British hospitality’. However, the farmer reckoned he had caused damage worth £4 to the crop – which Jacques promptly paid. He had been expected and a crowd soon collected. They found him changed into a dark frock coat and trousers and white muffler. C S Rolls also turned up. He was nearby, preparing for his own cross-Channel flight – a non-stop double crossing which he did two weeks later. De Lesseps became an instant star. He earned the Ruinart Prize of course, plus £100 from the Daily Mail and invitations flooded in for him to appear at air shows in Europe and North America. 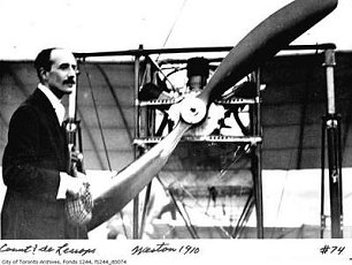 Jacques became the first pilot to fly round the Statue of Liberty, probably fitting since it was his father who had presented the statue to the USA in 1884 when Jacques was just a year old. Whilst in Canada he broke away from the planned demonstration flights around an aerodrome and made an unscheduled 49 minute flight over downtown Montreal, which caused a sensation. Flags were waved and there were cries of ‘Vive le Comte’. Subsequently, he was elected as an honorary member of the Mohawk tribe.

A couple of weeks later, he met Sir William Mackenzie, President of the Canadian Northern Railway. He made a big impression on Sir William’s three daughters and Grace became the first Canadian woman to fly as a passenger in an aeroplane. The following year, 1911, Grace and Jacques were married.

When WWI broke out de Lesseps immediately joined the French military and rose to
command a bomber squadron winning the Croix de Guerre and the Légion d’honneur plus a Distinguished Service Medal from the US. 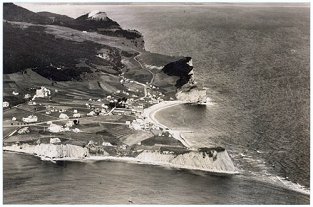 In October 1927 he and his mechanic, Theodor Chichenko, took off on another survey flight in threatening weather. They disappeared. The wreck of their aeroplane was found in a few days but it wasn’t until December that de Lesseps’ body was washed up on the coast of Newfoundland. In accordance with his wishes, he was buried in the town of Gaspé.

Canada was deeply shocked at his death – he was almost an adopted son of the French-speaking provinces. In 1932 they duly honoured him with a monument which stands in Gaspé.

His memory hasn’t faded with time. In 2001, he was inducted into the Québec Air and Space Hall of Fame.